No, a Texas State Representative Didn’t Threaten Beto’s Life with an AR-15

Mark Meckler
|
Posted: Sep 16, 2019 1:05 PM
Share   Tweet
The opinions expressed by columnists are their own and do not necessarily represent the views of Townhall.com. 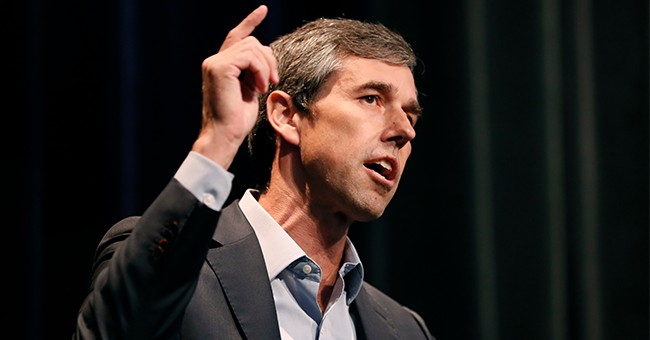 After Thursday’s Democratic debate, a Texas lawmaker’s response to Beto O’Rourke’s unconstitutional gun-grab plan resulted in accusations of death threats and social media shaming.  It was the most exciting – and disappointing – part of the whole, long debate.

The new Democratic platform is far left on every issue, though they try to hide it.  For example, the Democrats have insisted they have no intention of taking away our guns.  Former Vice President Joe Biden recently promised as much. “There's no constitutional authority to issue that executive order when they say 'I'm going to eliminate assault weapons,' because, ‘you can't do it by executive order any more than Trump can do things when he says he can do it by executive order.’"

During the debate, however, one candidate went off message and accidentally revealed the truth. O’Rourke, who has made gun-control a main platform for his campaign, had previously said he believed gun owners would voluntarily give their weapons to police officers.

He apparently has never met a gun owner.

But during the debate, he suddenly changed course.  “Hell, yes, we’re going to take your AR-15, your AK-47,” he boasted. “We’re not going to allow it to be used against our fellow Americans anymore.”

Once the cat was out of the bag, the other Democratic hopefuls weren’t going to let O’Rourke get all of the liberal accolades.

When asked to respond to Biden’s statements about such a gun grab being unconstitutional, Kamala Harris weighed in against the Second Amendment. “Joe, instead of saying, ‘No we can’t, let’s say, ‘Yes we can,” she scolded.

The crowd exploded in cheers, because there’s nothing that gets liberals more excited than an abuse of power.

"Let's be constitutional,” Biden responded.  Then, as if he remembered that he needed to be even more basic, he clarified his statement.  “We've got a Constitution."

After all of Biden’s strange gaffes, he was finally making sense.  But it’s pretty sobering he had to remind the stage of the Constitution’s existence.

On Twitter, the gun-owning Americans expressed displeasure over O’Rourke’s ridiculous machismo. American civilians have 393 million guns, which is approximately 46 percent of the global total of civilian held firearms.  Confiscation is not going to go well for the Feds, and that’s no secret.

The online response to this tweet was worse than the normal political hyperbole.  People claimed the Texas politician had made a death threat toward the candidate, tagging Jack Dorsey, the CEO of the social media company in their emotional tweets.

After O’Rourke got off the debate state, he responded himself.  “This is a death threat, Representative. Clearly, you shouldn't own an AR-15—and neither should anyone else.”

But it was not really a death threat, and it wasn’t even close.

Here are two main reasons why:

In Texas, we have something called the “castle doctrine,” which gives us the ability to defend our homes. If anyone unlawfully enters your home or vehicle, the law is going to assume you had the right to use deadly force against them.

So, how does anyone believe O’Rourke’s gun grab would be enforced?  Now that he’s pushing it beyond a fictional polite acquiescence (which would never happen), what’s the alternative?  What do Democrats think will happen if police show up on someone’s doorstep threatening a man’s house and property?

Cain was right to point out that gun owners will not comply. This is no surprise.

Ken White, a Los Angeles attorney who tweets under the handle @Popehat, pointed this out. “Briscoe’s little gun flounce… [is] rhetorical political hyperbole on Twitter.”

White went on to say that it is not “likely he intended it as other than blustery defiance.”

Sure, Twitter is a private company, and it has the right to silence whomever it chooses.  However, it is not good for America to silence the robust debate around this issue.  Democrats need to deal with the consequences of O’Rourke’s illegal plan now on Twitter, as opposed to – God forbid – after some sort of plan is passed and we have to deal with the consequences on front porches across America.

In other words, he explained, Cain “will use his gun if Beto comes to get it. A reasonable person familiar with the context would not interpret it as a statement of sincere intent to attack Beto with an AR-15.”

White attended Harvard Law School, is a former federal prosecutor, a First Amendment lawyer, and no fan of Donald Trump.  Still, he found the liberal hysteria to be misguided.  “This is “not a true threat. Not, in my view, a close call.”

By the end of the night, Cain’s tweet had been banned from Twitter as a violation of service agreement.

Now we know Twitter also does not allow the free exchange of ideas.