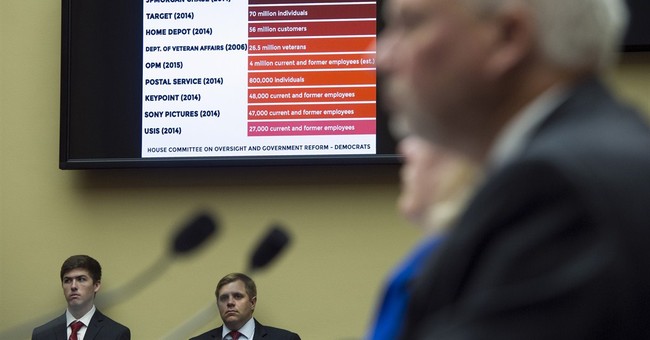 Maybe it’s time to sub-contract a few internal investigations out to foreign hackers. They’ve made more progress with government records in the past month than the IRS has made in two years.

The IRS and Office of Personnel Management both recently discovered massive data hacks in their systems. These breaches originated in countries that are not very friendly toward the United States at present – Russia and China.

China made off with millions of pieces of valuable personal data, including Social Security numbers, from the OPM.

Undetected for nearly a year, the Chinese intruders executed a sophisticated attack that gave them “administrator privileges” into the computer networks at the Office of Personnel Management, mimicking the credentials of people who run the agency’s systems, two senior administration officials said. The hackers began siphoning out a rush of data after constructing what amounted to an electronic pipeline that led back to China.

Thousands of security gaps opened the door wide to those who do not have Americans’ best interests at heart.

At the Nuclear Regulatory Commission, which regulates nuclear facilities, information about crucial components was left on unsecured network drives, and the agency lost track of laptops with critical data.

Computers at the I.R.S. allowed employees to use weak passwords like “password.” One report detailed 7,329 “potential vulnerabilities” because software patches had not been installed.

Auditors at the Department of Education, which stores information from millions of student loan applicants, were able to connect “rogue” computers and hardware to the network without being noticed.

And at the Securities and Exchange Commission, part of the network had no firewall or intrusion protection for months.

One senior administration official admitted, “it’s not a satisfactory answer to say, ‘We found it and stopped it,’ when we should have seen it coming years ago.”

Yet that’s all the answer most top officials at these agencies are willing to give. The Director of the OPM, Katherine Archuleta, failed to explain how this breach happened despite many warnings that security was not what it should be – and failed to present what her office is doing to make sure it never happens again. Representative Stephen F. Lynch finally expressed the exasperation of the American public in the following outburst: “I wish that you were as strenuous and hardworking at keeping information out of the hands of hackers as you are keeping information out of the hands of Congress and federal employees.”

Now that he brings it up, the latest round of Lois Lerner’s emails still hasn’t been handed over to investigators. U.S District Judge Emmet Sullivan ordered a status update by June 29, but considering how the case has been going, it might take until Thanksgiving for the public to learn more about what those emails contain.

Judicial Watch filed a FOIA request two years ago and wants to see what’s been collected. The IRS says it’s still making sure there aren’t duplicate emails in this new batch – something the TIGTA says it already did. So the IRS doesn’t trust its own watchdog? Sounds like more stonewalling to me, but that’s hardly news.

In a similar vein, friend and unofficial advisor to Hillary Clinton, Sidney Blumenthal, turned over emails that show she’s not telling the whole truth about what she knew before the attack on the U.S. diplomatic compound in Benghazi.

“The emails include information regarding weapons that were circulating in Libya and security in Benghazi in the year and a half before the attack” -- exactly the kind of information that Congress had asked the State Department and Clinton to hand over a year ago.

Neither Clinton nor Lerner are facing much accountability for hiding information from Congress and, by extension, from the American public. Yet government agencies are leaking dangerous information to our enemies at an astounding rate.

When will our officials get back to protecting Americans instead of their own skin? When will they learn that “government can’t hide the public’s business from the public”?

Maybe it’s time to just ask the Russian and Chinese hackers. They probably already have a better understanding of what goes on in DC than the actual politicians.