My Email Exchange with Mark Cuban: What Was He Thinking?

Mark Davis
|
Posted: Feb 10, 2021 6:21 PM
Share   Tweet
The opinions expressed by columnists are their own and do not necessarily represent the views of Townhall.com. 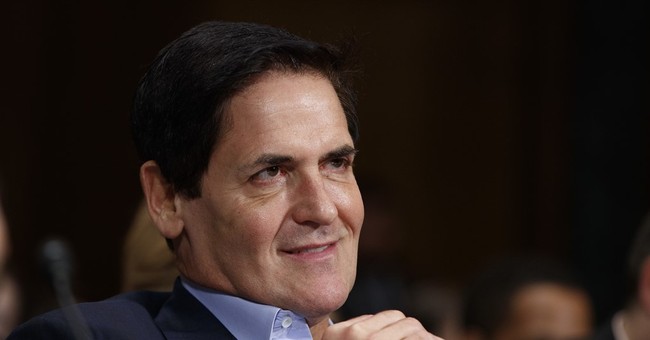 As the story swirls following the announced decision by Dallas Mavericks owner Mark Cuban to discontinue the national anthem at home games, I thought I’d offer up some raw data in the form of excerpts of our frank and constructive Tuesday night email exchange.

The latest development finds the NBA pushing back, making clear that as fans return, all teams will indeed play the national anthem.  The Mavericks confirm that they will comply, but Cuban has added his hope that the passion brought by so many in defending the anthem can be applied to some appreciation to divergent views: “Our hope is that people will take the same passion they have for this issue and apply the same amount of energy to listen to those who feel differently from them.”

So as this moment goes into the books, it is instructive to review how we got here.

To establish the cast of characters, Cuban is the popular Mavs owner who is widely admired here in DFW and around the nation for his business acumen, his generosity, his “Shark Tank” TV profile and an NBA championship we all enjoyed back in 2011.

I’m the talk show host who has enjoyed his exploits and his occasional company on my radio show on 660 AM The Answer.  That means I’ve had some things to say about anthem-kneeling in general over the years, and some pointed criticism of our local teams when that behavior has sullied the sidelines of the teams I root for.

You may remember back in July when a tweet of mine caught Cuban’s attention.  “I am so ready to be in on this year’s #Mavericks,” I offered. “But the minute one player kneels during the anthem, I am OUT.”

Then Ted Cruz jumped all over Cuban’s dismissiveness and they went after each other as I just stepped back to watch.

Tuesday night, I emailed Cuban directly.  I knew I was going to express a dim view of the anthem removal on the air, and that callers would pile on with relish.  I wanted to offer him a chance to appear in person or fire off a few lines of explanation that I would share.  What followed is a back-and-forth that would have made a fine radio segment.  I actually read the bulk of our exchange on the show, and it yielded a deeper understanding of what led to the decision.  So I offer the highlights here, with some reflective annotation:

I began by offering some available time slots with a setup of where I would go:

“So my compartmentalization will be complete disapproval of the nuking of the anthem, tempered by my constant appreciation for the kind of owner, and the kind of person you are.  Those things matter, and I want to have your side represented when callers start to weigh in, because I know how that's going to go.”

He replied with a primer on what led to his decision:

“First, thanks for emailing.

2nd. We had not played it yet at a game this year. I wanted to see if anyone noticed, and I realized we didn’t have fans, but we had media, staff from other teams, etc. No one said a word.  Now the reason why in the first place. Not for any disrespect for the anthem. Just the opposite. Here is the exact logic.

During our games, most people don’t even show up in time for the anthem. You know this. You have been to games.

When they are at the game, on the concourses they don’t stop. Many won’t take off their hats. Some don’t even stand. On top of that the anthem has been weaponized rather than referred to as a symbol of unity.

Do you stop where you are when the anthem is played? I personally do. No matter where I am at. Most people do not.  And as a point of history, are you aware that the Mavericks did not play the anthem at all during the first 16 years of the franchise?

I’m not against the anthem, I’m certainly not against playing it going forward….  I don’t know our plans. I’m going to listen to everyone. But i won’t be bullied one way or another.  It’s easy to say that this is the way it’s always been for the last 100 years. But thats not the way its always been at the Mavericks.

Well, where to go first?  I suggested that games with no fans is an odd place to weigh whether people miss the anthem or not.  Maybe they thought it was omitted until fans could attend, which is actually under way right now.  The return of fans, I said, invites the return of other images of normalcy, like the anthem:

“For the people who are in seats, it means a lot.  Their experience should not be sacrificed because of some stragglers on the concourse level.  As for the 'symbol of unity,' that went out the window when players decided to kneel, a gesture of severe offense to countless fans, no matter how worthy the cause.”

He returned to the fan nonchalance, which makes him wonder why the anthem is such a big deal:

“It’s not 'some,' Mark.  It’s most  Most people don’t show up on time.  Most don’t stop . Where was this response for the first 16 years of the Mavs ?   Doesn't it bother you more that the anthem in sporting events has been weaponized ? it does me. That is the ultimate disrespect.   What if most people feel that it should NOT be played and that was the unifying position?

When I stopped the playing [when the season started in December] I expected someone to say something. There were no fans, but there was staff from both teams, media, etc. We often showed the anthem on television in the past. No one said a word. Not one single word.

Again, no final decision has been made,  but it’s not like the response is all negative, far from it.  Many people are relieved. Does their perspective not count ?”

I replied that maybe some of the relief was from fans who had wearied of years of arguing over something which should be basically understood—that the anthem deserves respect.  I added that to countless fans, the “weaponizing” began with the kneeling.  He then asked the recurring question:

“Why do they need it played at a game? Where was this during the first 16 years when we didn’t play it ?”

Well, I wasn’t here from 1978 to 1993, though I did return to my native Texas the following year.  I wrapped up by stressing that whatever was going on from the Carter years to the Clinton years, the anthem has become a fixture today, and its omission is a sore spot for many in the ticket-buying public:

“It is sad to yank it because some people chose to make it a social justice battleground.  The tragic thing is that the vast majority of fans who recoiled at the kneeling have absolutely no problem with the athletes’ argument that race and policing deserve attention.  It was the choice to rope the anthem onto their soapbox that drew the battle lines.  The NFL got it out of its system, everybody’s point was made.  I wish the same for the Mavs and the NBA.”

So there you go.  Here’s what I’m left with:

Mark Cuban has a thorough appreciation of the America that has allowed him to thrive. There is no merit to the knee-jerk reaction that he axed the anthem out of some fit of activist scorn. But he does not have the core value that I have, shared by millions of viewers of the various sports where kneeling became common—that players may have whatever feelings they wish, and express them in a thousand ways, as long as they do not hijack the national anthem with protest gestures.

The NBA has spoken, perhaps surprising some by standing up for the anthem the league has allowed to suffer such profound disregard.  For fans of Cuban’s team, it is good that the anthem will return.  Let us hope that the kneeling does not.