Thanks, Roseanne, You Blew It for All of Us

Mark Davis
|
Posted: May 30, 2018 12:01 AM
Share   Tweet
The opinions expressed by columnists are their own and do not necessarily represent the views of Townhall.com. 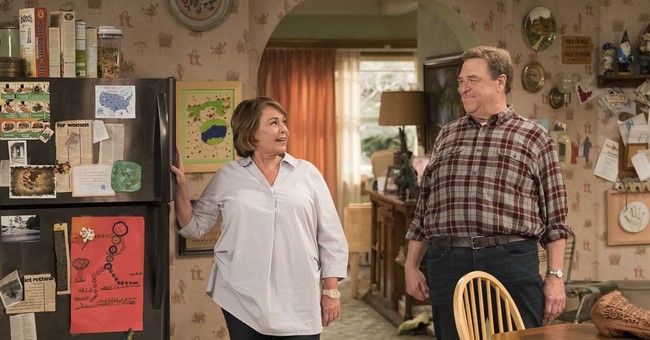 A network TV show rolls out with a favorable treatment of a Trump supporter, replete with plot developments that portray middle American values (and foibles) without the ridicule usually heaped upon them by Hollywood. It couldn’t last.

But no one figured it would be a suicide.

The epitaph for the “Roseanne” TV reboot will read: born 2018, died 2018. Cause of death: the star’s inability to understand one basic fact, and it’s not the one you might think, about watching what you post on Twitter. Liberals can post whatever hateful slime they wish, with few if any career consequences.

No, Roseanne’s blind spot was to an even broader truth: the moment you align yourself with conservatives, you enter a world of zero tolerance. If you are a vulgar comic spewing unprintable hate about President Trump and his family, you get a Netflix show. Roseanne Barr’s show gets canceled for one stupid tweet.

Make no mistake: the tweet was profoundly stupid. Even within the context of a “joke,” the universal Teflon often attempted in moments like this, it was a tragic unforced error that committed the compounding sin of invoking racist imagery.

All together now: What in God’s name was she thinking?

The answer is obvious. She wasn’t. No one ever is when they commit blunders like this. Something about social media has removed some people’s usual brain barrier that exists between thinking something and actually posting it.

I don’t think John Goodman will be missing any car payments, but the rest of the cast no longer stands to benefit from another season (or more) of shows watched by millions, featuring themes that made the show important, an adjective not attached properly to a sitcom since “All in the Family” almost 50 years ago.

It was important not just because it affectionately portrayed a Trump supporter, even though that was a rare and precious attribute. It also caringly painted scenes featuring Roseanne’s thoroughly liberal sister and daughter. In its funniest and most honest episode, the tensions between her and a Muslim neighbor family led to a scene featuring Roseanne standing up for her new Islamic acquaintance in the face of racism from a store clerk.

As fresh as today’s headlines, the final episodes of the first (and now only) season kicked off with Roseanne’s addiction to painkillers. As real as the struggle faced by countless American families, the scripts then turned to husband Dan’s anguish over how to pay for his wife’s expensive knee surgery as his construction jobs dried up and the credit cards maxed out.

Viewers saw their pain, their mutual devotion and their struggle, but the show never forgot to be funny. This is a profound loss. Roseanne’s comic genius made it possible, and her mouthy Twitter politics made the ride even more fun.

But the fun had rules. She had to know that as a rare actress willing to show empathy for Trump and his voters, she would face critics waiting gleefully for her to stumble. She gave them exactly what they wanted, and in so doing gave the left an overhand smash in the form of “There you go, that’s how Trump and his voters feel.” So we not only lose a show we could actually watch, we get to spend some time beating away a slander as well. Great day all around.

Will another network revive “Roseanne?” No time soon. We are often a very forgiving country, but that forgiveness is not afforded to all. Float monkey imagery in a reference about an African-American woman, and you’re going to be done. For a while.

It would be easy to list the constant brutal slurs floated by the Hollywood left against Trump, by entertainers who are still employable, some specifically because of their political and personal venom. None of this matters. It is what it is. Is it unfair? Of course. Is it exemplary of differing bars of outrage for different people? Absolutely.

But everyone in any realm of public life should know that this is the way the field is striped. Maybe it will change someday. Until it does, anyone with a brain stem has to know that a tweet like Roseanne’s is going to detonate a reputational atom bomb.

I am grateful for the one special season of a show that did not insult the minds and hearts of the voters who gave us the Trump presidency. ABC had supposedly made noises about toning down the politics of the show in the recently approved second season. I don’t believe that would have happened. This cast and those writers believed in what they were doing—not a sop to conservative audiences, but a rare and honest snapshot of character types found in countless households rarely represented in the popular culture.

I will always be grateful to Roseanne Barr for bringing this show to life. Now I have to find a way to forgive her for killing it.