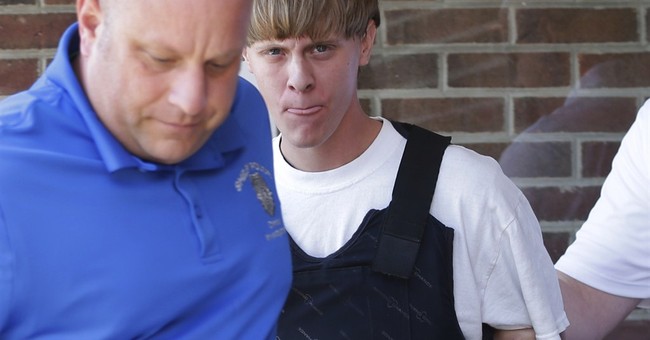 The first words spoken on Thursday morning across America should have been prayerful love and support for the victims of the Emanuel AME Church massacre. And in many corners, that was the case, across racial and political lines, throughout the nation.

But before the evil monster who plied his wicked will in that church was nabbed hours later, we were already treated to the kind of crass, ugly juvenilia that passes for discourse in the era of modern media.

Not just individual social media. Idiots can always be counted on to fill up their Twitter feeds and Facebook pages with the garbage that leaks from their brains to their keyboards. That’s just part of the vast ocean of humanity.

But when people who seek a place at the table of rational debate spout some of the venom on display as this story broke, it is a sad comment on what all of this free speech has wrought.

Freedom is good. No one should seek to stem it because of objectionable content. But what a depressing exercise to wallow through what some folks sought to share when we should have been going about the business of uniting in prayer for our murdered brothers and sisters in Charleston.

A Salon headline proclaimed the shooting as “The Violence White America Must Answer For.” In fairness, this seemed to be a barbed response to the often-asked question of what black communities need to do to stem black violence.

But even if taken at face value as wry sarcasm, it is based on a lie, the supposition that white America spawns Dylann Roofs as numerously as collapsed black families yield black criminals.

No societal ill is the unique fault of an entire race. But when we devolve into gotcha finger-pointing, we can begin to see how race relations can worsen even as real racism dwindles with each passing generation.

Being a racist is the worst attitudinal thing anyone can display in modern America, which is a testament to the rapid path of enlightenment we have traveled. Just before I was born, President Eisenhower had to call in the National Guard so that a little black girl could attend a school. By the time I was fourteen, the most popular TV show in America lampooned bigotry because such attitudes had been chased from accepted social norms. Against the timeline of human progress, that is a snap of a finger.

Of course we still have racists. And we will always have mentally twisted souls who will seek to kill. Some of their acts will be random, from schools to movie theaters. Some may be prodded by noxious hatreds.

When hate appears to be a motivation, it should be another opportunity for us to come together, to decry the surviving shreds of violent bigotry and cooperate to identify and combat the influences that can lead to the adoption of such poisonous urges.

But in an age of such frequent race-baiting, peppered with wholly fictitious shoe-horning of racial baggage into events that show no racial context, the result is unavoidable: a breeding of public skepticism and dismissiveness when real racism rears an occasionally murderous head.

Other opportunities for constructive harmony were blurred by kneejerk agendas. The twittersphere was filled with lunkheads suggesting the gunman will be treated more kindly in the media because of his whiteness. Equally dispiriting were obsessions over whether he would be labeled a “thug” or a “terrorist.”

I winced as President Obama approached the press room lectern in the noon hour. And then I felt bad. Give him an opportunity to lead and uplift, I told myself, maybe he won’t use this as an opportunity to divide or demonize in the midst of— oops, too late, there he went. The tragedy was not an occasion to turn a mirror toward our sinful nature and the evils it can breed; it was a chance to lodge another in a series of craven complaints about guns.

Added to this sorry spectacle was the parade of voices looking to settle cheap political scores at the expense of what should have been a day of dignified reflection.

Race-baiters rolled out a bizarre myth of equivalency calling for “white America” to “answer for” the gunman’s actions, as if there was an epidemic of white behavior that led to hate attacks. Calls were issued for “white leaders” to admit to a silence that suggests consent for the massacre.

Jihadist apologists added layers of their own logical glop, asserting that overgeneralization about whites in the wake of the Charleston shooting is similar to the unflattering assessments of the Muslim world post-9/11.

White people are as capable of evil as members of any other race. When white families break down, the odds of misbehaving kids increase as in other ethnicities. Whites are also surely capable of acts of terror— this church shooting seems to be one, spurred by one of the lowest instincts of all: race hatred.

But rather than an unfettered day glowing with unity and the momentary shelving of adolescent political food fights, we saw a predictable parade of politicization. It dishonored the dead and debased our nation, already reeling from so much needless racial tension.

On an occasion of actual racial malice, we see the effect of those who have used race as a tool to divide and a weapon to attack political enemies. We should be coming together, people of every race and political stripe, to do the simplest, most natural thing imaginable— join in prayer for these victims, that community and our nation. We should also be able to unite in undistracted gratitude that the attacker was apprehended so quickly. Instead, we have to put out malicious brushfires from those who would use this unspeakable tragedy to hawk legislative agendas or take political cheap shots.

While this has been discouraging, I believe the examples of shameful posturing have been outweighed by millions of Americans going about the business of doing exactly the right thing— ignoring the noise, lifting up prayers and reflecting on what we can all do to address the real problem that led to this, and to the shootings in Aurora, Newtown and elsewhere.

Man has a nature riven with sin. Evil waits around many corners to tempt us. It finds easy targets in directionless souls like Dylann Roof, guilty of the same self-absorption and narcissism found in all serial killers: Me, me, me, my problems are so horrible and they are all the fault of others who must be punished.

The reports say that this twisted young man spent an hour hearing the sounds of a Bible study before he rose to turn it into a bloodbath. I dare say that if he had spent regular hours exposing himself to those words he heard Wednesday night, we would not know his name, and Clementa Pinckney and his flock would be alive.

The name “Emanuel” means “God with us.” He surely is, even in times of trial and pain and tragedy. We should look to Him for His loving guidance, to do what South Carolina Governor Nikki Haley described in her Thursday remarks, promising that the lasting effect of this horrible chapter will not be the damage inflicted by an evil attacker, but the solidarity and brotherhood that defines the response.