From Ferguson To Fallujah, The Death of Accountability 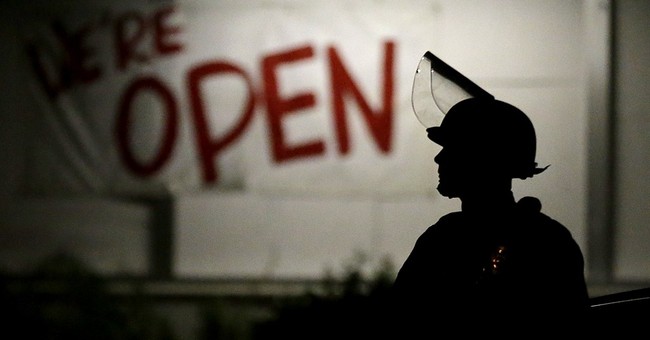 A young black man dies from a police gunshot, and a community bursts into presumptuous anger as if it knows racism is afoot.

That community contains rioters who are not sufficiently condemned by officials at any level, local, state or national.

As images of tear gas clouds in suburbia subside, we are hit with fresh pictures of an Islamist monster beheading an American citizen while warning our President and our people that he and his brethren are just warming up. Attorney General Eric Holder responds by opening a criminal investigation, as if this were a stabbing on a Georgetown street.

Accountability is dead. Long battered against the ropes, the concept of identifying and delivering consequences to the proper purveyors of various evils has been lost in a jungle of political correctness and racial paralysis.

When accountability occurs in an atmosphere of clarity and certainty, our worst problems can get better. One of our worst national problems is artificially-heightened racial discord. One of our worst global problems is the threat of radical Islam. Progress is crippled in both arenas because of the inability, or lack of willingness, to reach proper conclusions about good guys and bad guys, and the lack of spine to deliver proper consequences to the bad guys.

In Ferguson, it is impossible to know for certain which side to take in the shooting of Michael Brown by Officer Darren Wilson. But that doesn’t mean we don’t have identifiable bad guys.

It is bad to bring a self-aggrandizing caravan of race-baiting into that tense town. That would be Al Sharpton.

It is bad to suggest that a “vigorous prosecution” is in order before we have sufficient basis to believe a crime was committed. It is bad to speak of “justice for Michael Brown’s family” without knowing whether Michael was the victim or the aggressor. That would be Missouri Governor Jay Nixon.

It is bad to sashay into Ferguson to weave yarns of past racial slights you have suffered when you know the intended supposition is that Ferguson is a proven source of such mistreatment. That would be Eric Holder.

So there is plenty of bad behavior to go around in the Ferguson mess, but these misdeeds will go unpunished amid a protective media culture in a nation afraid to call out race-baiters.

This should not be surprising, for we are even hesitant to call out rioters. An African-American president and attorney-general would be powerful forces if they were to deliver the following message:

“To all of you who have shattered one window or thrown one rock or defied one police officer: you dishonor Michael Brown’s memory with this kind of criminality. We have no idea what happened in this tragic story, but we must have faith in the system that will investigate it.

“In the meantime, we are to be peaceful. We cannot demand respect while behaving disrespectfully. We will allow no room for violent reactions. We do not yet know what happened in Michael’s shooting, but we do know what will happen to those who protest violently. They will be stopped by all means available to law enforcement so that the streets of Ferguson can be safe once again.”

That’s called accountability. But remember, it is dead.

James Foley is also dead, and accountability is required there as well. It is impossible to avoid righteous fury at the sight and sound of the British-brogued monster next to a kneeling Foley on video moments before slaughtering him.

No, wait, maybe it is possible. Adjusting his tee time by a few minutes Wednesday, President Obama seemed almost as peeved as if he had three-putted on the eighteenth green.reolurr

ISIS’ “ideology is bankrupt,” he proclaimed, following up that sledgehammer with the warning that “People like this ultimately fail.”

Ooooh, failure awaits them? And ideological bankruptcy? I can see caves full of terrorists trembling at the thought. Adding outright comedy to this sorry scene, the CBS news story referred to these mild words as coming from “a visibly angry” Obama.

But if I may craft a little more theater of the mind, these words might be a worthy accompaniment:

“I join every American in condemning this vile act of terror against one of our citizens. ISIS should know that this act of war against the United States will be met with our strongest possible response. Terrorists everywhere should know that we will do whatever is necessary to destroy their ability to attack us in our homeland or in theirs.”

But accountability is dead.

If it can be revived by Obama’s successor, it will involve the courage to look into the gaping cauldron of radical Islam and speak its name.

It is easy to make clear that even though Islamofascists are in a religious war against us, we are not in a religious war against them. We have no quarrel with the peaceful Muslims in America or anywhere in the world. But from a terror cell in a suburban garage to a swelling ISIS movement across the Middle East, an American President should make clear that we will not tolerate aggression against our people.

That will involve a complete reversal of the Obama doctrine of cut and run. That ill-fashioned plan has sprouted the nightmares we face today, across a landscape where terrorists are aware of the death of accountability, and are planning God-knows-what to fill the vacuum left in the wake of our departure.

Some Americans are willing to hold rioters accountable and shame race-baiting opportunists. It needs to be a vast majority.

Some Americans are willing to speak truth to the evil of radical Islam. It needs to be a vast majority, including the occupant of the Oval Office.

When we develop the spine to do these things, we will have less rioting, less race-baiting and less terrorism. Our current path of coddling and protecting these bad behaviors will only lead to their further spread.

It won’t happen with the flip of some magic switch. It will require years of attitudinal change. Broad revulsion following the spectacles of Ferguson rioting and an American murdered by a terrorist on camera are a good start.