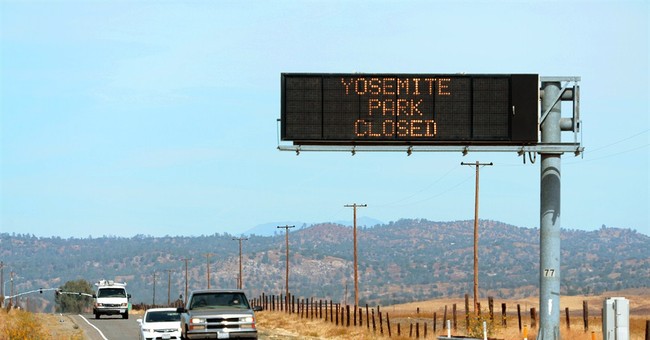 I hate to interrupt an indulgent festival of angst, but the parade of voices lamenting this period of government shutdown just cries out for a rebuttal.

First, let’s stipulate that anyone enduring general hardship during these days-- a furloughed worker, an underserved citizen, a family with rattled vacation plans-- deserves our genuine empathy.

That said, can we please dispense with the drama better suited for an asteroid hurtling toward the earth?

From Monday’s goofy “shutdown clocks” ticking off the seconds to anarchic Armageddon, to the litany of analysts over-hyping the negatives of the standoff, the overreactions have been tailored by, and for, people for whom government is a sacrament and its interruption a sin.

The truth is somewhat calmer, and actually has some redeeming elements.

First, the conservative’s easy quip: any shutdown reveals just how much of government is truly “non-essential,” accentuating how wildly it has ballooned beyond the founders’ intent.

And the one-liner of record: the only thing wrong with government shutdowns is someone invariably opens it up again.

But beyond the glibness, there is a valuable civics lesson here for those willing to step out of needless panic mode.

CNN’s Fareed Zakaria called the whole chapter an exercise in “stupid government,” without suggesting which side should smarten up and cave on its core beliefs. One might hazard a guess based on his other journalistic moment of the week, an interview with National Security Advisor Susan Rice without one mention of Benghazi.

But media bias aside, the public itself needs to see what is on display here.

It is not so much “dysfunction,” as every headline proclaims to a nodding public. It is actually the precise result you get when everyone actually sticks to principle.

ABC interviewed a busload of middle school students buzzing from monument to monument before they all closed their doors Monday.

“I think it’s very disappointing to me,” said one, “because it’s kind of sending the message that government cares more about their parties... than they do us, the American people.”

Ah, sixth grade. But I am restrained from any observation about youthful folly, because millions of adults agree with this kid.

I know well the people who are trying to stop the scourge that is Obamacare. They are drawing lines in the sand to protect that kid’s family from the the so-called Affordable Care Act’s assaults on liberty, the economy and actual physical health.

And from my partisan perch, let me offer a possible surprise: I believe most of the people arguing for Obamacare actually believe it is good for the country. That means this is not driven by people looking for shallow political gain, but by two sides with wholly different perspectives on government in our lives.

Note I said “most.” There are surely those on the left smart enough to know it is a knife to the heart of American liberty and prosperity, which is why they want it. Liberty and prosperity are enemies of the statist, who seeks an ever-broadening dependent class to rely on expansionist government.

But dispensing with what motivates both sides for a moment, the shutdown is a refreshing moment against a backdrop of history replete with compromises that have not served us well, usually because it is conservatives who have caved.

So in this precious season, there are actual Republicans standing on sound conservative principle, refusing to be rolled by Barack Obama and Harry Reid.

If the price we have to pay for this is an equally resolute Democrat party, that’s fine with me. Their steadfastness is a window to their souls, too.

I feel our side racking up a point or two every time Reid bats away a sensible funding measure that would open up the government immediately. Even with a loud media chorus chanting as expected that this is all Republicans’ fault, there is a growing feeling in America that this is a shared standoff, with pressure building on a White House that has already delayed its masterpiece legislation for a year for employers.

So why not for employees? And why not make Congress live under Obamacare like the rest of us?

We win those questions because they do not require answers based on pure conservatism. They appeal to the sense of fairness in most people.

So with the mid-month debt ceiling turnstile ticking ever closer, I hope this can unfold as a chapter of actual conservative leadership by House Speaker John Boehner, and an actual display of unity from those who serve in the House with him.

The left is already looking shrill and short-fused as the days of shutdown unfurl. Conservatives should stay the course, calm in the comfort that stopping Obamacare is a noble crusade, not to be abandoned because of the middling stresses of a brief shutdown.

And if the standoff is not so brief? The more valuable the lessons learned at its end, hopefully lessons that the economy and our freedoms have been at least temporarily spared the poison of Obamacare.