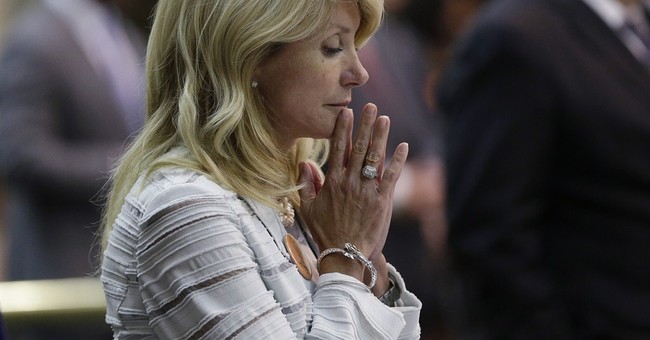 Here in Texas, the new heroine of pro-choice America is an interesting installation on the throne of radical pro-choice admiration.

She is a tough and talented Democrat State Senator from a historically Republican district who has positioned herself skillfully as a moderate Democrat just looking to save education funding from current budget austerity.

She narrowly fended off a Republican challenger last year, and faces an eager field of GOP primary candidates looking to unseat her next year in a quick turnaround forced by a quirk in Texas Senate election law.

One wonders how her Fort Worth-area voter base is feeling now that she has mortgaged her pleasant centrist mantle to become a modern-day Margaret Sanger, directing her energies toward widening the latitude for terminating pregnancies.

Wendy Davis was never pro-life, but you generally have not found her spewing the kind of venom she has adopted as a darling of radical pro-choicers.

Days after her Austin filibuster that wound up delaying a vote on a Senate Bill that would have enacted meager abortion restrictions, her website now refers to Governor Rick Perry (and, one presumes, all pro-lifers) as part of “an attack on women and families.”

So just to get this straight: I am fighting for the unborn, many of whom could grow up to be proud women of accomplishment in the Wendy Davis mold, and I am attacking women and families, while Wendy and her allies, fighting to allow more carnage in the womb, are champions for women and families?

Just seeing how the field is striped. Let’s proceed.

There are some who say Sen. Davis will leave the middling power of the State Senate to run for Texas Governor next year.

But make no mistake-- in a state where Democrats are starved to occupy any statewide office, she is instantly the biggest star they have, immediately outgunning the previous subject of mild gubernatorial buzz, San Antonio Mayor Julian Castro.

So the political winds blow with intrigue here in Texas this week. Wendy Davis has become an instant superstar on the state and national stage while surely alienating some moderates and even Republicans who voted to send her to the State Senate.

She will need even more comfortable sneakers if she plans to filibuster Senate Bill 5 again when it returns to the light of day next week. Gov. Perry wasted no time calling an additional special session which will not provide the same window for hooligans to shout down the will of the people.

I do not refer to Sen. Davis in that vein. Her filibuster was (mostly) by the book, and she deserved her time in the spotlight. But the Senate vote afterward-- sadly past the midnight deadline-- was 19-10 in favor of the abortion limitations, and that is not likely to change.

Lieutenant Governor David Dewhurst is being grilled for failing to exert sufficient control to get the vote in by the special session deadline.

But he probably would have been torched even more if he had cleared the hall and forced a vote. Wendy and her fans are mightily enjoying the grotesque sexism of characterizing this as a pretty little lady against some mean old men who want to trample women’s rights.

Those with her put on quite a show Tuesday night as the clock ticked down. Hooting like outcasts from an Occupy rally, spectators shut down the Texas Senate chamber as actual elected officials egged them on.

That nonsense will fail in the new special session, which provides weeks to allow Texas voters to see final success for the abortion restrictions a majority of them favor.

Once that passes, the stigma of Lt. Gov. Dewhurst’s tough night will probably be forgotten. But what will be remembered of Wendy Davis’s part in this drama?

Her stock is probably down a tick in her own district now that she has decided to channel less Claire McCaskill and more Barbara Boxer.

But on the Texas stage, and surely nationally, she is on the rise. Her current cause will fail in the short term, and there are more than a few babies who will be born as a result.

How will it feel to have fought against those new lives? I genuinely wondered, while hearing the happy cheers of the rabble that temporarily thwarted the vote-- what exactly are they so thrilled about? What is there to be so ebulliently proud of?

I have been around Wendy Davis a few times, and have found her skilled, smart and profoundly likable.

But now she has punted a rare attribute-- bipartisan affability-- to cash in with Planned Parenthood, radical feminism and the corridors of Obama’s America where opponents are to be personally derided and babies past 20 weeks in the womb are to be endangered.

It will probably work out very well for her. But I will miss the kind of leader I thought she was.