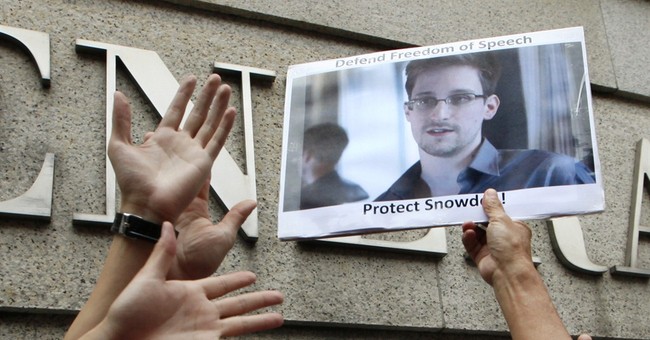 After a week of enduring the crossfire over the relative benefits and dangers of the deeds of NSA leaker Edward Snowden, I am left wondering whether this has been good or bad for our nation.

The answer depends on the lens we use for viewing America and the world.

I belong to two groups that are not large enough. The first is the portion of America that is very, very serious about fighting terror. I have not forgotten 9/11 or the fact that its hatchers would love to do it again.

Stopping them has been an all-consuming pursuit for our intelligence gatherers and analysts, and their success rate has been positively stunning.

I also belong to the segment of America that has had it up to the eyeballs with the Obama administration, from the bad policies to the dishonesty to the weak foreign policy to the targeting of political enemies. 2016 cannot get here fast enough for me.

Added up, my result is a general willingness to allow wide latitude in surveillance, tempered by concerns over its possible abuse.

I had the very same position as the Patriot Act was being hammered out while smoke still rose from Ground Zero. The deciding factor in my decision to support it was the faith I placed in George W. Bush and Dick Cheney to use that information to catch terrorists without spying on my phone calls and e-mails.

In the wake of the IRS disaster, the Benghazi deceptions and the basketful of other scandals-in-waiting, it is very hard to similarly trust this administration as it holds that intelligence apparatus in its hands.

But I will. For now.

I am able to do so because unlike the IRS, which was easily corruptible with its ranks of employees eager to please a boss who demonized Tea Party groups at every turn, our intelligence services operate in another landscape. They are not so easily tainted.

Unlike Snowden, who decided to recoil at tactics that have kept us safe, the average NSA analyst is proud to be part of the effort that has prevented further 9/11s. They are not a lock-step gung-ho robot army, but few are the ones who awaken to suddenly shudder at procedures laid out and practiced for a dozen years.

But Snowden did, and rather than step with courage into an American courtroom to make his case and dare our system to punish him for his perceived heroism, he hunkers in Hong Kong, happy to let its people and its justice system handle his fate.

He is missing out on a certain love-fest he would receive here from Americans more worried about potential Orwellian nightmares than the real threat of Jihad.

There is no doubt that a government that can dig into our phone calls and e-mails can surely ruin our lives if it has a mind to. But the police department that arms its officers can also wantonly kill us. The military that fights our wars could also order us into concentration camps.

Here’s an idea: How about if we wait for abuse to occur before we lament it?

The IRS story is a blatant example of government overreach brought to bear to the detriment of a president’s political enemies. It happened. All we have to do is get to the bottom of how.

The NSA panic is all based on what people with all of those security clearances could do, might do, if their motives turned dark.

Show me a litany of people whose lives have been needlessly assaulted by NSA snoopers, and I’ll jump onto the indignation wagon with Snowden, Rand Paul and his Dad, and anybody else up there weaving stories of “turnkey tyranny.”

Until then, the only thing I want to say to Ed Snowden’s besmirched colleagues is: thank you.

Thank you for the painstaking work you do every day on the off chance that a call that looks innocent today looks very different when a number shows up on the phone of the terrorist we catch tomorrow.

The voices raised in alarm over this practice either don’t know or don’t care that dots cannot be connected unless you have all the dots.

This is not to say that their concern is without merit. Privacy is a basic demand of citizens overseen by a powerful government, and it is useful to debate how to balance it against security interests.

But that debate should not be started by an activist narcissist who has soured on his NSA job.

Know who could have started the debate? Our Director of National Intelligence, James Clapper. On that fateful day in March when Oregon Democrat Senator Ron Wyden asked if government were collecting “any type of data” on millions of Americans, the answer should have been: “Senator, as you know, I can in no way comment on the degree or specifics of the methods we use to gather information in our effort to stop terror attacks.”

At that point, Wyden, or Snowden, or anyone in between could have tried to raise a chorus of dissatisfaction with the fact that secret things need to remain secret.

So as I restrain myself from faulting surveillance tactics under Obama that I favored under Bush, I join the call for similar consistency from the left. Any liberal defending these practices today owes Bush an apology. Joe Biden can start.

Meanwhile, we should all retain our vigilant alertness to misuse of power.

My mistrust of this White House runs deep. But I retain my belief in the countless men and women of the NSA, CIA and other intelligence agencies. Their pursuits are within both reason and the law.

If anyone were to subvert their tasks -- if anyone in authority were to try to use anti-terror investigative tactics to unduly spy on the innocent, we would then have genuine violations of law, and they would be called out by a genuine whistleblower, which Edward Snowden decidedly is not.