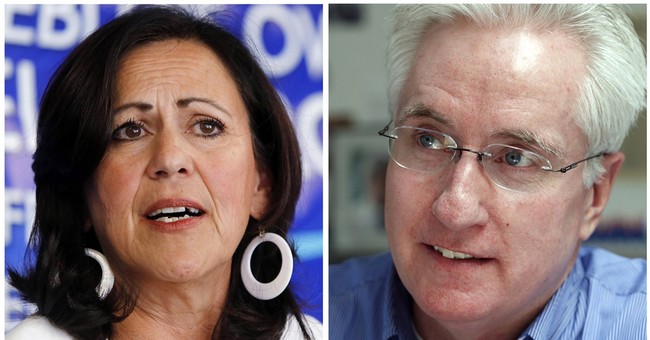 A delicious event happened in Pueblo, Colorado this week.  And forty-five miles north of Pueblo, a parallel phenomenon was unfolding in Colorado Springs.  Two Democratic state senators, including the President of the Senate, were recalled from office by a vote of their constituents.

Sure, this was big news across the country, covered by all the networks and all the radio talk show personalities.  But something far more significant than a recall had taken place in Colorado; something revolutionary.

The old guard watched and the grassroots won.

In 2010, Rob Witwer and Adam Schrager wrote the book, The Blueprint: How the Democrats Won Colorado (and Why Republicans Everywhere Should Care).  Witwer, a former Colorado State Representative, and Schrager, a political journalist, forced smug Republicans to stare at the devastation of their former Shangri-La with a disturbing exposé.  In 2004, Colorado’s Governor and both United States Senators were Republicans and the GOP held the majority in both the State House of Representatives and the State Senate.  In November of 2012, Colorado Republicans lost the last of those strongholds when the Democrats took majority control of the State House.

During the 2013 session of the Colorado State Legislature, the Democrats gorged themselves on a cornucopia of liberal utopianism.  They force-fed the system with irresponsible spending, social radicalism, voter fraud concessions, and gun control.  The only sign of scruples during this gluttonous frenzy came from the closet liberal Democratic Governor, John Hickenlooper.  During the first two years of his term, the Republican-controlled House prevented radical bills from reaching his desk.  But his moderate branding was rapidly sullied this year when he chose ideological loyalty over a comfortable re-election for 2014.

The gun control bills that Governor Hickenlooper signed were enough to invoke a Colorado boycott from hunters and to chase weapons manufacturer Magpul out of the state.  But the new laws were not enough to bring the disjoint Republicans together against a common enemy.  Internal factions of the party are readily discernible.  And far more energy is expended on internal positioning than on collective strategizing to defeat the Democrats.

But last week, the laws of attraction naturally came into effect for free radicals across the Rocky Mountain State.  People who had never before been involved in politics launched recall election efforts.  Colorado Springs resident Keith Coniglio actually sold two of his personal firearms to help fund the effort.  Eventually, these independents, Republicans, and even some Democrats coalesced to form a patriotic battle cry for their Second Amendment rights.

While this recall effort would be the natural province of the state Republican Party, the organization seemed to watch the grassroots effort as a passionless observer.  At one point, the Libertarian Party stepped up to the plate, providing much needed legal funding.  At the county level, the Pueblo Republican Party showed its moxie.  County Chair Becky Mizel led an army of citizens willing to brave the lopsided registration disadvantage to bring the victory home.

But the key component to the win was overcoming the Democrats’ expertise in creating opportunities for voter fraud.  The liberal party pulled out all the stops, leveraging their newly-passed law that allows anyone to vote who merely states his intent to move into the district.  Their tactics were sponsored by a $350,000 investment from New York City Mayor Michael Bloomberg.

But the outcome pivoted on the masterminding of vote integrity by crusader Marilyn Marks of Aspen, Colorado.  Her management of the legal challenges forced the hand of county clerks to hold the elections in polling places only.  Mail ballots were eliminated and along with it the standard opportunities for Democratic Party mischief.

Early returns in Colorado Springs foretold the abrupt cancellation of Colorado’s State Senate presidency.  Within an hour of closing the polls, Senate President John Morse conceded.  At the same moment, the Pueblo County Republican Chairman texted that they, “May not pull it off…”  But her stress turned to celebration as polling places added their returns toward a double-digit win over Senator Angela Giron.

The scrappy hyenas who brought down this wildebeest are satisfied in their victory.  They are enjoying the meal and sharing it with the rest of us.  But when a lion arrived after the hard work was done and claimed the kill for herself, the conviviality became strained.

A fundraising email was blasted out under the name of Republican National Committee Co-Chair Sharon Day with the subject line, “We won.”  Colorado Republican State Senator Kevin Grantham responded defensively to Co-Chair Day with this objection, “You mention that you gave support to the local grassroots – fine. But you say that it is ‘our conservative grassroots’. Not from what I saw. I saw conservatives, libertarians, tea-partiers, 9-12ers, constitutionalists, and union Democrats come together, most of whom have no use for the RNC, most of whom I know by name, and beat back Bloomberg’s money.  What I didn’t see was you.”  Ouch.

Patriots with no political title, no position in the GOP, and no aspirations for elected office pulled their personal talents and treasure together, got the job done and went home.  There is a lesson here, and it is an enormous one.  Where the jealousy is for power, the pledge is for centralized control and the effectiveness is anemic.  Where the jealousy is for liberty, we mutually pledge to each other our Lives, our Fortunes, and our sacred Honor.