Marita Noon
|
Posted: May 02, 2016 11:00 AM
Share   Tweet
The opinions expressed by columnists are their own and do not necessarily represent the views of Townhall.com. 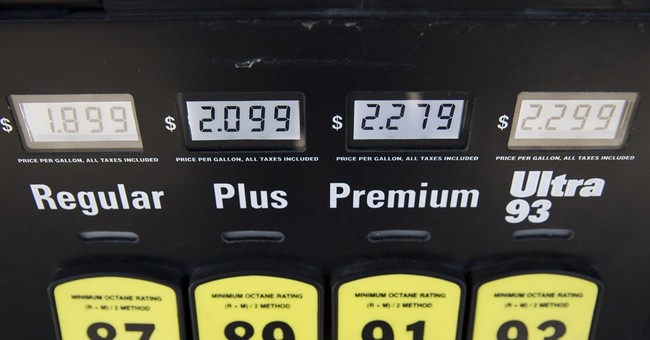 All of us loved less-than $2 a gallon at the pump. AAA reports: “Americans paid cheapest quarterly gas prices in 12 years”—which resulted in savings of nearly $10 billion compared to the same period last year. However, oil (and, therefore gasoline) has been creeping upward since the February low—topping $45 a barrel, a high for the year. And that could be a good thing.

While low prices at the pump have been a boon to consumers, the plunge in oil prices has been a bust for American producers.

You may not care about “big oil,” but there’s still reason to be positive about the rising prices.

There are several causes for uptick. First is the weaker U.S. dollar. As oil is traded in dollars, a weaker dollar means that it takes more of them to buy the same amount of oil.

Additionally, we are heading into a busy summer driving season and refineries are switching to the more expensive “summer blend.” The switch typically means a brief shut down for maintenance—which reduces the gasoline supply. Summer driving increases demand.

These are all supply issues that can easily be eradicated with increased production—such as recently threatened by Saudi Arabia’s Deputy Crown Prince Mohammed bin Salman. Additionally, in the U.S., reports Bloomberg: “Drilled, uncompleted wells could return 500,000 barrels a day back to the market.” The potential for increased production has many, including Daltorio, predicting a fall in price from current levels.

Consumers like lower prices, but they signal economic concerns as the price of oil is directly connected to the global economy.

In February, a Citibank strategist warned that due to the extended oil price collapse, the global economy “appears to be trapped in a death spiral.” Eric Sharpe, Publisher at Energy Ink Magazine, states: “Citi’s assessment is clear, and easy to understand: weak global growth results in continued depressed oil prices as demand weakens under over-supply.”

This is why I posit higher prices are a good thing for everyone, not just the oil industry.

Simple economics are based on a supply vs. demand formula. So far, I’ve mostly addressed the supply side. But a careful read of the forecasts indicates an increase in the demand side. Sharpe points out: “The single most important factor for the stabilization of oil prices is for demand to outpace growth which it has not done for over two years. Though demand growth is slow, it is still climbing.”

On April 23, the Financial Times reported that commodities, led by oil, rallied “on signs of stronger growth” that bolstered demand. It also referenced: “better housing and infrastructure demand after China’s economy rebounded in March.”

On April 27, in a story about the price of oil hitting “another 2016 high,” WSJ addressed the fact that the Federal Reserve officials “left interest rates unchanged.” The last time the same decision was made, the statement included language that indicated the global economic and financial conditions posed risks to their outlook. This time, that was removed—“signaling less concern about risks posed to the U.S. Economy by global financial conditions.” In WSJ, Robert Yawger, director of the futures division at Mizuho Securities USA, is quoted as saying: “The elimination of international elements in the language may mean that the market feels that the international situation is improving, and we’ll get a bit of demand from emerging markets which wasn’t there.”

Additionally, Phil Flynn, Sr. Market Analyst at the PRICE Futures Group, in his daily energy report, on April 22, wrote: “Demand is busting out all over.” He explains: “Low gas prices are causing a buying frenzy at the pump as gasoline demand in the month of March hit an all-time record high.” He continues: “it’s not just gasoline demand, it is oil demand all over. Not just here in the United States but also in China. China reported that crude-oil imports in March were up a whopping 21.6% from last year coming in close to 7.7 million barrels a day. …China’s demand for imported oil is stronger than it has ever been.” He also addressed; “the strongest ever volume increase in Indian demand.”

There is growing demand.

“The market is coming in better balance,” Jason Gammel, an analyst at Jefferies, stated, according to the WSJ. “We maintain the view that the current oversupply will flip into an undersupply in the second half of the year.”

While this is good news for the oil industry, it is also good for everyone—even though it means higher prices at the pump. If this optimistic view is correct, it means the global economy—despite the bad economic news on the American front—may be heading toward a net positive; that it is not “trapped in a death spiral.”

A growing economy needs energy and that is why higher demand—that equals higher prices—is good for everyone.