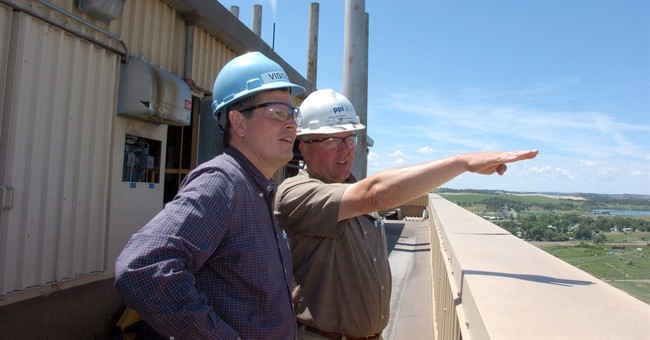 Following a rough week for Obamacare, the President, understandably, wants to pivot to anything other than the devastating coverage of HealthCare.gov.

On Friday, November 8, Obama arrived in New Orleans to talk about improving the U.S. economy. There, he drew attention to the already forgotten government shutdown: “there’s no question that the shutdown harmed our jobs market. The unemployment rate still ticked up. And we don't yet know all the data for this final quarter of the year, but it could be down because of what happened in Washington.”

Yes, 850,000 furloughed federal employees may have tipped the scales, but really they all got a free 16-day vacation. They were, ultimately, all paid.

Obama wants to blame the 16-day federal employee paid vacation on the Republicans—and there may well be fault there. But what about the thousands of jobs that have been lost due to the polices of his administration—people in the private sector who have been out of work for more than 16 months?

Because of what happens in Washington, thousands—if not millions—of private-sector employees have, effectively, been permanently furloughed and/or new jobs are not created as a result of the Obama Administration’s war on energy.

A quick search using the phrase “jobs lost due to coal-fired power plant closures” produces a plethora of stories with hundreds of job losses. Nearly 300 coal-fired power plants are being shutdown across the U.S. due to EPA regulations—which according to the American Coalition for Clean Coal Electricity (ACCCE) is “five times greater than the EPA predicted would be forced to shut down due to its regulations.” Mike Duncan, President and CEO of ACCCE, says: “The EPA continues to downplay the damage its regulations are causing to the U.S. economy and to the many states that depend on coal for jobs and affordable electricity.”

In Massachusetts, the closure of Brayton Point Power Station—which is the second shutdown in the region, will cost 240 jobs.

A Fox News story about the closure of coal-fired plants in Georgia that will result in the loss of 480 jobs, states: “several utilities have made similar announcements, saying they opted to close aging coal plants rather than pay hundreds of millions of dollars to install pollution-control equipment to comply with federal clean-air rules.”

In Pennsylvania, the closure of two plants has resulted in the loss of 380 jobs. Melody Longstreth, executive director of the Waynesburg Area Chamber of Commerce, blames the EPA for the jobs losses: “Unfortunately, regulation affects everybody, whether you’re a mom-and-pop business all the way up to that.” Her colleague, Muriel Nuttall, executive director of the Fayette County Chamber of Commerce, adds: “In addition to job losses at the plant, the closing will have a ‘domino effect’ on related jobs, such as truck drivers and barge operators.”

Congressman Tim Murphy (R-PA), who represents the district where the Pennsylvania plants are located, laments: “The front line in the administration’s war on coal is right here in Southwestern Pennsylvania, and the casualties are the factories and homeowners, who will pay higher electric bills, as well as the hundreds of utility workers, boilermakers, and miners who will be out of work. With the shutdown of the Mitchell plant and Hatfield’s Ferry, which just four short years ago underwent $1 billion in upgrades, the president is making good on his promise to ‘bankrupt’ anyone who operates a coal plant.”

These closures result in jobs lost at the power stations and the surrounding communities, but they—along with additional EPA regulations—also cause the loss of jobs at the coal mines.

Addressing the Mitchell and Hatfield’s Ferry plants, Phil Smith, a spokesperson for the United Mine Workers of America, said: “It’s clearly going to have bad implications for coal miners.”

According to a report in the Herald-Standard, about a quarter of the coal-fired plants that have been closed or are scheduled for shutdown, buys, or has bought, coal from Alpha Natural Resources. Company spokesperson Samatha Davison states: “By all indications, regulators in Washington are intent on limiting the production and use of coal, the most abundant domestic energy source we have in America. With that said, this is another example of how the EPA regulations are impacting the electricity-generation business and the coal industry.”

Much of the coal comes from Kentucky. Bill Bissett, President of the Kentucky Coal Association, told me about the loss of thousands of jobs as a result of EPA regulations: “Eastern Kentucky has lost more than 6,000 direct coal-mining jobs. For every one direct mining job lost, three other Kentuckians lose their livelihoods with the loss of indirect jobs. Beyond this loss of direct and indirect employment, you also have the loss of what is called induced jobs, which are unrelated directly to the mining of coal, but negatively impact automobile dealerships, restaurants and anywhere these former direct and indirect employees spent their paychecks.”

The regulations coming from the Obama Administration are not just hurting mining jobs through the expensive and excessive rules on power plants, but through retroactively blocking new mining projects such as the Mingo Logan mine in West Virginia. The decision on the part of the EPA to withdraw specific parts of a permit after it was issued is unprecedented in the history of the Clean Water Act. The Mingo Logan permit was issued in January 2007, by the Army Corps of Engineers and authorized discharge from the Spruce No. 1 coal mine into nearby streams. Nearly three years later, the EPA published a final determination on the permit that withdrew those disposal sites.

The EPA’s decision is an example of bureaucracy at its worst and has sparked bipartisan criticism from West Virginia’s Congressional representatives. Senator Joe Manchin, a Democrat states: “One agency grants a permit, another agency takes it away and business suffers in the end. The federal government should be an ally, not an adversary, in helping to strike a balance between protecting the environment and creating good American jobs.” Likewise, Republican Representative Shelley Moore Capito said: “The Environmental Protection Agency has continued to overstep its bounds in its efforts to implement the president’s anti-energy policies. Not only will this ruling cost West Virginians hundreds of jobs, but it begs the question: Who is safe?”

The Mingo Logan case will continue to be played out in the courts. Meanwhile, Senators Manchin and David Vitter (R-LA)—who is also the top Republican on the Environment and Public Works Committee, have issued a letter to the EPA regarding its “extreme approach.” They are demanding information from EPA about the revocation of Mingo Logan’s previously approved federal permit. In the letter, the Senators point to the company’s “faithful compliance with the permit’s terms”—yet, the EPA's unprecedented actions unilaterally revoked the permit.

The Obama Administration's control of permits is also impacting the oil-and-gas industry,which even in its fettered state is largely responsible for the private sector job growth. A recent EIA report states that from the start of 2007 through the end of 2012, total U.S. private sector employment increased by about 1%. “Over the same period, the oil and natural gas industry increased by more than 162,000 jobs, a 40% increase.” But there could be much more.

Before the Macondo Well accident, analysts expected 45 rigs to be operating in the Gulf by 2013. In a recent investors’ report, the International Strategy & Investment Group said: “After essentially being left for dead following the devastating Macondo blowout, we believe the deepwater Gulf of Mexico is in the early stages of an extended growth cycle.” Only 38% of deepwater reserves are currently producing oil, while an additional 60% are in appraisal, development or discovery status. Today there are 40 rigs currently under contract in the Gulf.

While drilling permits are being issued in the gulf, it is, according to Senator Vitter at “an anemic pace.” The National Ocean Industries Association (NOIA) confirmed that it now takes on average 108 days to get an offshore drilling permit, twice as long as the average 54 days it took pre-Macondo.

Earlier this year, the House of Representatives passed the Offshore Energy and Jobs Act (H.R. 2231), which directs the Secretary of the Interior to “implement a leasing program that includes at least 50% of the available unleased acreage within each outer Continental Shelf (OCS) planning area...”

Regarding H.R. 2231, Randall Luthi, President of NOIA, issued a statement that includes: “Opening up more of our OCS to energy exploration makes good sense and even better cents, adding thousands of domestic jobs and potentially billions of dollars in state and Federal revenues.”

A report released last month from the Consumer Energy Alliance found that more than 10,000 new jobs could be created if exploration and production were to take place in just the mid-Atlantic region of the OCS. A thorough economic analysis by the American Energy Alliance found that the potential resources in the OCS alone could sustain 1.2 million new, full-time jobs per year over the next 30 years if the OCS is authorized and permits are granted.