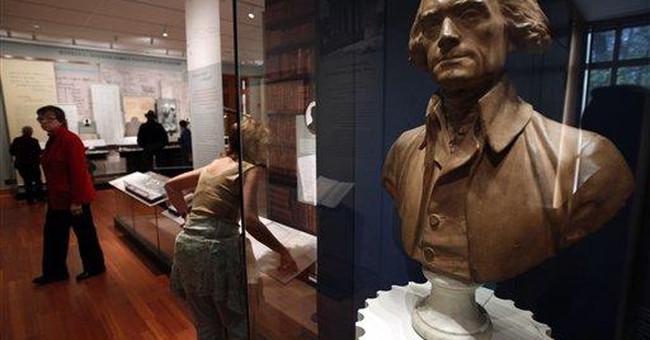 Now that several days have passed since President Obama “forgot” the Creator while quoting the Declaration of Independence in his speech before the Congressional Hispanic Caucus (see video here), and my blood pressure is back down from 190/110, perhaps I can take a measured moment to comment on the big picture.

Much has been written trying to figure out if President Obama did this deliberately — in effect, declaring war against this vital foundational principle — or whether he just misspoke, like the time he referred to his “Muslim” faith. The truth is that it does not make much of a difference.

President Obama has “forgotten the Creator” in many of the policies he has enacted and supports. And those inalienable rights President Obama referenced cannot stand apart from the One who gave them to us.

Thomas Jefferson, author of the Declaration of Independence, famously said:

God who gave us life gave us liberty. Can the liberties of a nation be secure when we have removed a conviction that these liberties are the gift of God? Indeed I tremble for my country when I reflect that God is just, that his justice cannot sleep forever.

The first of the inalienable rights given to us by our Creator mentioned in the line of the Declaration of Independence the President quoted is the right to life. But President Obama is now known as the most pro-abortion president in history.

One of his first official acts as president was to overturn what is known as the “Mexico City Policy,” which prohibited federal funding of international “family planning” groups that provide abortions. Along with that, he pledged support of the highly controversial United Nations Population Fund that supports China’s one-child policy.

President Obama signed an executive order allowing federal funding of embryonic stem cell research as long as private funding is used to kill the embryos. He supports the Freedom of Choice Act (FOCA), the Prevention First Act (PFA), and the U.N. Convention on the Elimination of All Forms of Discrimination Against Women (CEDAW), all pro-abortion legislative efforts that will be disastrous for women.

By now everyone knows that abortions are included in ObamaCare, despite the President’s empty promises to the contrary. And just days ago, the Senate tried to ram through a Defense Authorization Bill that included an amendment to allow abortions to be performed on military installations all over the world.

President Obama promotes these policies even though he has said repeatedly that he is not sure when life begins. Remembering the Creator would have him turn in a different direction and maybe proceed with much more caution.

Before I formed you in the womb I knew you; before you were born I sanctified you. — Jeremiah 1:5

The second of those inalienable rights mentioned in the Declaration is liberty. But President Obama envisions only a partial liberty for Christians and other religious groups that oppose homosexual activism and want to protect the traditional definition of marriage. He supports the repeal of the Defense of Marriage Act (DOMA), supports “hate crime” legislation that can be used to silence Christian teachings, supports the Employment Non-Discrimination Act (ENDA,) and has made sure his administration promotes “gay adoption,” a practice that has forced many Christian adoption agencies to stop rendering services.

In the aforementioned Defense Authorization Bill, liberals tried to force a repeal of the ban on homosexual conduct in the military, something Obama knows will result in the censorship of pastors and the Bible’s teaching on homosexuality.

The pursuit of happiness is the last example of our inalienable rights in that line from the Declaration. And once again, the policies promoted by President Obama are making it harder every day to pursue that dream. His vision puts the government in charge of our private health care decisions, picking winners and losers in the marketplace and silencing dissenting opinion.

His radical appointments are a clear example of his distorted vision for America. His first judicial appointment, David Hamilton, was a judge who ordered the Speaker of the Indiana House to immediately stop the practice of “sectarian prayers” at the opening of the legislative session because the prayers were too Christian. Hamilton argued that praying in the name of Jesus is unconstitutional, but praying to Allah is perfectly fine. And there are so many other radicals that several books have been written about them.

Whatever his personal beliefs may be, President Obama’s policies stand in stark contrast to the vision of the Founders and the acknowledgment of a Creator. That’s the big picture.

And that’s the danger.

The Declaration of Independence is the ringbolt to the chain of your nation’s destiny; so indeed, I regard it. The principles contained in that instrument are saving principles. Stand by those principles, be true to them on all occasions, in all places, against all foes and at whatever cost. — Abolitionist Frederick Douglas (1818-1895).

But that big picture brings with it a great hope for the President — the hope of redemption through the grace and mercy of that Creator that America has called upon since its birth. President Obama can turn his presidency around by approaching his service as Jefferson did. Here are the words from Jefferson’s Inaugural Address (1805):

I shall need, too, the favor of that Being in whose hands we are, who led our forefathers, as Israel of old, from their native land and planted them in a country flowing with all the necessities and comforts of life, who has covered our infancy with His Providence and our riper years with His wisdom and Power, and to whose goodness I ask you to join with me in supplications that He will so enlighten the minds of your servants, guide their councils and prosper their measures, that whatever they do shall result in your good, and shall secure to you the peace, friendship, and approbation of all nations.

So we need our presidents to remember the Creator, not only when quoting the Declaration of Independence, but we need them to remember Him in their whole approach to governing as well.

And perhaps more importantly, we must remember the Creator.

[I]f My people who are called by My name will humble themselves, and pray and seek My face, and turn from their wicked ways, then I will hear from heaven, and will forgive their sin and heal their land. — 2 Chronicles 7:14