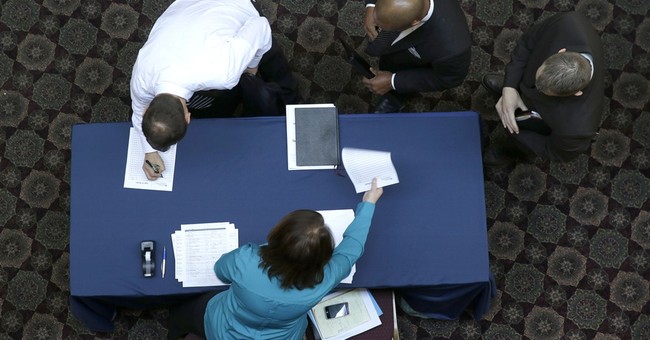 The Bureau of Labor Statistics (BLS) released the employment situation for June last week and the outlook is not as worthy of cheerleading as some on the left would have you believe.

Although the number of jobs created was slightly higher than the recent monthly average, most of those were part-time jobs. In fact, the number of people employed full time actually decreased since last month by over half a million. Over a quarter of the jobs created were in retail and food service, now the fastest growing sector of the economy. Moreover, the labor participation rate remained stagnant at just under 63 percent for the third straight month – its lowest point since the late 1970s.

Opportunities for young people are also lacking, just as many students are looking for summer jobs – work that provides valuable experience and wage growth later in life. Youth unemployment actually increased this month to a whopping 21 percent. Worse, young people are participating in the labor force at much lower rates compared to last year. Last June, over 40 percent of teenagers ages 16-19 were either employed or looking for work. This year, it’s dropped to just a third. The economy is doing so poorly that many young people have given up looking for work entirely – which does not bode well for their future or the future of the economy.

When these unemployed teenagers try to join the workforce full time with no experience, they’ll be competing with the same people who have had to take part time jobs because they were unable to find other work. Unfortunately, this is a growing portion of the population. The number employed part time because their hours were cut or they could not find a full time job is rising, up 275,000 from last month, to 7.5 million. Minimum wage hikes only exacerbate this problem as they disproportionately harm unskilled workers such as teenagers, who currently hold a quarter of all minimum wage jobs. Now is not the time to raise the minimum wage and make it even more difficult for young people to find that first job.

Also concerning is the fact that some minority groups are finding employment increasingly difficult to come by. Latinos, for example, actually saw their unemployment rate rise to 7.8 percent. Blacks too, are having an even harder time finding work – facing an unemployment rate of almost 11 percent—twice the rate of their white counterparts. Sadly, this pattern holds true among the next generation as well. For black teenagers, unemployment is also almost double their white peers, with over a third who are searching for work unable to find it. Income inequality, a stated focus of President Obama’s agenda, is indeed expanding under his administration’s policies.

Another reason to worry about the long term economic health of the country is that the government had some of the largest gains in employment last month. Government employees enjoy the second lowest unemployment rate. However, it is private sector taxpayers who fund the government and its growth. With the economy shrinking, this growth adds an increasing burden onto those creating prosperity in the private sector. The private sector is also generally more efficient and innovative than government, adding to the unseen costs of this lethargic recovery. In short, these government jobs represent economic redistribution, not growth.

Creating more part-time work and fewer opportunities for people seeking mobility is not a recipe for long-term success. Attempts to spin June as a turning point for our sputtering economy amount to little more than putting lipstick on a pig. With the number of people employed full time on the decline, the total percentage of people working down to a level not seen since the age of disco, and the expansion of the government payroll, the burden continues to mount on hardworking American taxpayers.

In order to truly improve our economy, Washington must cut back the growing regulatory and tax burden on businesses and return to free-market principles that create a stable business climate. Only then will people have real economic opportunity and a fighting chance to achieve the American Dream.