The Actor and the Archbishop 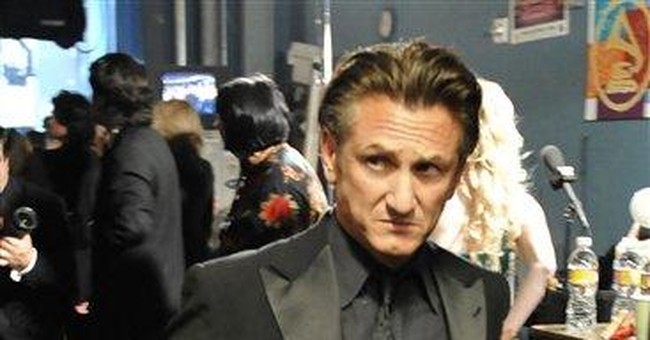 From the hills of Hollywood on Sunday, Sean Penn delivered at the Academy Awards his very own Sermon on the Mount. It was just a few days from Ash Wednesday, the beginning of Lent, but Pastor Penn issued his own stirring call for repentance, for the conversion of hearts:

"I think that it is a good time for those who voted for the ban against gay marriage to sit and reflect and anticipate their great shame and the shame in their grandchildren's eyes if they continue that way of support.

"We've got to have equal rights for everyone," he went on. "I'm very, very proud to live in ... a country who, for all its toughness, creates courageous artists."

Sean Penn calling on us to repent our evil ways and turn to the good -- but who represents the good? "Courageous artists" like himself.

Narrow, intolerant, zealous, self-congratulatory. If that's not pontificating without portfolio what is?

Meanwhile on Monday, 3,000 miles away on the opposite coast, the the next Archbishop of New York, Timothy Dolan, was taking center stage.

I have always felt for Cardinal Edward Egan, Archbishop Dolan's predecessor, because he had an enormously difficult job to do: clean up the financial mess created by beloved Cardinal John O'Connor. No one who lacks the power to print money (note to Obama: maybe not even you) can spend more than they take in for very long. Restructuring of parishes and the closing of some schools was an inevitability. In such times, intelligent, dutiful managerial competence counts for a lot. But it doesn't win you many hearts and minds. Not nearly as many as it should.

At the press conference introducing Archbishop Dolan, the good cardinal inadvertently illustrated this truth. When Archbishop Dolan commented that Cardinal Egan had informed him more school closings were not likely, Cardinal Egan quickly intervened to justify his record: "I told the archbishop all the statistics, and they are great."

The statistics were great. Put that on your epitaph.

Archbishop Dolan, who The New York Times still feels obliged to explain is actually Catholic (aka "hardline" and/or "conservative"), is no shrinking violet. He wrote a beautiful column in 2004 explaining that he was deeply concerned by any politician who promoted abortion, whether Catholic or not, because abortion is a civil rights issue, not a denominational one.

But when asked his strategy for recruiting new seminarians -- the future Catholic priests -- he said simply, "Happiness attracts."

WABC news tried to get a bystander to comment on the Irish archbishops's Spanish (or lack thereof), but the Hispanic New Yorker responded, "I just noticed the smile."

But it's more than the smile -- it's the big, head-thrown-back belly laugh that reassures. Dolan is an archbishop who looks good in a miter and knows it. He stomps around with his bishop's staff like a man who knows that we need larger-than-life heroes who nonetheless care about our everyday lives. In his first statement Archbishop Dolan offers us the opposite of the Sean Penns of this world: "my life, my heart, my soul" -- love without pontifications, without conditions.

But never a love that lowers its standards. Rather, one that raises aspirations above this world.

The actor and the archbishop, unbeknownst to each other, squared off this week -- the first of many contests between these two massive opposing forces in our culture:

One, a self-confident, self-appointed, culture-creating liberalism anointing itself the spokesperson for all that is good about America, and denouncing as evil all that opposes its latest bromides.

And a faith leader who understands how hard it is to actually do good in the world, to believe in good, to have a faith that goes outside the mainstream, the conventional, the self-congratulatory.

Just two days before Lent. Could God Himself have scripted it better?