Loyd Pettegrew
|
Posted: Sep 26, 2021 12:01 AM
Share   Tweet
The opinions expressed by columnists are their own and do not necessarily represent the views of Townhall.com. 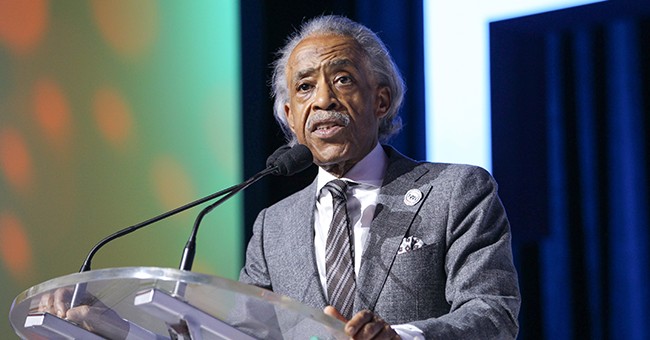 This column is co-authored by Jim McCoy.

It is a sign of our partisan political times that whites can’t address racial issues unless they are progressives hopping on the “racist” bandwagon. They even devote an innumerable amount of time in the fool’s errand of somehow being anti-racist.

Looking back on America’s 2020 summer of hate, stretching to the present time, it has become clear this racial hate was manufactured by a cacophony of progressive factions and interests. Abetting this summer of protests and violence was the ever-present MSM love child, America’s racial instigator-in-chief, Reverend Al Sharpton.

In his eulogy at George Floyd’s funeral Sharpton sermonized, "When I stood at that spot, the reason it got to me is that George Floyd's story has been the story of black folks, because ever since 401 years ago [that would be the date of America’s alleged racist beginning], the reason we could never be who we wanted and dreamed of being is you kept your knee on our neck.” An erudite citizen hearing Sharpton’s eulogy, universally covered by the MSM, might correctly inquire who the “you” and “we” were that Sharpton was referencing. Was he referring to all blacks and all whites? If so, his remarks could not have been more insipid or misleading.

Larry Elder, a very erudite and successful conservative commentator from South-Central Los Angeles, could have easily played the race card after his loss to Gavin Newsome in the recent California recall election. Instead, Elder refused to blame his loss on racism and committed to working for the preservation of conservative principles and California’s betterment. Conversely,  Sydney Kamlager, a black California state senator and Cal State University professor managed some rhetorical profundity that would shame Aristotle saying, “Larry Elder is a Black face on White supremacy.” If Kamlager’s allegation was true, the very idea of white supremacy was proven a misconception for which she experienced no cognitive dissonance since there is considerable evidence refuting such ideas of racism and white supremacy in contemporary society.

Black athletes profoundly overrepresent their race in professional athletics, music, acting and in the academy. For example, the NBA is populated by 74.2% black players and 57.5% black players in the NFL according to Statista. There is a perceived crisis in major league baseball because only 7.8% of its players are black while 31.9% are Hispanic. It is worth recognizing that blacks in the U.S. make up just 12.1% of the overall population so the de regur calls of racism in professional sports while premeditated, is statistically unjustified. Anyone attending recent movies, watching new T.V. shows might reasonably assume that 50% or more of Americans are black; and the fact that some of the highest television viewership is for professional football and basketball—real diversity in both performers and audiences.

Mixed race marriages are also rapidly on the rise in America.  Nearly one-fifth of blacks marry interracially. Pew Research shows that 85% of Americans think a mixed-race marriage is either good or don’t oppose it, hardly the results of a racist America.

Yet President Biden, not missing his usual missed beat, proclaimed “racism” and “Jim Crow laws” over Georgia’s new election integrity law requiring polls to close at 5 p.m. after work. The Washington Post fact-checker gave President Joe Biden a rating of “Four Pinocchios” for his response: “What I’m worried about is how un-American this whole initiative is. It’s sick. It’s sick … deciding that you’re going to end voting at five o’clock when working people are just getting off work.” Does that mean most working people are black? According to the Bureau of Labor Statistics, 58.3 percent of Blacks are in the labor force, 60.7 percent for Whites, 61.6 percent for Asians, 62.9 percent for multi-race and 63.2 percent for Hispanics.

Fred Siegel argues that the decline of New Deal liberalism manifested itself most clearly in a “riot ideology”--“the assumption that the violence of the sixties riots and their criminal aftermath were both justified and, to a considerable extent, functional in rectifying the sins of racism.” The end result is that in 2020, there were about 5,000 more homicides across the country than a year earlier — for a total of roughly 21,500, according to preliminary FBI data…Our nation saw a 30% increase in murders last year, well-above the previous record increase of 12.7 percent in 1968. Last year the U.S. experienced the highest increase in murders since the FBI began tracking national crime statistics in 1960. This gives lie to the claim by leftists that black lives matter.

Heather MacDonald believes that while not having as much rhetorical flourish as racial incriminations, facts do matter. She cites data that in “2019 Bureau of Justice Statistics reveal that 127,350 non-lethal, violent black-on-white crime while 17,690 such crimes were committed by whites against blacks. In other words, blacks commit 88 percent of all interracial crimes between blacks and whites.” MacDonald also gives lie to the Black Lives Matter and progressive claim that police violence is at heart, racist. Crime statistics reveal that in 2021 only four black victims were killed by police officers nationally which is .0000085% of blacks in the U.S. The real culprit of blacks being killed in America is not the police but other blacks. She sums up how American progressives treat racism, “Elite ‘antiracists’ absolve blacks from responsibility for their actions. All crime is the result of racism, if it is even acknowledged. This patronizing attitude is today’s real racism.”

In all reality when liberals and progressives cry out “racist” they are more likely to be looking into a mirror, seeing their own reflection.