The Rebirth of McCarthyism in Trump’s Impeachment Trial

Loyd Pettegrew
|
Posted: Feb 13, 2020 12:01 AM
Share   Tweet
The opinions expressed by columnists are their own and do not necessarily represent the views of Townhall.com. 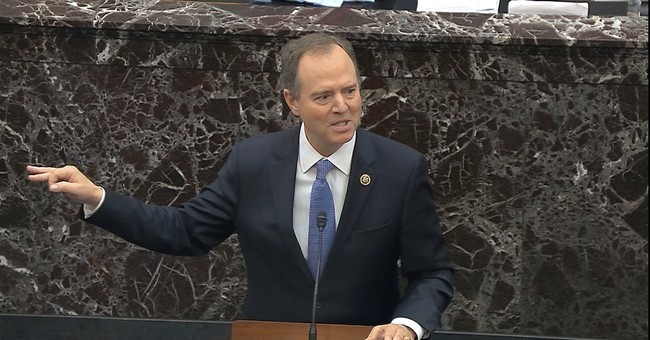 Editor's Note: This piece was coauthored by Jim McCoy.

On Friday, January 31st, the US Senate voted 51 to 49 against calling additional witnesses to testify in the Trump Impeachment Trial. This vote dealt a devastating blow to the House managers' impeachment efforts. Schiff and the House managers had counted on the Senate and the mainstream media to do their work by establishing a solid case against President Trump. Essentially, the Senate vote underscored the fact that it would act as an open-minded jury, not the prosecution.

As could be expected, Democrats were quick to condemn the vote that took place almost entirely along party lines. Adam Schiff (D-Calif.) one of the House impeachment managers exclaimed in a news conference after the vote, "If a judge or president believes that it is to his or her advantage that there shall be a trial with no witnesses, they will cite the case of Donald Trump." He went on to warn that there was now a dangerous precedent established for adjudicating the guilt or innocence of a party "without hearing from a single witness, and without reviewing a single document."

Schiff's analysis of the ramifications of the Senate vote on jurisprudence in the United States might have been more convincing had he had not so blatantly disregarded established legal principles in publishing the articles of Trump’s impeachment. The jaundiced Democratic impeachment plan had clearly failed.

On September 24, 2019, Nancy Pelosi announced that the House was forming committees to begin a formal impeachment process of President Trump. The purpose of this inquiry was not to determine if wrongs had been committed by President Trump, but rather to construct a narrative that wrongs had been committed by Trump and these committees set out to do their best achieve this. This difference in approach would deny Trump customary "due process" prerogatives.

As President Trump’s defense attorneys repeatedly pointed out, the process that the House used in creating the Articles of Impeachment was fundamentally flawed primarily but not exclusively because Trump’s side was not allowed the customary jurisprudential right of cross examination.

This flawed impeachment inquiry also failed to begin with a full house vote--a historical precedent. Democrats set the rules in the ad hoc committees—announcing it would be conducted privately in Capitol basement bunkers. Republicans were prevented from subpoenaing witnesses, having legal representation for the president, nor were transcripts published or released to the public--all Constitutionally guaranteed due processes.

Lloyd Billingsley recently penned an article, “The New McCarthyism Has No Sense of Decency.” The article is certainly prescient in linking the Trump Impeachment circus to McCarthyism. What is critically important to add is the oversized role the media played in both travesties.

Americans were introduced to McCarthyism in 1950, a time when television news was in its infancy.  Joseph McCarthy, a Republican senator from Wisconsin, held a press conference stating that he had information that there were over 400 Communist members in the U.S. State Department. For four years he adeptly manipulated the print, radio and the burgeoning television media, unfolding stories about an ongoing communist conspiracy in America and smearing any opponents as “communist sympathizers” to keep his own name in the headlines. By April 1954, McCarthy had become chairman of the Government Operations Committee in the Senate, opening televised hearings into communist charges against the U.S. Army.

This eventually would prove to be his downfall as his behavior was seen by observers and the American people as overtly biased and despicable. His style was one of continually trying to manipulate every step of legal proceedings to assure his desired outcomes. Hearsay and rumor carried the weight of ironclad testimony. Fear-mongering was an especially effective tool for political and public persuasion.

Wes Vernon argues in “AIM-The Ultimate Vindication of Joseph McCarthy” that unscrupulous government officials, and particularly the burgeoning mass media, played an oversized role in selling falsely McCarthy and his story to the public. To underscore the how actively some media bosses  participate in the leftist cancel culture, David Greenfield details how reporter Ken Evseroff was summarily fired at WPIX television for daring to criticize Representative Ilhan Omar, a Muslim woman, accusing him of Islamophobia.

Trump’s Impeachment Trial revives many of the methods commonly associated with the McCarthy hearings. Democrats Representative Adam Schiff and Jerry Nadler and the MSM network are now the perpetrators and President Trump the doppleganger of Senator McCarthy. Together they have held the world hostage with the impeachment hearings, preventing the legislative body from doing any non-partisan, legislating which is their actual job.

The basis of the Democrat charade is not what is laid out in Section 4 of Article Two of our Constitution —“treason, bribery, or other high crimes and misdemeanors”. Rather it is a purely ideological dislike for President Trump and his nerve for running for and winning the presidency. Their contempt and antagonism for Trump has been so intense that it has created a new McCarthy-type groupthink among the democrats and their MSM abettors. Politically contrived and controlled legal proceedings have no place in the American legal system and may spell a return to McCarthyism.