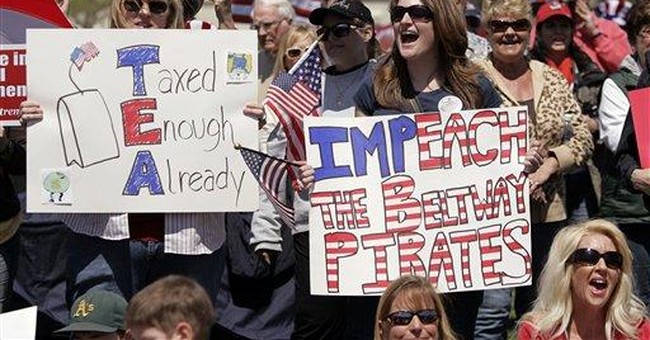 The Tax Day Tea Parties inspired and energized conservatives across the country last week, but the response to the events from the media and Democrat partisans was perhaps the most interesting thing to watch.

When people turned out all over the country in the thousands to attend tea parties, Obama followers, especially those in the media, were shocked and bewildered, and it showed. The obvious explanation -- that many average, everyday Americans were not thrilled with the "change" they were getting from the new administration -- was not something those in the media or Obama supporters were willing to accept.

Instead we heard about how the estimated 500,000 or more people attending the 800 or so tea parties did not attend of their own free will as grass roots activists. One explanation from critics was that the protests were from "fake" grassroots. We were to believe those people didn't take time off from work and show up in the rain on their own. No. Fox News did it all. Fox somehow has enough control over those people to cause them, against their otherwise free will, to go to the trouble to interrupt their normal activities, make signs, pack up the kids and their diaper bags and strollers, travel to their nearest tea party site, find a parking space, walk to the protest area and raise their signs and their voices.

Most reporters evidently had trouble reading the signs being held up at the protests because they told their viewers the focus of the tea parties was on paying taxes. Some of the reporters even went so far as to point out to protesters that they should not be unhappy with their taxes because the new president was giving them tax cuts. If they had read the signs, they would have known that was not the point of the protests.

There were some protesters complaining that Obama nominees had evaded taxes, while average citizens paid theirs, but the focus was not so much on the amount of taxes paid, but rather how they were being spent in a reckless, foolish fashion and at an unprecedented rate, tripling the deficit with thousands of earmarks and tons of pork. Tea party protesters held signs railing against politicians who signed onto a huge spending bill they didn't bother to read and that they rushed to be voted on before anyone else had time to read it either. They also complained that the enormous debt being passed on to their children and grandchildren would result in an oppressive tax burden future generations would be forced to manage.

Tea party protesters also complained about the government taking over private enterprise -- determining the salaries of privately employed individuals, demanding resignations from US executives and even getting into the business of guaranteeing automobile warranties.

All those in the media had to do was read a few of the signs to "get it." The complaints were pretty straight forward: Stop the spending. Get out of our business. Let us keep more of the money we make. Stop the bailouts. For some reason such common sense concerns were beyond the comprehension of most of those reporting on the events.

In addition to reporters of the tea party story claiming the events were not grass roots because they were organized by Fox News, and most of the reporters not correctly reporting the subject of the protests, a few television journalists and pseudo-journalists, felt the need to disparage the protesters with nasty jokes about "teabagging," a reference to a slang term for a particular sex act.

Since so many in the media missed the point of the tea party protests, or intentionally misled their viewers and readers about them, or (like the New York Times) tried to pretend they didn't take place, I'll explain what they meant and what we should have learned from them.

The tea party protests showed that there are many people across the country (in all 50 states) that are not satisfied with the kind of "change" the election of the Obama administration brought them. We learned that liberals only believe exercising freedom of speech and questioning the government is patriotic when it is done to protest a Republican president.

We learned that when liberal unions bus people to protests and when some liberal groups even pay people to protest, the media does not deem that influence worth reporting. But if a cable news channel decides to cover (and promotes that they will cover) a protest with hundreds of thousands of participants taking place in all 50 states that should be reported as evidence the people were not protesting of their own accord.

We learned that followers of the new administration, including those in the media, do not know what to think of the tea parties, but they understand enough to know they are something for liberals to fear. In their so-called reporting of the events the media provided irrefutable evidence of extreme bias. If there is any doubt, all one has to do is look at how the coverage of the tea party protests compares to coverage of Cindy Sheehan and the Code Pink anti-war protests.

Maybe conservative protesters learned they should have engaged in violence, made a big mess and showered less. That formula seems to draw great media coverage for liberal protests. Or maybe they learned to just keep plugging away and that eventually word will get out, as it is now, slowly but surely. Fox News is not only the number one cable channel, but it recently drew bigger numbers than its competitors, CNN, MSNBC, CNBC and Headline News combined. The New York Times and many of the other major daily newspapers that gave the protests little or no coverage, are suffering and may not survive much longer in their current forms.

The news organizations and individual reporters who worked hardest to ignore or disparage the tea party protesters might be in for a harsh backlash. Instead of discouraging the protesters, the shabby treatment only confirmed what they already knew about media bias and in the process the liberal media showed that bias clearly enough for even those who pay just passing attention to politics to see. I suspect it also made most of the protesters even more determined to spread their message by any means available to them.

If the Tea Party Movement continues to grow beyond the recent protests, expect more confusion from those attempting to report it. Except for some pro-life protests, I don't recall any time conservatives have felt a need to take their grievances "to the street" on such a wide scale. This one might take quite a bit longer for those in the media to understand.