Lindsey Stroud
|
Posted: Jul 01, 2019 1:44 PM
Share   Tweet
The opinions expressed by columnists are their own and do not necessarily represent the views of Townhall.com. 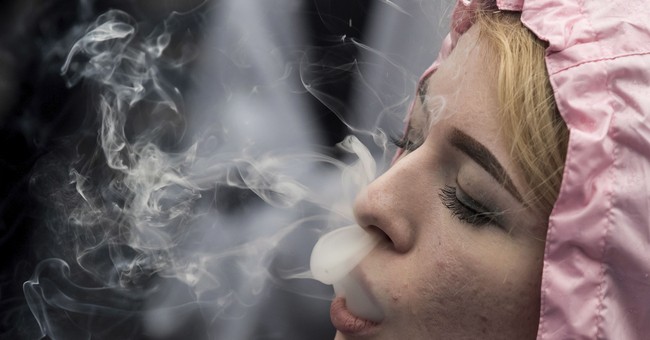 Under the MSA, participating tobacco companies are bound to pay the suing states, in perpetuity, a portion of the revenue collected from tobacco sales. And though many public health advocates believed this to be a major win, the real losers of the MSA were smokers, who are essentially paying the annual payments to the states through “user fees.”

San Francisco is raking in MSA funding. From 2017 to 2018, MSA payments to The Bay City increased by 19 percent from $9.173 million to $10.952 million. In 2002, San Francisco was one of three California cities (including Los Angeles and San Diego) slated to receive “approximately half” of the estimated $21 billion in MSA funds earmarked for the Golden State over a 25-year period, according to the California Legislative Analyst’s Office.

Unfortunately for big tobacco and localities across the land, e-cigarettes have totally disrupted the status quo. Since their introduction to the U.S. market in 2007, an estimated three million American adults have used these products to quit smoking. Indeed, e-cigarettes have been “twice as effective” as nicotine replacement therapy in helping smokers quit.

Moreover, despite fearmongering campaigns against e-cigarettes, these products are significantly less harmful than combustible cigarettes. Numerous public health groups including Public Health England, the Royal College of Physicians, and the National Academies of Sciences, Engineering and Medicine note e-cigarettes are less dangerous than combustible cigarettes. In June 2019, the American Cancer Society stated existing research “has found that e-cigarette use is likely to be significantly less harmful for adults than smoking regular cigarettes.”

It is alarming that San Fran, which prided itself in 1996 on being the first locality to fight big tobacco, would shutter an industry that is helping remedy the effects of combustible cigarettes. In 1996, then-San Francisco City Attorney Louise Renne told the Los Angeles Times that “[c]ounties in particular cannot afford their scarce public funds drained by having to pay for the treatment of tobacco-related illnesses.”

Even more alarming, San Francisco officials are restricting adult access to tobacco harm reduction products in an effort to save the precious MSA dollars that are borne by the lungs of smokers who would most benefit from e-cigarettes being widely available.

In May, Mayor London unveiled a budget that includes “more than $1 billion in additional spending,” for the next fiscal year. It is overwhelmingly apparent public officials in San Francisco do not care about public health, they care about tobacco dollars.