The LA Weekly’s Review of Trainwreck is the Real Trainwreck 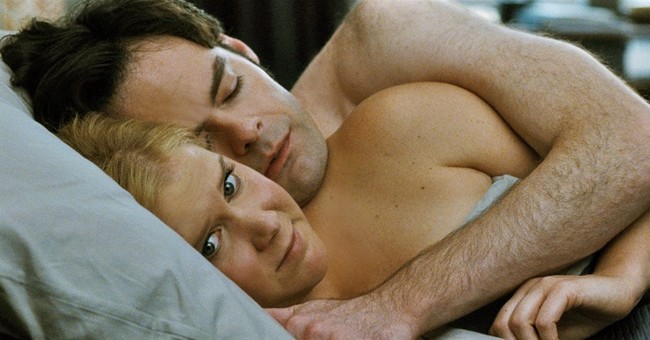 Politics is downstream from culture. Until we reclaim the culture, it will be difficult to reclaim political power.

Nowhere is this more evident than in the LA Weekly’s review of “Trainwreck.” It may shock readers to know that this is not only a very funny movie, but espouses Conservative values. The LA Weekly review, however, asks “Trainwreck has laughs, but at what cost?” One would expect that the review would tackle any harmful, unethical or immoral themes in the film.

It does, but in classic Liberal Bizarro-World fashion, it reverses which values are harmful.

(Some mild spoilers follow, although if you’ve ever seen a Judd Apatow movie, they are hardly spoilers.)

The movie revolves around Amy (Amy Schumer), a woman who literally sleeps around New York. The film’s opening scene delivers the film’s counter-message: at age 9, Amy’s father tells her “monogamy isn’t realistic,” and that he’s getting divorced. Amy grows up determined to avoid intimacy and monogamy. She sleeps with multiple partners, engaging in joyless sex, and never stays the night. She also drinks too much, and often wakes up with no idea where she is or how she got there; gets high on a regular basis; and doesn’t value her own contributions at the magazine she works at. Only when she meets Dr. Aaron Conners (Bill Hader) does she fall in love, realizes her actions affect others, finds confidence in her work, and quits her promiscuous and hedonistic lifestyle.

The moral of this story is clear: people are going to feel better about themselves by being in a committed and monogamous relationship than they will if they sleep around.

Not only is the moral factually-based, as there are mountains of academic studies to support it, but it’s a far more satisfying conclusion for the audience. It’s also good storytelling. Characters who change over the course of a story are far more interesting and likeable than those who don’t.

The LA Weekly review is disappointing, if not surprising. Film reviews have generally been the paper’s strong point, with a pedigree that includes Manhola Dargis and A.O. Scott. Alas, Stephanie Zacharek’s review offers up a core misguided notion of Liberalism.

She points to Amy’s behavior as being problematic because, “Amy tackles her sex life with grim determination, and her lack of engagement -- emotional or sexual -- exposes a sneaky and unpleasant thread of conservatism: the movie wants us to buy the idea that sex really is best with your One True Love, and anything outside of that is just a cheap substitute."

So we are to infer that a lifetime of sleeping around is actually best for people in general? For women? That "true feminism" means a woman must sleep with multiple partners, have no remorse over it, and feel great about it? That sex really is best with multiple partners and that having a One True Love is the cheap substitute?

This contradicts human evolution, and if you will, “the way of things.” Zacharek even admits, while ironically missing her own point, that Amy “is at times so badly behaved – toward a man she supposedly loves – that it’s hard to be on her side.” Exactly! It is hard to be on her side, because she disrespects herself, and therefore the audience, which is supposed to identify with her.

I’ll tell you what a “true feminist” movie would have been, and had Zacharek stuck only to this point, she’d be on to something.

A true feminist movie is about one thing: a woman making her own choices, and living life as she sees fit. That may mean being Christian, a stay-at-home mother, and raising three kids.

Alternatively, Apatow and Schumer could have made a more daring film in which a woman can be in complete control of her own choices, enjoy lots of sex, and simply select a promiscuous lifestyle. The film could show how that woman could still be happy and content. It would be the exception rather than the rule. However, it would be a perfectly valid story, finding merit with both Liberal and Libertarian audiences, for life is about the choices we make, free from government or societal interference, that make us content.

Such a movie can not only exist, it can exist without insulting Conservative values. Indeed, it is Manhola Dargis in her own review, who says, “Ms. Schumer is at her strongest when she insists that women aren’t distressed damsels but — as they toddle, walk and race in the highest of heels, the tightest of skirts, the sexiest, mightiest of poses — the absolute agents of their lives and desires.”

Zacharek starts down this path, but then needlessly bashes Conservative values – the values of many Americans who no longer go to the movies for the reasons I’ve just written about.