What Hollywood Could Learn From "Downton Abbey"

Laura Hollis
|
Posted: Jan 21, 2016 12:01 AM
Share   Tweet
The opinions expressed by columnists are their own and do not necessarily represent the views of Townhall.com. 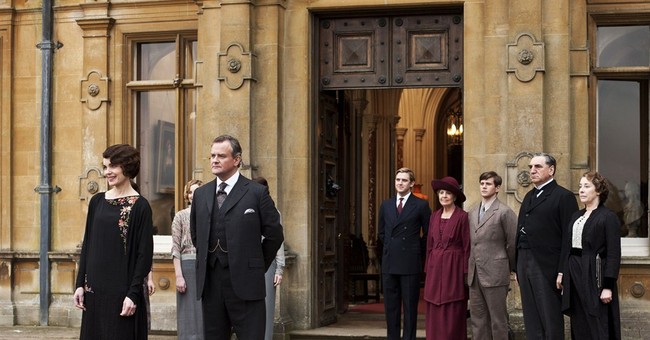 It's January, and that means it's "Downton Abbey" season here in the States. The British television series has been an unprecedented success. A quick Wikipedia search reveals the dozens of awards that the series has been nominated for, and won (Golden Globes, Primetime Emmys, BAFTAs and Screen Actors Guild, among many others), and the numerous viewing records it has set and shattered.

One of the great surprises to Julian Fellowes, the show's creator, is its extraordinary popularity in the United States, which has only increased with each season. "Downton Abbey" follows few if any of the usual formulae for success in the U.S. market. As American "Downton Abbey" fans revel in the sixth and final season, it's worth asking why this show has drawn such an enormous fan base in its five-year run.

Here are some thoughts:

The writing is excellent. The story arcs are well-developed, the dialogue is interesting and complex -- not insipid and absurdly obvious. And there is plenty of humor.

--It doesn't pander to the audience. There is plenty of sin and salacious behavior, but much of it takes place off-screen. Indeed, many of the most significant character confrontations take place off-screen -- something American writers would be loath to do. The American rule is "show everything." "Downton Abbey" leaves plenty to the viewers' imaginations, and is none the worse for it.

--The characters are interesting and multidimensional. America's screenwriters can rarely resist moralizing or reinforcing stereotypes: rich people bad, poor people good. This is tedious and unimaginative. Even though Fellowes and his team deliberately chose a period of time that is noteworthy for the dramatic societal changes taking place in England and elsewhere, they avoided that kind of oversimplification for the most part. Some members of the wealthy class are legitimately shallow and self-absorbed. Others are kind, open-minded, and generous. Some from the servant class are patient and long-suffering. Others are conniving (think of Thomas, the underbutler, or Cora Crawley's lady's maid, Miss O'Brien) or overbearing boors with bad manners (Miss Bunting). Even so, all of the characters possess good qualities and flaws, and this is why we are drawn to them. Furthermore, we watch as characters develop, and relationships change. This is the way things are in real life.

--All age groups have compelling storylines. I cannot emphasize this enough. In the United States, unless a show takes place in a nursing home, the vast majority of the characters have to be young and nubile. Older characters of substances are few and far between, as many a Hollywood actress will tell you. And even then, it is fully expected that an older actress will have had the correct amount of plastic surgery, Botox, and fillers, along with personal trainers and dietitians, in order to get a role. A distressing amount of entertainment content in the United States seems to be produced under the assumption that nothing interesting happens to you after you turn 25, and the "best years of your life" are those between age 12 and 18. By contrast, in Downton Abbey, one of the very best characters is the Dowager Countess, played by Dame Maggie Smith, an actress in her 80s. Viewers care about the love story between Mr. Carson and Mrs. Hughes -- both older characters, as well as Mrs. Patmore, the cook, Mr. Mason, the farmer, and many others. Their stores are interesting. They matter. They are not just backdrops for teen drama.

--Everyone isn't cookie-cutter beautiful. The Brits have long had us beat on this score in virtually every category of visual entertainment. Film and television producers in England are willing to cast older actors -- actors who are not traditionally beautiful, actors with strong accents, actors who come from different countries. Downton Abbey is no exception. While some of the characters in the series are played by actors who have stunning looks, many are not --- and they are no less adored by the viewing public.

--Marriage isn't denigrated. By no means is every marriage in Downton Abbey happy. In fact, many of the Dowager Countess' pithy witticisms are derived from the fact of unhappy marriages among the nobility. But marriage and family are celebrated in Downton Abbey as beneficial and stabilizing forces. If you watch TV in the States, it would be easy to draw the conclusion that everyone sleeps around, few people marry, those who do are unhappy, and most marriages end in divorce. It is unusual for a happily married couple to be portrayed in American film or television as main characters. (Part of this is, of course, Hollywood's weird fixation with teenagers as the most interesting people on the planet.)