Time for Christians to Abandon "Progressivism," Part I 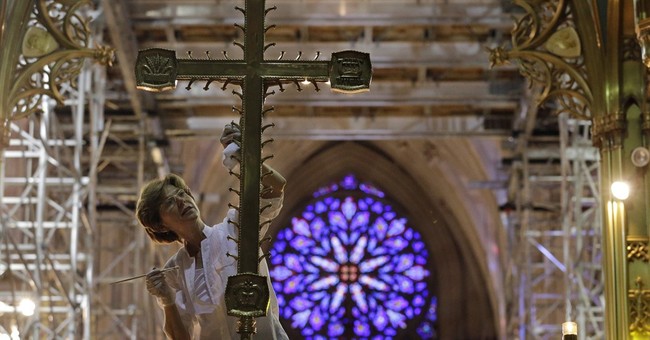 Trending
For many Christians -- and for some Catholics in particular -- self-identification as politically "progressive" is as much a part of their identities as religious affiliation itself. Indeed, there are a good many Christians who seem to consider progressivism to be the only political perspective that is truly consistent with a Christian worldview.

With the release of the 10th and latest Planned Parenthood video, surely we should, at this point, be able to call that conclusion into question.

Over the past few weeks, we have watched video after video of Planned Parenthood operatives displaying a shocking disregard for the humanity of the tiny people it is killing, dismembering and selling. We have seen them callously describe certain abortion procedures as "less crunchy," as they "crush above" and "crush below" to preserve the most sought-after human tissue; joke about shipping severed heads; cut open the face of an aborted baby boy whose heart is still beating, and proclaim gleefully about the variety and quality of specimens.

This week's worst Planned Parenthood quote: "Oh, my God! Gonads! Everything we provide is fresh."

There are very uncomfortable silences in conversations with Christian progressives about what the Planned Parenthood videos reveal. The astonishing lack of attention that the media has given the videos betrays a profound discomfort as well. It is not merely that the videos reveal the seamy underside of abortion. It is that they reveal the true nature of progressivism.

For all the talk about "higher taxes" and "income inequality" and "a preferential option for the poor," progressivism is really just another strain of the fatal and failed collectivist impulses not to improve human society (yes, a worthy objective), but to perfect it. Once these delusions seize the fevered imaginations of their advocates, the individual loses his or her inherent value, and becomes just a cog in a wheel -- valuable only to the extent that he or she advances the cause (or is the convenient embodiment of a slogan: the "little guy," "the proletariat," "the 99 percent"), expendable otherwise. In the most extreme cases, the individual is not merely expendable, but detrimental -- and thus fair game for destruction -- if he or she actually stands in the way of progressives' utopic societal designs. There is a reason that collectivist societies produce so much imprisonment, privation and death.

Progressivism has an ugly relationship with eugenics. Thus it should be no surprise that Planned Parenthood's founder, Margaret Sanger, was a progressive. As innumerable quotes from Sanger reveal, abortion was intended as a tool to rid civilization of what she called "human weeds" -- the poor, blacks and other minorities, and the infirm or ill.

Nor is this some vestige of benighted early 20th century thought. In 2001, authors John J. Donohue III and Steven Levitt published a widely cited (and oft-criticized) work of scholarship in which they argued that legalized abortion reduced crime. In a 2009 interview with Emily Bazelon in The New York Times Magazine, U.S. Supreme Court Justice Ruth Bader Ginsburg was quoted as saying:

"Yes, the ruling about that surprised me (Harris v. McRae, 1980, in which the court upheld the Hyde Amendment, which forbids the use of Medicaid for abortions). Frankly I had thought that at the time Roe was decided, there was concern about population growth and particularly growth in populations that we don't want to have too many of."

I read that interview. I was stunned. And I was not alone. And yet, although conservative writers jumped on it, the so-called "mainstream" media's silence after Ginsburg's remark was deafening. It took another three years before Bazelon could produce a new interview in which Justice Ginsburg was rehabilitated by "clarifying" what she had meant three years earlier.

To the extent that Planned Parenthood was created to eliminate the populations Margaret Sanger did not want to have too many of, it has been sadly successful. Nearly 80 percent of Planned Parenthood's surgical centers are within walking distance of black or Hispanic/Latino neighborhoods. Blacks are 12 percent of the U.S. population, but black women have 35 percent of abortions nationally. The New York Department of Health released data in 2012 revealing that more black babies had been aborted than were born in New York City that year.

This year, we now have not one, not two, but 10 separate and distinct interviews with multiple Planned Parenthood personnel (and companies that contract with Planned Parenthood) in which they manifest an appalling disregard for the value of human life. (This is without mentioning a significant number of earlier videos in which PP personnel are shown to have overlooked allegations of sex trafficking, refused to report instances of statutory rape, and coached clients on how to avoid compliance with other laws.)

After each instance, Planned Parenthood scrambles to defend its "services" to women, attacks its challengers, and/or insists that what was captured on film was "inaccurate" or "uncharacteristic" or a deviation from official procedures. How many times do we have to see this before there is a national admission that this is no outlier? The Planned Parenthood videos do not show us an exception to progressivism's objectives, they show us the goal -- and the means for achieving it.

Planned Parenthood's practices are indefensible. And it is Mengelian to argue -- as they do -- that the sale of aborted baby parts is OK, because it's supposedly for science and the betterment of humanity.

It is also, however, completely consistent with progressivism's MO: Your death is OK, as long as other people's lives are improved by it.