Scott Brown and the Return of the Reagan Democrats 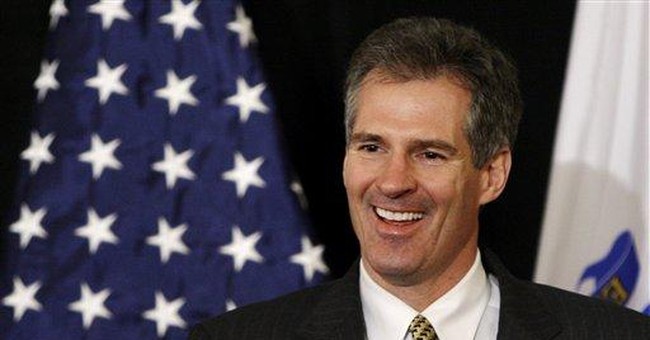 The election of Scott Brown on January 19th is truly a remarkable moment in American politics. But unlike some, I was not surprised. Too many political pundits seem not to understand Americans. (And yes, even Massachusetts voters are Americans.) Scott Brown’s election was remarkable because it should be a wake-up call not only to President Obama and the Democrats in Congress, but all the writers and pundits who seem to have lost sight of how Americans feel about themselves and their country.

Brown’s election is the first time that many Massachusetts Democrats voted for a Republican since Ronald Reagan ran for President. And this tells us plenty. Reagan appealed to Americans of all political stripes (except the media and academia, of course) because he understood how Americans think. Reagan loved America. He enjoyed meeting his countrymen. He had an indelibly positive attitude about life, and about politics, because at his core, he believed in the principles that make America distinctive, powerful and prosperous – which is to say free - even while understanding that American isn’t perfect. It was easy for Reagan to be affable, humorous and grounded in public and in private, because he legitimately felt that way. Leftists and the media (but I repeat myself) characterized him as a dolt, because they confuse negativity with gravitas, and panic with power. And Leftists love to campaign and govern on negativity and panic.

The best elected leaders – like Reagan - campaign on a platform of positive principles, and voters flock to them in droves. But when there is no one who proclaims the greatness of America, and the unlimited resourcefulness, creativity, resilience, generosity and ingenuity of Americans – especially in the face of great economic or social challenges -- then yes, voters can and will gravitate to the naysayers, the complainers, and the woe-is-you career politicians who build their empires on the backs of the poor and the ignorant, and whose policies keep those same people poor and ignorant.

President Obama and the liberals in Congress are all of this ilk, and they got spanked in Massachusetts, not only by Republican and conservative voters, but by the fabled “Reagan Democrats:” independents and lightly left-leaning Democrat voters who are live-and-let-live on social issues, and tolerant of reasonable taxation for effective programs run by an accountable government, but firm on national defense and prudent fiscally. These voters have been betrayed by Obama and congressional Democrats who have been on a spending orgy domestically, and an “apologize for America” tour abroad. Americans – Republicans, Independents, Libertarians and Democrats alike – have seen themselves and their country mocked, belittled and mistreated by their elected officials. And they are fed up.

Obama is the worst of the bunch. And in a “bunch” that includes Nancy Pelosi, Harry Reid and Barney Frank, that is saying something. The standard line is that Obama ran as a “centrist,” and a “populist.” He is neither, and I for one am bored with this tired trope. Those who say it must not have listened to a thing he said or read anything about those from whom he took his inspiration. His condescending remarks about pick-up trucks just two days before the Massachusetts election are right up there with his “bitter clingers” crack during the presidential campaign, or his “acting stupidly” slur about Cambridge police officers. And these are not just “slips,” “gaffes” or “tin-eared;” they are true reflections of Obama’s ingrained liberal elitism and his utter disdain for the American working class. But then, Obama doesn’t have much good to say about upper-class Americans, either.

Reagan inspired all Americans to see their commonality with each other. Obama prefers to divide and conquer, and his shtick is to mock some other group while he is talking to you. This rhetorical sleight-of-hand is a classic political con game: While he fans your ire about confiscating bonuses from undeserving “Wall Street tycoons” and “fat cat bankers,” he and his cronies are busy stealing from you.

Contrary to what the pundits proclaim, Americans do see it. They made that clear in the April tea parties. They made it clearer in the August town halls. And then they watched in while they and their countrymen were mocked as extremists, belittled as angry nincompoops, humiliated with vulgar sexual slurs and worse – ignored – by the very politicians they elected to represent them.

So now Americans are speaking where they are always best heard – at the voting booth.

Will those in power finally “get it?” I’m not so sure. Those who buy into the “Obama ran as a centrist” line are now predicting that – after conservative victories in Virginia and New Jersey last year, a close shave in New York 23, and a resounding defeat for Obamanomics, Obamantanamo and Obamacare in Massachusetts – our wily and deft (in their eyes) President will “move to the center” as Clinton did.

They don’t understand Obama, and I predict that they are wrong. Clinton was a politician; Obama is an ideologue. Clinton was willing to compromise to remain politically viable. Obama – as amply demonstrated by those in his inner sanctum like David Axelrod and Rahm Emanuel - will be willing to manipulate the rules to obtain his ends. Obama has signaled this all along, loud and clear. His background as a “community organizer” is built on an ends-justify-the-means philosophy whose founder, Saul Alinsky, was quite explicit about the need and justification for doing whatever it takes, including deceit, to get what you want done.

Americans have made quite clear that they do not want Obama’s “remade” America, and that candidates who run on a platform of concern for and appreciation of Americans’ judgment, fiscal prudence, strong national security and government accountability can win.

One of the most common complaints in conservative circles for years has been, “we don’t have a Reagan anymore.” That’s an excuse. The principles matter as much as the person. We don’t have Reagan, but we have a Hoffman, a McDonnell, a Christie, a Rubio, a Palin, and now, a Brown. And who knows who else out here in Unlikely Candidate Land will take courage from conservatives’ recent victories? I’ll go out on a limb and say that it would not only be possible for a true conservative to win, but win big, even here in Obama’s home state of Illinois. And wouldn’t that send a message?

Republican leadership, take note: You don’t have to be Reagan. You just have to be right.