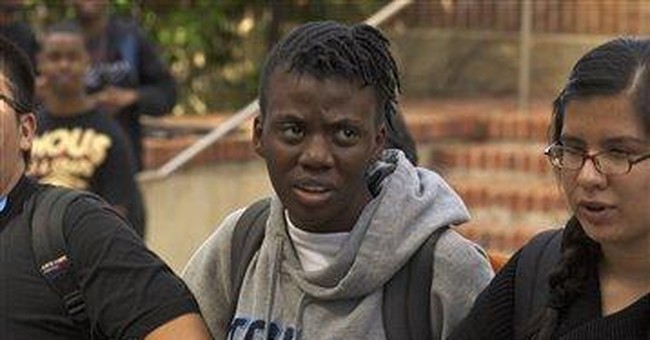 In the late 1960s, college students rioted and stormed administration buildings, protesting everything from the Vietnam War to freedom of speech violations to the paucity of black students, faculty and programs on campuses. If you were around then and thought some, most or all of those protests were over-the-top, you might want to add the brouhaha at the University of California at San Diego to the list.

Last month, a black comedian calling himself Jiggaboo Jones organized a party for his fans in the area, dubbed "Compton Cookout" (toned down from "Nigga Nite"). Attendees, who included students from UCSD, were encouraged to wear "ghetto" attire, short nappy hair, gold teeth and speak loudly in substandard English. On the menu: chicken, watermelon, Kool-Aid and malt liquor. Sources erroneously reported that the off-campus party was organized by UCSD's Pi Kappa Alpha, a white fraternity.

Members of the Black Student Union heard about the party, raised a ruckus and condemned the "racist" frat for supposedly mocking Black History Month with embarrassing racial stereotypes. The school's humor publication in turn mocked the protestors and pointed out that UCSD's Black Alumni Association scheduled a "Kool Aid 'n' Chicken" dinner the same month (since removed from the site). The student publication also used a racial slur on a student-run TV program. Consequently, UCSD and the student government shut down the TV station and froze funding for 33 student media organizations. (FIRE is on the case.)

Afterward, someone left a noose in the campus library, and black students stormed and occupied the chancellor's office. Some claimed (with straight faces, apparently) they felt unsafe and intimidated on campus. A campus police report listed the noose-hanging as a hate crime. The person who left the noose later came forward and issued an apology, published in the student newspaper. She described herself as a "minority student" who sympathized with the protestors, but claimed to have left the noose behind unintentionally. Neither her name nor her race has been released. After the noose incident, someone discovered a "KKK-style" pillowcase on a campus statue. So far, no "minority student" has come forward to take the blame for it.

Based on race-fueled hysteria, fake-hating and apparently long-festering racial grievances, the Black Student Union issued a list of "demands" to administrators. The students seized the opportunity to ask a state-supported school to revert to race-based admitting, hiring and funding. And the school capitulated. Yeah, that'll ease racial tensions.

But there's a problem. Government race-based admitting and hiring is illegal in California. In 1996, 54 percent of voters barred their government from discriminating against and preferring individuals or groups on the basis of race and sex.

Ward Connerly, former UC regent and president of the American Civil Rights Institute, spearheaded the campaign to ban racial preferences and intends to review the agreement between the students and the school to determine whether it violates the law.

"It's disturbing that the administrators would be such cowards about all this, rather than standing their ground and saying that in the fullness of time, we will review this situation, but we're not going to do it with a gun to our head," Connerly said.

Why did UCSD administrators give in to race-based demands that may violate the law? "The administration of the university and the regents were under great, great pressure because of the 32 percent increase in the fees that they passed several months ago," Connerly said. "They have been the subject of a lot of very intense pressure from students, from faculty, from administrators, from a lot of people, and there would be no better time for them to get a race issue that would redirect attention from their action to raise fees. This is very fortuitous for them."

Fortuitous, indeed. Behold, racism in the 21st century: a stupid party organized by a black man, a noose left in the library by a "minority student," and a silly KKK-style hood placed on a statue by an idiot.

Eat your heart out, Bull Connor.