Larry Provost
|
Posted: Feb 28, 2018 12:01 AM
Share   Tweet
The opinions expressed by columnists are their own and do not necessarily represent the views of Townhall.com. 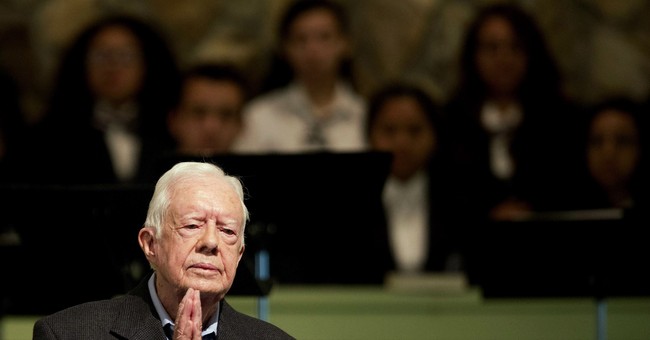 One of the many reasons Liberty University is known as the world’s most exciting university is that very often one never knows what is going to happen next.  It has also earned that title by continually setting new standards in American higher education.

Such as it was with the recent announcement that Jimmy Carter would be the speaker at this years’ Liberty University commencement.

Carter, in many ways, has a strong link with Liberty.  Many evangelical Christians voted for Carter in 1976.  The memory of Watergate was fresh and the desire for an honest man in the White House was strong.  Carter represented those values and was the first major presidential nominee to talk of his born-again faith in Jesus Christ.

However, as many evangelicals voted for Carter in 1976, even more voted for Reagan in 1980. Reagan visited then Liberty Baptist College not long before the election.  After 1980 many thought Carter was consigned to history.  Yet, he set new standards as an ex-president. President or ex-president, many have strong feelings about Carter.

But few doubt Carter’s personal commitment to Christ and being firmly committed to Jesus’ commands to help the poor and attempting to make peace.  Whether one disagrees with Carter’s policies, it is his faith derived from the Bible that he and his wife read every night, in English and Spanish, that drives him.  (It is also worth noting that Carter’s party shuns him on the abortion issue).

Praise for the Carter invitation has been nearly universal among the Liberty community, even amongst the first students who graduated from Liberty in the 1970s.

This praise shows the larger point of the Carter invitation; namely the tolerance that exists at Liberty, as opposed to other campuses.  How often do other public or private colleges invite conservatives to be their commencement speaker or speak at all?  Very few and the conservatives that are invited are usually invited by student groups and almost never by the administration.

Those few conservative speakers at other universities are forced to be guarded from the intolerant leftists who interrupt their speeches and throw things at the speakers, all while declaring their need for safe spaces.  This does not happen at Liberty where its students are respectful towards those they hear from, even if they profoundly disagree with them.  The students very often pray for and with those speakers as well.

Liberty’s decision to invite Carter does not signal a new direction for the University.  It is merely a reaffirmation of the principles the University stands for; having strong evangelical Conservative Christian foundations while letting its students know there is a larger world out there with people whom have many different viewpoints.  This is the way colleges and universities in America used to be and is one of the formulas for Liberty’s unparalleled success in the field of higher education.

Speakers at the institution founded by Rev. Jerry Falwell have included Ted Kennedy, Jesse Jackson, Gary Johnson, Tim Kaine, Bernie Sanders and many others who disagree with the conservative foundation of the University.  It would be well of other institutions of higher education to do the same as Liberty University has done.