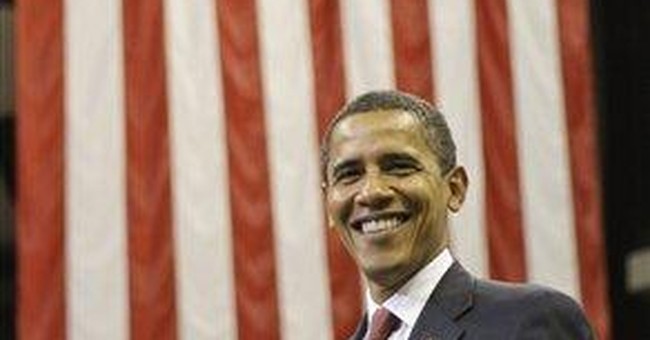 Wouldn’t it be the height of irony if Barack Obama wins this election as the Ronald Reagan tax-cutter? His tax plans are severely flawed and his campaign narrative to support them is all wrong. And yet a recent Rasmussen poll shows that 31 percent of voters believe Obama is the real tax cutter, while only 11 percent choose McCain.

Believe it or not, Obama seems to have swiped the tax-cut issue from the Republican party. How can this be?

Well, for almost two years Obama has talked about cutting taxes for 95 percent of the people. McCain has no such record. And even though McCain has launched a strong Joe the Plumber investor-class tax-cutting surge in the last days of the campaign, it may not be enough to significantly impact Tuesday’s voting results.

This is bad news since Obama has some pretty strange views on taxes. Just look at his recent explanation for the decline in third-quarter GDP. He calls it “a direct result of the Bush administration’s trickle-down, Wall Street first, Main Street last policies that John McCain has embraced for the last eight years and plans to continue for the next four.”

Is Obama really blaming the Bush tax cuts for this recession?

After the bursting of the tech bubble and the 9/11 attacks, George Bush lowered tax rates across-the-board for individuals and investors. For five years the stock market rallied without interruption -- the longest bull market without a correction in post-WWII history -- while the economy expanded for six years, a bit longer than the average post-war recovery cycle.

And Obama wants folks to believe that tax cuts caused this downturn? Not the credit shock? Not the Obama-supported government mandate to sell unaffordable homes to low-income people and the pressure on Fannie and Freddie to securitize these loans? Not the oil shock?

No self-respecting Keynesian would buy into this. Yet Obama was at it again in Monday’s Wall Street Journal, saying, “It’s not change to come up with a tax plan that doesn’t give a penny of relief to more than 100 million middle-class Americans.”

Regrettably, not even John McCain has contradicted this. But the facts speak otherwise.

So the facts of a middle-class tax cut are far different from what Obama claims. Obama also says his tax rates will be below those of Ronald Reagan. Wrong. Obama will raise the top rate to 39.6 percent, whereas Reagan left taxpayers with only two brackets of 15 and 28 percent.

Incidentally, the income cap for Social Security and Medicare taxes was about $42,000 when Reagan left office, compared with $104,000 today and the threat that Obama will raise that cap significantly.

It’s also worth noting that the Reagan tax-reform bill of 1986 mistakenly allowed the capital-gains tax rate to move up to 28 percent from 20 percent. Many believe this was a significant factor in the stock market crash of 1987.

Similarly, Obama intends to raise the cap-gains tax rate from 15 to at least 20 percent. It’s a risky move. Of course, Obama says only rich people will pay the higher cap-gains rate. But the reality is that a cap-gains tax hike will raise the after-tax cost of all capital, which will depress the future value of all equity assets.

McCain has recently proposed a reduction in the capital-gains tax rate from 15 to 7.5 percent. With 100 million-plus investors out there, and nearly two of every three votes in national elections being made by shareholders, this is right on target. Last Friday, McCain told me in an interview that a “low capital-gains tax is probably the greatest incentive for investment that we have in America today.”

In the frenetic final hours of the campaign McCain is also talking up his corporate tax cut, which would be a tremendous boost to plunging stock prices since corporate profits are the mother’s milk of stocks. Indeed, McCain’s overall tax-cut plan is far more powerful than Obama’s when it comes to creating jobs and stimulating economic growth. But his marketing effort appears to be too little, too late.

These things do, however, have a way of balancing out: If Obama and the Democrats go on a tax-hiking spree to penalize successful earners and investors, they will pay for it dearly in 2010 and beyond.