The Light at the End of the Crisis 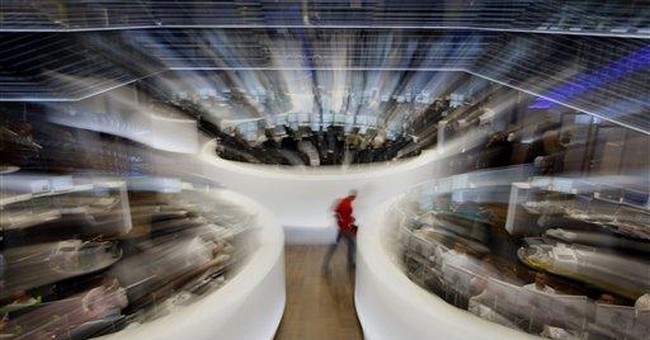 Fear and panic have taken over the stock market, the banking system, and the economy. It is one of those moments in history when people feel helpless, frustrated, and bewildered about what’s going on and why it’s happening.

Stocks are being pummeled in ways we haven’t seen in nearly a century, both here and overseas. The Dow Jones is down nearly 20 percent this week, its second worst week since December 1914. The S&P 500 dropped over 20 percent in what looks to be the worst week in the history of that index (going back to 1928).

Behind all this, the credit system is completely frozen. Banks are now loathe even to lend to each other in the overnight markets that are so vital to the daily financing of American business. And the profits outlook is deteriorating badly, sparking fears that we may have a deep and prolonged recession.

And yet, much good may ultimately come of this terrifying correction.

I commend everyone to read the Wall Street Journal op-ed of Friday written by John Steele Gordon, an eminent financial historian. Gordon writes that there have been financial panics roughly every twenty years throughout American history. He goes all the way back to Hamilton, who orchestrated the first banking bailout in 1792. From this came a regular money-supply system, a credible U.S. government debt system, and something of a disciplined banking system.

Gordon hopes that out of the current crisis we get a better system of well-capitalized banks regulated by a more unified government supervisory apparatus. My view is that the panic will pass and long-run American prosperity will continue. This may seem Pollyannaish right now, but I have great confidence that our free-market economy will come out better, with a strong financial underpinning, when the storm finally ends.

Paradoxical as it may be, strong government actions to stabilize banking are necessary to preserve the free-market-economy system. No free-market economy can survive without stable banking and credit. Without readily available credit, entrepreneurs can’t put their new ideas into commercial practice. And without that vital innovation, economic growth suffers.

The trick now is to use government levers in smart and efficient ways. Banks need to be recapitalized without punishing current and future shareholders. Henry Paulson is working on this. More than likely, the Treasury man and the G-7 finance ministers are figuring out a plan that will temporarily guarantee all short-term interbank lending in the New York and London money markets.

Britain has done this for its High Street banks. But the American and European banks in London are not guaranteed. This is the message of the LIBOR market, which has seized up. As of Friday, the three-month LIBOR dollar rate and its spread against Treasury bills have again increased significantly. This, in turn, is dragging down stocks.

In New York, the market for commercial paper issued by banks also has faltered. In fact, financial commercial paper has dropped nearly $160 billion in recent weeks. That’s why the authorities have to step in with a short-term backstop. Other measures to relieve banks of their distressed assets, backstop money-market funds, and guarantee all banking deposits will have a positive effect over time, as Paul Volcker noted in the Journal this week.

Meanwhile, the Federal Reserve has essentially moved off its fed funds rate target and is instead focused on injecting huge quantities of new cash into the banking system. The most basic money supply controlled by the Fed is now growing at a 16 percent rate after being nearly flat for 18 months. In the last five weeks the Fed has injected nearly $700 billion through a variety of lending facilities. This is important. The demand for liquidity during this period of asset and credit deflation cries out for massive new cash supplies from the central bank.

Then there’s oil, which is almost forgotten in this panic. The $150 oil shock and elevated prices at the pump are what worsened the credit crunch and hastened the recession. But now oil is about $80 a barrel. When the dust finally clears, lower energy prices will be an important tax-cut, pro-recovery factor. Meanwhile, the exchange value of the U.S. dollar is up 16 percent in recent months. That’s an anti-inflationary sign of confidence.

And as John Steele Gordon writes, hopefully we have learned to stop forcing banks to give mortgages to un-creditworthy customers, and to stop encouraging Fannie and Freddie to package these bad loans.

I recall the despair that surrounded the S&L/junk-bond credit crunch twenty years ago. Nobody believed prosperity would return for a long time. Commentators on the left wrote about the decline of the U.S. economy and American power. Yet the 1990s witnessed a strong prosperity boom; the free-market model of capitalism triumphed and the socialist model in Russia and elsewhere collapsed.

Yes, the months ahead are going to be tough. But I remain optimistic that our free democracy and free-market economy will survive this crisis as well.