McCain Must Talk Growth and Recovery 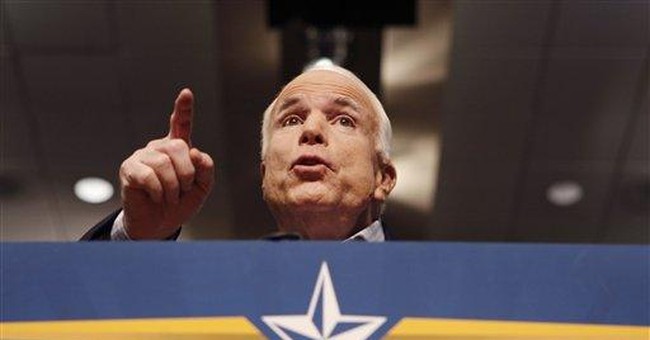 John McCain needs a knockout performance at Tuesday night's presidential debate if he is to keep his hopes alive.

Right now polls paint a dismal picture for Sen. McCain. Rasmussen shows Obama leading 52 to 44, Obama's highest level ever. (Moving above 50 percent is a key indicator.) The RealClearPolitics average has Obama up 6 points. InTrade shows Obama up by 34 points. It also could be that key states like Ohio and Florida are now up for grabs, while Obama could win in swing states like Virginia and North Carolina. McCain, of course, is moving out of Michigan.

The financial crisis and economic downturn clearly have buried Sen. McCain in recent weeks. Some of McCain's supporters think he can turn the page on the economy Tuesday night and instead attack Obama on character and qualifications. That doesn't seem realistic.

The recession economy and the financial crunch are front and center. Folks are asking: Can I get a loan? Will I have a job? Can I keep my house? Unfortunately, Sen. McCain's message overemphasizes government spending cuts, almost to the exclusion of stimulative and expansive tax cuts. This just doesn't seem like the right time for a government spending freeze, at least to the exclusion of other pro-growth policy levers. Sounds like too much root canal. More like Bob Dole than Ronald Reagan.

That's why McCain needs to stress that tax hikes of any kind would be a total disaster during this economic emergency and that letting folks keep more of what they earn is a recovery prescription. He needs to emphasize the need for across-the-board tax cuts for individuals and businesses. Lower marginal tax rates will reward work, investment and risk-taking. They also will put money in people's pockets as they keep more of what they earn.

McCain can point to Paul Ryan's modified flat tax with two brackets of 15 percent and 25 percent. That would be a great message. This is an economic emergency, and it calls for strong medicine. This is not the time to take away tax cuts. It's a time to add them. And reducing marginal tax rates would add substantially to taxpayer benefits on a permanent basis with new incentive rewards.

McCain should next talk about a corporate tax cut from 35 percent to 25 percent as a means of boosting jobs and wages. He should note that study after study shows that roughly two-thirds of the benefit of a corporate tax cut goes to the workforce. A corporate tax cut also is pro-investment and will make this country more competitive. But the key point is that a lower corporate tax rate is a job-creator. McCain must explain that you can't have jobs without healthy businesses that are funded by investment.

McCain also should state that the Federal Reserve needs to keep expanding the money supply. Milton Friedman taught us many years ago that the monetary contraction of 1929-32 was a key cause of the Great Depression. So Big Mac should tell Ben Bernanke to stop targeting the federal funds rate and pump up the money supply even more. Right now credit deflation and recession are the problems -- not inflation.

From the beginning of 2007 to the middle of 2008, the monetary base controlled by the Fed has grown only 1.6 percent at an annual rate. The basic M1 money supply has been flat. This amounts to a long-run liquidity squeeze. The credit-crunched economy desperately needs cash. But the Fed is not providing it.

Over the past three months, the central bank has stepped up a bit to a 4 percent to 5 percent growth rate. But that is still way too little in today's confidence-lacking banking environment. Everyone is hoarding cash rather than putting it to work. McCain should highlight this point.

He also should address all the Americans who might be worried about their bank accounts. He should propose that all deposits be guaranteed by the FDIC, at least temporarily. He might also suggest that G-7 central banks guarantee all inter-bank loans for regulated banks. (Hat tip to Wall Street economist John Ryding.)

Right now, McCain sounds austere when he addresses the economy. Tomorrow night he must sound expansionary for economic recovery. Tax cuts, free trade and money growth -- those are the pillars of recovery. An across-the-board tax cut for individuals and businesses will boost jobs at home and our competitiveness worldwide. Free trade benefits both consumers and businesses. The Fed's money supply must keep expanding.