Rapper Ice Cube, Who Benefited From School Choice, Denounces Trump, Who Supports It

Larry Elder
|
Posted: Mar 26, 2020 12:01 AM
Share   Tweet
The opinions expressed by columnists are their own and do not necessarily represent the views of Townhall.com. 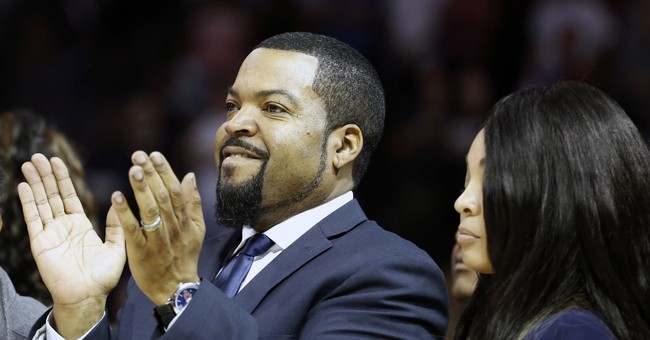 Rapper and actor O'Shea Jackson, commonly known as Ice Cube, supported President Donald Trump's impeachment and removal from office. Cube recently said he "can't wait to see" Trump in handcuffs. So, the black rapper, who became rich and famous by attacking the country's "racist" criminal justice system, now cheers on criminal justice -- at least when it comes to Trump.

But when it comes to how blacks have fared under Trump, Cube's objection to him becomes hard to fathom. Precoronavirus, blacks, under Trump, saw record lows in unemployment. Trump restored funding for historically black colleges and universities. He wants to stop unskilled illegal aliens from competing against unskilled Americans for jobs and wages. He increased funding for "opportunity zones" -- economically disadvantaged census tracts where investors receive favored capital gains tax treatment.

Trump signed the First Step Act that, during its first four months last year, allowed nearly 1,000 blacks to have their sentences reduced. The sentences for more than 1,000 prisoners of all races were reduced by a mean of 73 months, or 29.4%, but over 91% of the individuals whose sentences were shortened were black, and 98% were male. Trump posthumously pardoned Jack Johnson, the first black heavyweight champion and a victim of a racially motivated prosecution. Johnson originally applied for his pardon in 1920.

But there's an even bigger reason that blacks, like Cube, ought to get over their Trump Derangement Syndrome: School choice.

Cube, unlike most black kids living in urban America, was raised by two parents who wanted him to get the best possible education. Cube, in the movie "Boyz n the Hood," played a tough ghetto kid living in the gritty Crenshaw district of Los Angeles. But in real life, Cube did not attend Crenshaw High School.

About Cube, biography.com notes: "When Cube reached his teens, his parents pulled him out of his local school and bussed him to a suburban high school in the San Fernando Valley. For the young Cube, who'd known little beyond the deteriorating South Central L.A., the affluence and stability that marked his new surroundings left a deep impression. He saw his hometown in a new light and wondered why the violence and drugs that were wreaking havoc on it weren't generating more attention."

About Cube's upbringing, rapper Krazy D said: "He grew up in a bad area, but that still didn't make him authentic. He lived in an upper-class neighborhood, nice home, parents had money; he's always had it made. Not to take anything away from him, but he's an actor, right? He was acting like a gangster, and he was good at it. You can't take anything away from it, he's an incredible talent, but just he ain't the real deal."

The route to the middle class requires, at minimum, a high-school education. And, as Cube's parents knew, many urban high schools face huge student discipline problems. Many students cannot read, write or compute at grade level. To ensure that her son obtain a quality education, Barack Obama's mother sent Obama to live with his maternal grandparents in Hawaii. Obama attended the finest prep school in the state. As for Michelle Obama, she chose to be bussed three hours a day to a high school out of her neighborhood rather than attend the inferior local school. Daughters Sasha and Malia attended the private K-12 University of Chicago Lab School, where the current tuition for the highest grade offered is over $37,000. When the Obamas moved into the White House, the girls attended the exclusive Sidwell Friends School, where the 2020-2021 tuition is over $46,000.

About school choice, Trump said: "We believe that every parent should have educational freedom for their children. ... People want school choice." His secretary of education, Betsy DeVos, advocates the Education Freedom Scholarships and Opportunity Act. In an opinion piece co-authored by DeVos, she said: "Education Freedom Scholarships would annually give hundreds of thousands of students across the country opportunities to find the right fit for their education. The program would offer a dollar-for-dollar federal income tax credit for contributions to nonprofit organizations that provide scholarships for individual elementary and secondary school students. These scholarships would most benefit America's forgotten students who would finally have opportunities to pursue the best education for them in ways that rich, powerful and connected families always have."

"Racist" Trump wants to give the children of urban parents the same thing Barack Obama, the former Michelle Robinson and Ice Cube exercised -- a better education through school choice. So, by all means, let's bring out the handcuffs for this president who wants urban kids, like Cube, to have a better future.