Larry Elder
|
Posted: Aug 15, 2019 12:01 AM
Share   Tweet
The opinions expressed by columnists are their own and do not necessarily represent the views of Townhall.com. 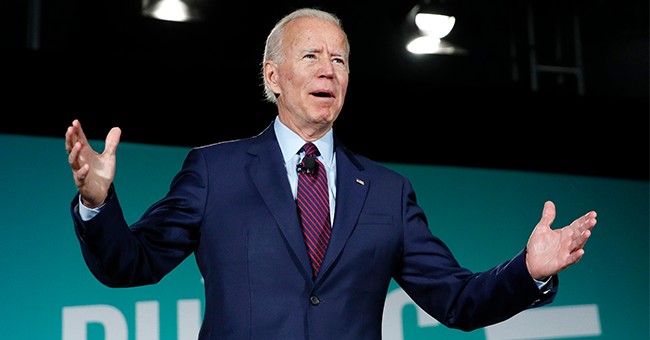 Former Vice President Joe Biden, in December 2018, said, "I am a gaffe machine." File that under the category of truer words have seldom been spoken.

President Donald Trump benefited in the 2016 presidential contest because the unfavorable numbers of his opponent, Hillary Clinton, matched or exceeded Trump's own unfavorable numbers. This time, in his bid for reelection, Trump's opponent could be Biden -- at this early date, still the front-runner for his party's nomination. Trump, of course, has been harshly attacked by Democrats, the media and even some Republicans for misstatements, exaggerations and, according to The Washington Post, uttering or writing some "10,000" falsehoods during his first 827 days in office.

But Biden's record of serial wrongheaded statements, verbal blunders and confusing comments makes him the wrong guy to mock Trump and take advantage of the president's verbal miscues. About his 2008 running mate, an exasperated Sen. Barack Obama reportedly said, "How many times is Biden going to say something stupid?" The answer is often. Here's just a sampling:

"Those kids in Parkland came up to see me when I was vice president." -- Biden, Aug. 10, 2019. The Parkland shooting was a year after Biden left office.

"(Mitt) Romney wants to let the -- he said in the first hundred days he's going to let the big banks once again write their own rules, unchain Wall Street. They're gonna put y'all back in chains." -- Biden, Aug. 14, 2012, before a largely black Virginia audience.

"If (President Obama and I) do everything right, if we do it with absolute certainty, we stand up there and we make really tough decisions, there's still a 30% chance we're going to get it wrong." -- Biden, Feb. 6, 2009.

"Stand up, Chuck, let 'em see you." When Chuck did not stand up, Biden said, "Oh, God love ya. What am I talking about? I tell you what, you're making everybody else stand up though, pal. Thank you very, very much. I tell you what, stand up for Chuck! ... You can tell I'm new." -- Biden, Sept. 9, 2008, at campaign rally, referring to Missouri State Sen. Chuck Graham, a paraplegic confined to a wheelchair following a car accident.

"When the stock market crashed, Franklin D. Roosevelt got on the television and didn't just talk about the, you know, the princes of greed." -- Biden, 2008, in a CBS interview. Television had not yet been invented in 1929, and Roosevelt was not yet president.

"This election year, the choice is clear. One man stands ready to deliver change we desperately need. A man I'm proud to call my friend. A man who will be the next president of the United States. Barack America!" -- Biden, Aug. 23, 2008, at an Illinois campaign rally.

"I mean, you've got the first sort of mainstream African American who is articulate and bright and clean and a nice-looking guy. I mean, that's a storybook, man." -- Biden, Jan. 31, 2007, in a conference call with reporters.

"You cannot go to a 7-Eleven or a Dunkin' Donuts unless you have a slight Indian accent. I'm not joking." -- Biden, June 17, 2006, to a voter referring to the growing number of people from India living in Delaware.

This collection does not include Biden's near expulsion from Syracuse University's College of Law over a plagiarism scandal. In a letter to the faculty, Biden pleaded, "If I had intended to cheat, would I have been so stupid?" Nor does it include Biden's plagiarism, during the 1988 presidential campaign, of a speech by British politician Neil Kinnock, a scandal that helped torpedo that campaign.

This is Biden's third attempt to win his party's nomination for the presidency, and the Iowa caucus and the New Hampshire primary aren't until next year. Were he to win the nomination and the presidency, he would be 78 on his first day in office. "Biden has truly lost his fastball," said Trump recently about the prospective opponent he insists he wants to run against. It's early, with many debates, speeches and talks with reporters and voters still ahead. This gives Biden plenty of time to establish himself as a formidable opponent against Trump.

It also gives Biden plenty of time to add to his growing list of gaffes.