Larry Elder
|
Posted: Feb 11, 2016 12:01 AM
Share   Tweet
The opinions expressed by columnists are their own and do not necessarily represent the views of Townhall.com. 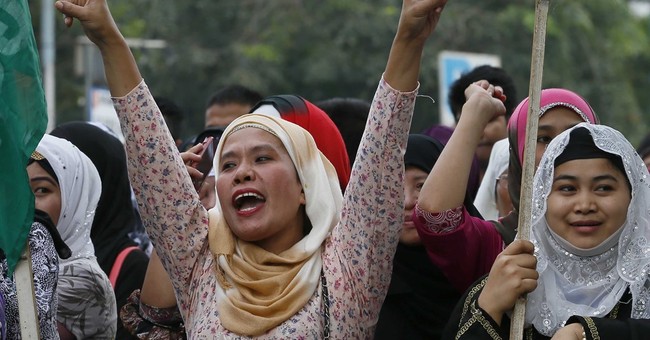 This fight against radical Islam is also a fight within Islam. Where, we constantly ask, are the voices of "moderation" who question the barbarity committed in the name of Islam?

Born in Saudi Arabia, this popular singer renounced her Saudi citizenship, lives in Europe and intends to become a citizen of a European country. On an Egyptian channel called Dream TV, Bandar said to the astonished host, "We have been fighting and shedding blood for 1,400 years, and now we are blaming America and Britain?"

Provided by the Middle East Media Research Institute, here is a translated transcript of the exchange:

Host: "Are you trying to sell the notion that foreign citizenship is the paradise that will save you from the hell of the Arab world?"

Shams Bandar: "Do you want me to be a hypocrite or not?"

Host: "I want the truth. Is it paradise?"

Host: "People will accuse you of treason, of collaboration, and the selling out of the Arab cause."

Bandar: "I have been accused of that for a long time now. It's nothing new. Foreign citizenship. ... It's not that I'm happy with the way things are, but let's not deceive ourselves. Why tell ourselves lies? The Syrians are scattered in the world's oceans, dying by the millions on a daily basis. ... Iraqis are dying by the millions. ... All the Arab countries have closed their borders to them. What can these wretched people do with their Arab citizenship? How does a suffering Syrian benefit from his Arab citizenship, when his children and family have been killed and his life has been destroyed? His own Arab brethren do not let him in. What if he were a British citizen? Wouldn't the British embassy send a ship to get their citizens out? Why are we lying? Why aren't we telling the truth? I'm not forcing people to get foreign citizenship."

Bandar: "They are not lifesavers. But in Britain or America ... note that I am against the policies of their governments. I always say so. But show me where it says in their constitutions that you can chop people's hands off, stone people, execute them in the streets, or do all the things done by ISIS and the Islamist movements, which are harmful to Islam. Do you see in the American constitution and law any of the things perpetrated by our Muslims? Can we say that they do these things in the West, too? Why would they, when their constitutions are all about the respect for humanity? Let's not get into what they do in secret, because I have no proof of that."

Host: "What about their barbaric, bloody, aggressive conduct?"

Bandar: "I see no evidence of that. All I see is laws, legislation, and constitution. Can anyone convince me that in America or Europe, they do what ISIS is doing to the Syrians, to the Yazidis, or to the Iraqis? Why do we pin all our problems on the West? For 1,400 years we have been slaughtering one another, just because one of us prays one way and another prays a different way. America wasn't around 1,400 years ago. It wasn't around even 300 years ago. We have been fighting and shedding blood for 1,400 years, and now we are blaming America and Britain?!"

After the Charlie Hebdo attack in Paris, Renald "Luz" Luzier, one of its principal Muhammad-drawing cartoonists, announced his intention to stop drawing the prophet, saying it "no longer interested" him. "I've got tired of it," he said, "just as I got tired of drawing (former French president Nicolas) Sarkozy. I'm not going to spend my life drawing them." Was it lack of interest -- or fear?

It is therefore all the more remarkable when we hear loud and brave voices like Pakistan's Malala Yousafzai, the schoolgirl shot in the head by the Taliban because she stood up for the right of girls to be educated. Yousafzai survived, won the Nobel Peace Prize and continues to speak out for the rights of Islamic women.

We pray for the safety of courageous truth-telling warriors like Yousafzai and Bandar.