Larry Elder
|
Posted: Jan 28, 2016 12:01 AM
Share   Tweet
The opinions expressed by columnists are their own and do not necessarily represent the views of Townhall.com. 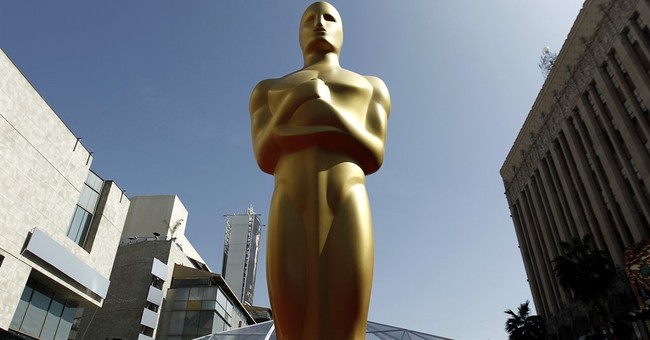 Here's how the nomination process works. There are about 6,200 voting members of the Academy of Motion Picture Arts and Sciences. The Academy is divided into 17 branches, with the actor division -- of 1,138 members -- the largest. Actors nominate actors in each of the four categories -- lead and supporting, actor and actress -- listing up to five names ranked in order of preference. The five nominees come from the highest-ranked names with the most votes beyond a minimum threshold. So all actor members literally "write in" their personal choices.

Actors are almost all leftist Democrats, so, according to the #OscarsSoWhite narrative, the same lefties who nominated and voted for Best Actors Halle Berry, Forest Whitaker, Denzel Washington, Jamie Foxx and others reverted to "racism" in the last two years, because during that period there were no black nominees.

Director Spike Lee and actress Jada Pinkett Smith say they are boycotting this year's "all-white" Oscars, and accuse the Hollywood industry of racism. But Hollywood, unlike the Department of Motor Vehicles, consists of privately owned companies with a singular goal -- to make fare that people wish to spend their money to see. In that regard, as to black consumers, the industry succeeds spectacularly. Blacks watch, on average, two hours more of television per day than whites, according to Nielsen ratings, and blacks purchase more movie tickets than do whites, according to the Motion Picture Association of America.

Can we ask the protesters to name the bigots' names? During the bad old days of Jim Crow and segregation, the evil had names. The governor who, at his inaugural speech, bellowed, "Segregation now, segregation tomorrow, segregation forever" had a name: George Wallace. The governor who refused to allow black boys and girls to attend white public schools in Arkansas in 1957 had a name: Orval Faubus. The Birmingham, Alabama, commissioner of public safety, who turned water hoses and sicced dogs on black and white civil rights protesters in had a name: Eugene "Bull" Connor.

So who are the Hollywood racists? Is it studio chiefs? Because of the Sony hack, we learned that former co-studio head Amy Pascal considered a black man, Idris Elba, to play the next James Bond. So, apparently, she isn't the one. According to annual studies from USC's Annenberg School of the top-grossing 100 films released every year, black actors have averaged 12.7 percent of the speaking roles from 2007 through 2014 -- virtually the same as blacks' percent of the population.

As to the white actors, actresses and directors who did get nominated, a question. Which ones did not deserve it? Did they break into the homes of Academy members, carrying guns and disguised with ski masks to make the members vote the way they did? Succeeding as an actor, given the competition and the non-existent barriers to entry, is arguably a more difficult and unlikely achievement than succeeding in professional sports. Those who have made it overcame long odds and fierce competition to do so. And now that they've "made it," should they feel guilty because they're white?

More important, why does it matter whether wealthy, spectacularly lucky and fortunate blacks get or don't get nominated anyway? A black friend, a successful actor-director, answered the question this way: self-esteem of young black boys and girls. But there's a huge problem with that argument. Decades of research overwhelmingly shows that black boys and white girls have higher self-esteem than do white boys and white girls. Black girls, for example, have a much healthier attitude toward their bodies than do white girls obsessed with a wildly unrealistic Barbie-doll-type body style. Turns out blacks derive their sense of self-esteem from the same places everybody else does -- their parents, relatives, friends, teachers and other influential role models in their own communities.

This "protest" is largely driven by a rich, successful director, Spike Lee, who put his New York City mansion up for sale at $32 million in 2014. That would provide the money to hire a team of psychologists to get him over his depression.

About the controversy, rapper Ice Cube points out that "Straight Outta Compton" did, in fact, get an Oscar nomination for best original screenplay. As to the #OscarsSoWhite controversy, Cube said, given the praise the movie has received, it's as if one were "crying about not having enough icing on your cake. ... It's ridiculous."