Larry Elder
|
Posted: Jan 07, 2016 12:01 AM
Share   Tweet
The opinions expressed by columnists are their own and do not necessarily represent the views of Townhall.com. 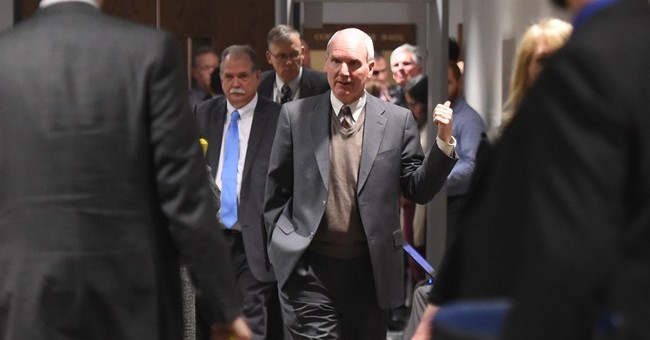 Why the near media-silence over the absurdly long-delayed trial of alleged serial killer Lonnie Franklin Jr.? Franklin would seem to represent ideal grist for the voracious 24/7 national media.

There is, of course, murder. He is charged with killing 10 and suspected of killing more. The crimes took place in a big, media-centric city, Los Angeles, as opposed to some obscure small town or rural community in a fly-over state ignored by national media.

There is an unsolved mystery that took place over a long time. Franklin was a former city trash collector who lived quietly in South Central Los Angeles. Neighbors described him friendly and helpful. He is alleged to have committed these crimes over a period of years, from 1985 through 2007. He was finally arrested in 2010.

There is sex. Serial killers who kill women attract a different kind of fascination than serial killers who kill men. The victims were young black women, from 15 to 35 years old -- many thought to be prostitutes and/or drug addicts. Evidence of sexual assault was found on most of the victims, whose discarded bodies were discovered in dumpsters and alleys. Hundreds of sexually explicit photos and videos were found in his home after his arrest, many depicting unidentified women who appeared to be asleep, unconscious or dead.

There are angry family members who show up for legal proceedings only to be informed that, sorry, the trial has been delayed yet again.

And a few years ago the local media even gave the killer a catchy and presumably attention-grabbing nickname, the "Grim Sleeper." The name meant that the killer would kill, lay low for long periods of time, before killing again.

Yet despite an arrest that occurred over five years ago, the lengthy process of jury selection has just begun. By contrast, the trial of Charlie Manson began less than a year after his apprehension. The mere fact that Franklin's trial has taken so long to begin would seem newsworthy. The prosecution has long been ready to try the case, but the defense lawyer throws up motion after motion and requests additional discovery, much to exasperation of the judge and angry victims' families who wonder whether their dead love ones will ever get justice.

Crafty defense lawyers delaying legal maneuvers is one thing. Franklin's attorney argues, of course, that repeated motions for psychiatric evaluations and for discovery simply ensure that Franklin gets a fair trial. But why the yawning indifference by much of the LA local media, and nearly all of the national media? What happened to "justice delayed is justice denied"?

But Franklin is black. All of the victims, as well, are black. Therefore, this is black-on-black murder, an occurrence about which our media -- and the "Black Lives Matter" movement -- are simply less interested. White cops killing black suspects is one thing. But black-on-black crime, well, what's the upside?

Activists and our national media pay far more attention to the rare instance in which a white cop kills a black suspect than the all-too-often black-on-black murders. How rare? In Chicago, for example, in 2011, police killed 23 people. In 2015, the number was eight. The city ended 2015 with nearly 500 murders, more than 40 per month, mostly black-on-black in a city just one-third black.

Nearly half of the nation's homicides are black-on-black. Were the media to focus attention on it, the "Black Lives Matter" activists would then denounce the media and accuse them "of making blacks look bad and trying to destroy their image." White defendants are safer.

This myth has consequences.

Recall the murdering duo known as the D.C.-area Beltway Snipers. Profilers convinced cops to focus on white suspects. Profilers and pundits appeared on television, repeating the mantra that "nearly all serial killers are white." This misdirection allowed the killers John Muhammad and his accomplice, Lee Malvo, who were black, to continue their killing spree despite having been stopped by cops (SET ITAL) several times (END ITAL) before their eventual apprehension.

In the case of Lonnie Franklin Jr., the notion that "nearly all serial killers are white" likely added to the investigators' failure, for some time, to link these murders to just one killer. So even more people died while the police looked away or looked in the wrong place for the wrong person.

This brings us back to the media indifference. Don't black lives matter?