SCOTUS: Congress Doesn't Want to 'Destroy' Our Health-Care System? Oh, Yes, It Does! 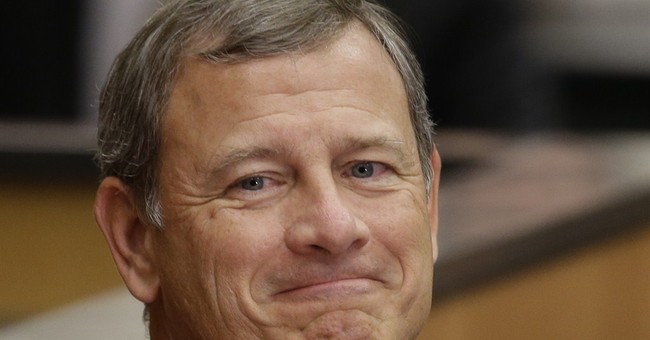 Trending
For the second time, Chief Justice John Roberts breathed life into Obamacare and rescued it from the Constitution.

In the first big Obamacare ruling, Roberts called Obamacare a "tax," and therefore lawfully enacted as consistent with the powers of Congress -- and not a violation of the Commerce Clause. Never mind the Obama administration sold Obamacare with the assurance that individuals who failed to purchase health insurance would incur a penalty -- not a tax.

On this latest ruling, Roberts takes the words "established by the State" to mean "established by the states or by the federal government" -- even though the last five words appear nowhere in the law passed by Congress and signed by President Obama.

Obamacare's architect, Jonathan Gruber, admits on videotape the law was written this way by the feds to "squeeze" the states into setting up state-run health care exchanges -- by offering tax credits to the citizens of those states  only if their state set up an exchange. No state exchanges -- meaning that state's citizens have to use the federal exchange -- and no tax credits for you. That simple, that clear.

But Roberts argued, "Congress passed the Affordable Care Act to improve health insurance markets, not to destroy them." Thus, Roberts reasoned, the interpretation by the plaintiffs would erode, not preserve and expand, our health-care system.

On the contrary, Mr. Chief Justice -- Obama and the Democrats have every intention of "destroying" our insurance-based health care system in favor of single payer or, as Rep. John Conyers, D-Mich., puts it, "Medicare for all."

In 2003, Obama, then an Illinois state senator, addressed an audience at a AFL-CIO conference on civil, human and women's rights: "I happen to be a proponent of a single-payer, universal health-care program. I see no reason why the United States of America, the wealthiest country in the history of the world, spending 14 percent of its gross national product on health care, cannot provide basic health insurance to everybody. ... A single-payer health care plan, a universal health-care plan. That's what I'd like to see. But as all of you know, we may not get there immediately. Because first we've got to take back the White House, we've got to take back the Senate, and we've got to take back the House."

The Las Vegas Sun headline was blunt: "(Sen. Harry) Reid (D-Nev.) Says Obamacare Just a Step Toward Eventual Single-Payer System." In an August, 2013, Las Vegas PBS-TV appearance, the then-Senate majority leader said we need to "work our way past" our insurance-based system: "What we've done with Obamacare is have a step in the right direction, but we're far from having something that's going to work forever." Asked whether Obamacare is just a stopgap on our way to that type of system, Reid said, "Yes, yes. Absolutely, yes." He added that he pushed for it in 2009: "We had a real good run at the public option. ...Don't think we didn't have a tremendous number of people who wanted a single-payer system."

Howard Dean, the former Democratic National Committee chair, also describes Obamacare as just a step toward the elimination of our insurance-based system in favor of single-payer. During the 2008 presidential campaign, Dean talked about the health-care proposals of Democratic candidates Barack Obama and Sen. Hillary Clinton, D-N.Y., and compared their proposals to that of Republican Sen. John McCain: "I think while someday we may end up with a single-payer system, it's clear that we're not going to do it all at once, so I think both candidates' health-care plans are a big step forward. Certainly compared to Sen. McCain, who represents a big step backward."

Does anyone really believe the Obamacare promises of quality, accessibility and low costs can be achieved while retaining our insurance-based system? Obamacare promised to add 30 million newly insured to Medicaid; force insurers to accept those with pre-existing illnesses; raise no taxes on the middle class to pay for it; force insurance carriers to allow "children" under the age of 26 to remain on their parents' policy; allow you to keep your doctor and your plan -- if you chose to; disallow carriers from "discriminating" against men and women in setting prices; save the "typical family" $2,500 in premiums; and not "raise the deficit by one dime."

Even under Obama, there is no such thing as a free lunch. To pay for these government-imposed expenses, insurance carriers are seeking higher premiums while imposing higher deductibles and co-pays. Since health care is a "right," since Obamacare was to be "affordable" and since the greedy, nasty insurance companies seek profits, the left will then say, "We have no alternative. Medicare for all!"

So, yes, Mr. Justice Roberts, Democrats who passed Obamacare without a single Republican vote absolutely seek "to destroy" and "not improve health insurance markets." This is all according to plan.