Why There Can Never Be 'Peace in the Middle East' 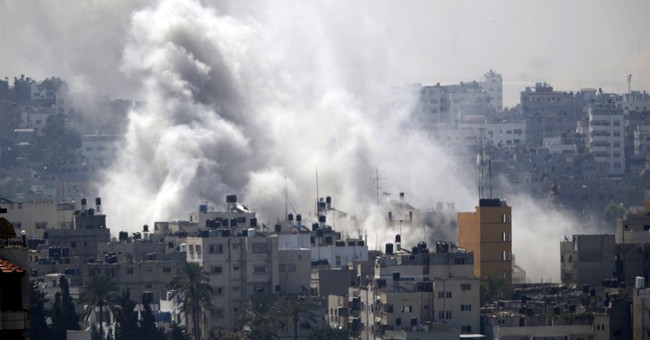 Trending
Secretary of State John Kerry is the latest to think the power of his personal diplomacy can bring "peace to the Middle East." But, once again, when one side publicly calls for the destruction of the other, what is there to discuss?

Hamas, designated a foreign terrorist organization by the U.S., has governed the Palestinian territory of Gaza since they defeated rival Fatah, the group that governs the West Bank. Hamas, along with Hezbollah, Palestine Islamic Jihad, the Popular Front for the Liberation of Palestine-General Command, Iraqi militant Shiite groups and other terror organizations, is funded in part by Iran, whose leaders routinely call for the destruction of the "fictitious" state of Israel.

Hamas' covenant calls for the destruction of Israel. The preamble reads: "Israel will exist and will continue to exist until Islam will obliterate it, just as it obliterated others before it." Article Three describes the duty of all Muslims: "(To) fear Allah and raise the banner of Jihad in the face of the oppressors."

Article Seven states: "The Day of Judgment will not come about until Muslims fight Jews and kill them. Then, the Jews will hide behind rocks and trees, and the rocks and trees will cry out: 'O Muslim, there is a Jew hiding behind me, come and kill him.'"

Article Eleven clarifies their belief that "the land of Palestine is an Islamic Waif (Holy Possession) consecrated for future Muslim generations until Judgment Day. No one can renounce it or any part, or abandon it or any part of it."

Article Thirteen flatly states: "Palestine is an Islamic land. ... Since this is the case, the liberation of Palestine is an individual duty for every Muslim wherever he may be." It also says, "There is no solution for the Palestinian problem except by Jihad."

Any doubt about how committed Hamas is to Israel's destruction?

In 2006, a mother of six sons successfully ran for parliament in Gaza under the Hamas party, billed as the "Mother of the Struggle." Three of Miriam Farahat's sons died in the so-called "intifada" or resistance against Israel. How pained is she over the loss of her sons? A Hamas recruitment video features Farahat showing her 17-year-old son how to kill Israelis and telling him not to come back. Mission accomplished. In 2002, that son murdered five Jewish students. Another son was killed when the Israeli Air Force blew up his vehicle, which was carrying Kassam rockets. Farahat celebrated his death: "I am so proud. I wish I had more sons to offer."

How far Israel is willing to go for peace was demonstrated in 2000.

During the waning months of the Clinton administration, the President sought to at last, finally, and for once and for all achieve "peace in the Middle East." The prime minister of Israel, Ehud Barak, was perhaps the most dovish PM in the history of Israel. Clinton, through his envoy Dennis Ross, pushed the two sides into what even cynical observers called an important breakthrough.

Israeli Prime Minister Ehud Barak offered the following: to withdrawal completely from Gaza, to surrender almost all of the West Bank and to give the Palestinians most of Arab East Jerusalem, which would be their new capital. Israel agreed to dismantle Jewish settlements to achieve those objectives, and would allow a certain number of Palestinians to "return" to Israel, with additional compensation for Palestinians not allowed to return.

In exchange Yasser Arafat, the head of the Palestine Liberation Organization, was required to do one thing -- renounce violence against Israel and accept its right to exist as a Jewish state. Arafat walked away and thus began the so-called Second Intifada, a burst of violence that left over 1,000 Israelis dead by 2005.

The late Israeli Prime Minister Golda Meir famously said, "Peace will come when the Arabs will love their children more than they hate us." How deep is the hate?

In 1986, Nizar al-Hindawi, a Jordanian, and his pregnant Irish-Catholic girlfriend made arrangements for marriage. They discussed plans for an immediate flight from London's Heathrow airport to Tel Aviv, Israel, followed by a trip to Jordan for the marriage ceremony and a honeymoon. But Hindawi booked a separate flight for his pregnant fiance, explaining to her that -- oops! -- his employer had already paid for him to travel to Israel on a later flight. He bought her a ticket to Israel on El Al, giving her a wheeled suitcase to use.

An alert Heathrow airport El Al screening agent, suspicious of an unmarried, visibly pregnant Irish woman traveling alone to Israel for a vacation during Passover, ordered her luggage searched. Security discovered a false bottom in the suitcase -- clearly unknown to the young pregnant girl -- underneath which lay 3 1/2 pounds of the same type of plastic explosive later used to blow up a Pan Am plane over Lockerbie, Scotland.

Prime Minister Meir also said this: "When peace comes we will perhaps in time be able to forgive the Arabs for killing our sons, but it will be harder for us to forgive them for having forced us to kill their sons."