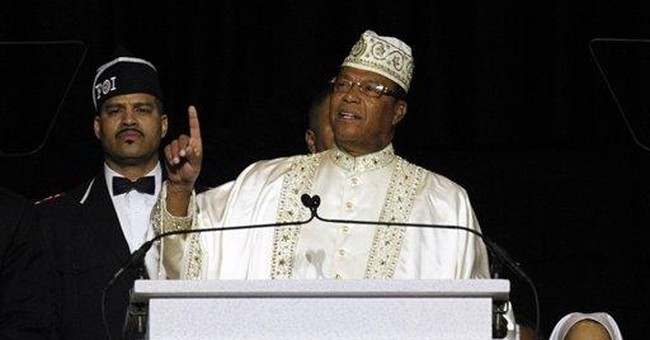 Trending
The White Man made him do it.

"We voted for our brother, Barack," said Farrakhan, "a beautiful human being with a sweet heart, and now he's an assassin. They've turned him into them."

"Them," of course, refers to the evil, racist, manipulative, all-powerful White Man, who as in "Invasion of the Body Snatchers," seized Obama's mind, body and soul, and changed him into an enemy of the poor, the downtrodden, the black.

Don't snicker. Farrakhan may be on to something.

Here's what presidential candidate Obama said about use of force: "The president does not have power under the Constitution to unilaterally authorize a military attack in a situation that does not involve stopping an actual or imminent threat to the nation." Congress passed the War Powers Resolution in 1973 to restrain the president in non-imminent threat situations. Obama, however, disagrees that it applies to Libya. This humanitarian mission, Obama argues, does not involve "hostilities," a condition that triggers the WPR's application.

Secretary of Defense Robert Gates, however, before Obama made his Libya decision, told Congress what a "no-fly zone" over Libya required: "Let's just call a spade a spade. A no-fly zone begins with an attack on Libya to destroy the air defenses ... and then you can fly planes around the country and not worry about our guys being shot down." Sounds a lot like "hostilities." And Americans, by a two-to-one ratio, oppose military involvement in Libya.

Reagan, in the early '80s, faced an even tougher economy, with higher unemployment, higher inflation and higher interest rates. Reagan cut taxes, slowed the rate of domestic spending and decreased regulation on businesses.

Sociologist Charles Murray, in one of the most important books on public policy in the last 50 years, "Losing Ground," explained how welfare dependency increased the number of black out-of-wedlock births. The Welfare Reform Act of 1996 resulted in a dramatic decline in the welfare rolls, without a corresponding increase in abortion. Welfare recipients, a large percentage of whom are minorities, found jobs and became self-sufficient.

The White Man discovered an inexperienced, left-wing, collectivist, spread-the-wealth, tax-the-rich black senator from Illinois who had not read Murray's book or, if he had, did not believe it. In fact, then-Illinois State Senator Obama spoke out against the Welfare Reform Act.

Determined not to repeat the Reagan mistake, The White Man hatched a plan.

Obama would be The One.

The White Man engineered his election, then programmed the charismatic Obama to enact policies guaranteed to have the opposite effect of Reagan's policies:

The White Man made Obama raise the minimum wage. This increases unemployment for those with the lowest skills, a disproportionate percentage of whom are black.

The White Man made Obama sign laws to rein in "Wall Street greed," but left untouched the real reasons behind the housing meltdown: Freddie Mac, Fannie Mae, the FHA and the Community Reinvestment Act, all of which induced the otherwise non-creditworthy -- a disproportionate percentage of whom are racial minorities -- to take on mortgages they could not afford.

The White Man made Obama oppose choice in education, including the D.C. Opportunity Scholarship program that, by lottery, gave vouchers to inner-city Washington, D.C., children and saw high school graduation rates increase from 70 percent for applicants not offered a scholarship to 82 percent for the scholarship recipients.

The White Man made Obama support a nearly trillion-dollar "stimulus" package -- largely giving money to state workers and other supporters of the Democratic Party. It neither "saved or created" 3.5 million jobs nor prevented unemployment from reaching 8 percent. Unemployment actually rose to 10.2 percent, and now stands at 9.1 percent.

The results have exceeded The White Man's expectations. Black teen unemployment is nearly 41 percent. The unemployment rate for black adult males is 17.5 percent. Yes, Obama's war for Big Oil and his anti-black economic polices mean lots of whites get trampled in the process. Collateral damage. Friendly fire. Addition by subtraction.

The White Man, as Farrakhan duly notes, is back.