$5 Gas Predicted Under Obama -- What, No Pitchforks? 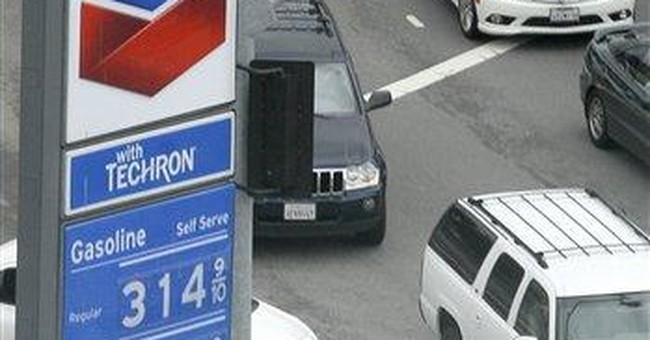 Five dollars per gallon of gas by 2012! A former president of Shell Oil considers this likely. The average price on Christmas Day for a gallon of regular gas reached $3.28 in Los Angeles County, the highest price since October 2008. In one month, the price rose 13 cents, up 35 cents year to year.

Where are the calls to sic Obama's Justice Department on Big Oil to hold the oil companies accountable for "market manipulation"? Why aren't we hunting down the amoral "oil speculators" responsible for repealing the law of supply-and-demand in order to line their pockets?

During President George W. Bush's administration, we constantly heard demands to hold the President accountable for "Big Oil's price gouging." House Speaker Nancy Pelosi, D-Calif., just two years ago, knew exactly whom to blame for "skyrocketing" oil prices: "The price of oil is at the doorstep; $4-plus per gallon for oil is attributed to two oilmen in the White House and their protectors in the United States Senate."

In 2007, when the average national price ranged from $2.17 to $3.22, then-Sen. Barack Obama demanded that the Federal Trade Commission investigate Big Oil for "price manipulation." In 2008, presidential candidate Obama urged the Justice Department "to open an investigation into whether energy traders have been engaged in illegal activities that have helped drive up the price of oil and food."

Obama also called for "a windfall profits penalty on oil selling at or over $80 per barrel." As of Christmas 2010, a barrel of oil sold at slightly above $90. What happened to the windfall profits tax?

The average price was $1.72 on March 5, 2003, when CBS News posted a story online with this headline: "Dems Blame Bush For High Oil Prices." It referred to an investigative report by Sen. Carl Levin, D-Mich. Levin blamed Bush's post-9/11 decision to increase the amount of oil in the Strategic Petroleum Reserve by 40 million barrels in 2002 -- bringing the total to 600 million. Levin said, "We're confident this had a significant impact on the price of oil in 2002." Never mind that the Bush administration called the amount of oil diverted too small to matter.

The average price was $2.80 on April 22, 2006, when USAToday.com posted an article with the headline "Democrats blame Bush for high gas prices": "Consumer gasoline prices continue to soar as the Bush administration places too much emphasis on drilling reserves and not enough on alternative fuels, Democrats said." The article quoted Sen. Bill Nelson, D-Fla., who praised Brazil's "energy independence." "In Brazil," Nelson said, "drivers are filling up their cars with ethanol instead of gasoline."

Brazil may be "energy independent" in that it imports only a small percentage -- 649,000 barrels per day in 2009 -- of the oil it consumes. But that makes Brazil the 19th-highest oil-importing country in the world. Its economy relies heavily on oil that is domestically produced and consumed. Brazil is the seventh-largest consumer of oil in the world and the ninth-largest producer. Its famous -- and heavily government-subsidized -- sugar cane-based ethanol fuel is actually a blend that uses approximately 75 percent gasoline.

As for U.S. ethanol, which is made from corn, Nobel laureate environmentalist Al Gore recently called it a bad deal: "It is not a good policy to have these massive subsidies for first-generation ethanol. First-generation ethanol, I think, was a mistake. The energy conversion ratios are at best very small. ... The size, the percentage of corn particularly, which is now being (used for) first-generation ethanol definitely has an impact on food prices. The competition with food prices is real." Why did he once support ethanol? He admitted that he'd wanted to help farmers in Iowa, site of the nation's first caucus, since he "was about to run for president."

The silence over the recent price run-up is yet the latest example of left-wing hypocrisy. It was always about bludgeoning Bush rather than a sincere conviction that Big Oil was cheating. How else to explain the absence of demands for investigations?

America could achieve "energy independence" if producers were allowed to drill in Alaska, the lower 48 and offshore, where substantial amounts of untapped oil remain off-limits. Obama, who currently squanders hundreds of billions of taxpayer dollars by "investing" in alternative energy, possesses no more control over the law of supply-and-demand than did "evil" Oilman Bush.