Obamanomics Supporters - Cracks in the Dike 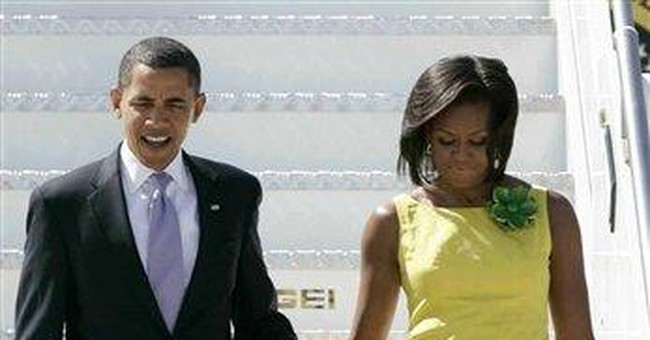 While the media stopped to cover Michael Jackson's death, several tremors rocked the foundation of something that actually affects us all -- Obamanomics.

First, former Secretary of State Colin Powell, who supported the President over his Republican rival, criticized Obama's spending, saying "we can't pay for it all." Powell said: "I'm concerned at the number of programs that are being presented, the bills associated with these programs and the additional government that will be needed to execute them. ... One of the cautions that has to be given to the President -- and I've talked to some of his people about this -- is that you can't have so many things on the table that you can't absorb it all."

Second, a few days ago, respected British economist Tim Congdon dusted off a 2003 paper -- written pre-Obama spending -- by the Federal Reserve's senior economist. It warned of the nation's growing debt and deficit, calculating their impact on long-term interest rates. The Fed's conclusion? "A percentage point increase in the projected deficit-to-GDP ratio raises the 10-year bond rate expected to prevail five years into the future by 20 to 40 basis points. ... Similarly, a percentage point increase in the projected debt-to-GDP ratio raises future interest rates by about 4 to 5 basis points." In plain English, this means, as Congdon puts it, a "debt explosion." Applying the 2003 paper's calculations and assumptions to our debt and deficit numbers under Obama, Congdon sees the "horrifying" consequences of bank bailouts and increased public spending.

Third, billionaire/Obama supporter Warren Buffett warned of impending inflation caused by increased government spending. "A country that continuously expands its debt as a percentage of GDP," he said, "and raises much of the money abroad to finance that, at some point, it's going to inflate its way out of the burden of that debt. ... Every country that's denominated its debt in its own currency and has found itself with uncomfortable amounts of debt relative to the rest of the world, in the end they inflate. And that becomes a tax on everybody that has fixed dollar investments."

Fourth, the Obama-supporting/George W. Bush-hating/billionaire benefactor of hyper-liberal MoveOn.org, George Soros, predicted that the administration's spending and borrowing will trigger inflation and higher interests rates. "As markets revive," he said, "fear of inflation will drive up interest rates, which will choke off recovery." (Emphasis added.)

Our country rushes ever closer to a Canadian/European economic model, where government spends a greater and greater percentage of the nation's income -- whether on education, "bailing out" private companies, "assisting" states that have imprudently run their affairs, supplying "free" health care and health insurance, or the creation of "green jobs" to battle "global warming."

President Obama and the Democratic Party's congressional supermajority represent nothing less than a grave and gathering threat to that which made America great -- free enterprise, competition, allowing people to keep as much of their own money as possible, and the assumption that people know better how and on what to spend their money than does government.

The Republicans -- who, remember, supported the first bailout, under Bush -- are only slightly better.

The first President Bush signed into law the Americans With Disabilities Act, telling private employers under what circumstances they should hire and "accommodate" those with "special challenges." Republican Richard Nixon established the Environmental Protection Agency. The second Bush signed the prescription benefits bill for seniors. And on and on it goes.

I voted against G.W. Bush the first time because he promised greater government involvement in education, health care and other aspects of our lives. So I "threw away my vote" and voted libertarian.

I voted for Bush in '04 because of 9/11. I agree with Bush's recognition that we are at war with Islamofascism and that it represents the greatest threat to civilization. I supported and still support our intervention in Iraq. But I consider it a matter of national security, not a pretext to "spread democracy."

I opposed our intervention in Somalia, Kosovo, Bosnia, Haiti (all under Clinton) and Lebanon (under Reagan). Military intervention is for one thing only -- national security. So while I am incredibly saddened by the genocides in Rwanda and Sudan, this is no reason for our nation to send troops. If mercenaries choose to go and fight for one side or another, that is their choice. And people and organizations can and do send supplies, workers and money for humanitarian purposes.

I believe that U.S. intervention in World War I was a mistake and that the European monarchies should have been allowed to obliterate themselves. The punitive Treaty of Versailles angered the Germans and set the stage for the rise of murderous demagogue Adolf Hitler. I once offered this WWI analysis directly to former Secretary of State Henry Kissinger (who wrote a blurb for my second book), and he said, "There is much in what you say."

Now we have another threat to our security. It comes from within. We must fight this one with a war of ideas. The new threat is called Obamanomics.