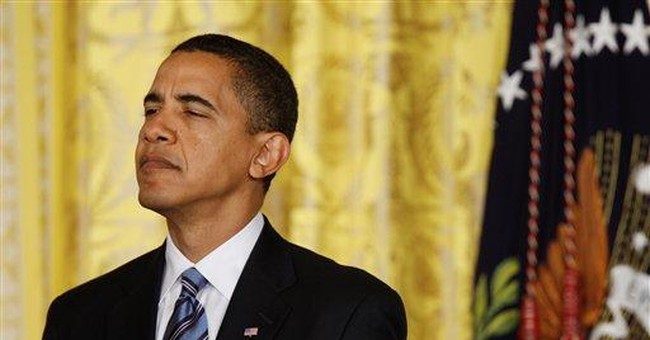 "When," someone recently asked me, "does President Obama's media 'honeymoon' period end?"

Oh, sure, every relationship experiences peaks and valleys. But the "mainstream media" wanted Obama to win, and helped him do so. If Obama were a stock, the media would be "fully invested."

Obama's inauguration showed the double standard on full display. The final tally for all the expenses won't be out for a few months, but clearly the cost of Obama's inauguration meets or exceeds Bush's four years ago, even adjusted for inflation. And expect a higher price for security, in large part because about 400,000 people attended Bush's last inauguration versus Obama's 1.5 million to 1.8 million. Obama's inaugural committee budgeted about $45 million for the fun stuff -- such as balls and concerts and parades -- with taxpayers putting up $49 million more, and local jurisdictions are asking federal taxpayers for another $75 million to cover their costs.

But back in 2005, when Bush's second inaugural costs (excluding security) reached $42 million, the media attacked. Unseemly! Exorbitant! Extravagant! How can Bush justify the spending during wartime? Not only does the country remain at war, but our country now suffers a serious recession.

So what do the mainstream media say about Obama's inaugural "extravagance"? Virtually nothing. One Associated Press article, headlined "For inaugural balls, go for glitz, forget economy," opened with this lead: "So you're attending an inaugural ball saluting the historic election of Barack Obama in the worst economic climate in three generations. Can you get away with glitzing it up and still be appropriate, not to mention comfortable and financially viable? To quote the man of the hour: Yes, you can. Veteran ballgoers say you should. And fashionistas insist that you must." Four years ago, an Associated Press article that attacked Bush's "extravagant" inauguration listed things $40 million could buy -- from Humvees to vaccinations.

Here are just a few examples -- from the new president's first few days -- that caught little flak from the media:

--Obama's nominee for Treasury secretary. When now-Treasury Secretary Timothy Geithner worked for the International Monetary Fund, the IMF informed all employees -- in writing -- that they owed payroll tax. They actually increase their compensation with an allowance to offset the taxes. Geithner took the money but failed to pay the $34,000 in taxes. He called it an honest "mistake."

--Obama restricts lobbyists. Obama announced "tough" new ethics rules to restrict lobbyists from jobs in his administration. The President then granted a "waiver" for deputy secretary of defense nominee William Lynn, a former Raytheon lobbyist. So the anti-lobbyist ethics rules apply -- until they don't. Oh.

--Obama ends "torture." Obama announced the end to "torture" and restricts the methods of questioning terrorist detainees to the 19 psychological techniques set out in the Army Field Manual. The manual prohibits threats, force and physical contact, including waterboarding. But wait. Obama intends to set up a special task force to determine the adequacy of the Army manual and to recommend "additional or different guidance for other departments or agencies." So Obama intends to restrict the methods of interrogation, unless and until he doesn't want to restrict them. And Obama's choice for national intelligence director, retired Adm. Dennis Blair, refused to say during his confirmation hearings whether he considers waterboarding "torture." Oh.

--Obama closes Gitmo. Obama fulfilled a campaign promise and signed an executive order to close the detention center at Guantanamo Bay. He says the process will take about a year. Bush, by the way, wanted to close Gitmo, too (as did Republican presidential candidate John McCain), but ran into the same challenges that now face Obama. Where will the detainees go, reporters asked Obama. What kind of legal procedures apply? Will he transfer any of the detainees to American soil? If so, how would that affect their legal status? What about the Pentagon's claim that 61 prisoners released from Gitmo have returned to extremist activities and battlefields?

What about Gitmo detainees like Said Ali al-Shihri, whom we released to Saudi Arabia? After "anti-jihad re-indoctrination," the Saudi government considered him rehabilitated and released him. Authorities now call him al-Qaida's No. 2 guy in Yemen. What about these questions, Mr. President? Well, we'll get to them.

The major news media saw former President George W. Bush as a villain and themselves as sheriff. Obama, on the other hand, enjoys their support. To the news media, Obama represents a combination of Martin Luther King, Gandhi and rock star. They will downplay errors, explain away mistakes, and -- if efforts fail to achieve the desired results -- they can always blame Bush.

That Loudmouth Troublemaker Is An FBI Snitch
Townhall
'I was told NO POLITICS at school. You LIED to me': 9-year-old student DROPS entire school board over BLM posters and DAMN (watch)
Twitchy
Bill Maher Torches California for Its Heavy Regulation
Redstate
Slave Stories History 'Forgot.' Black People Owned Slaves Too
PJ Media