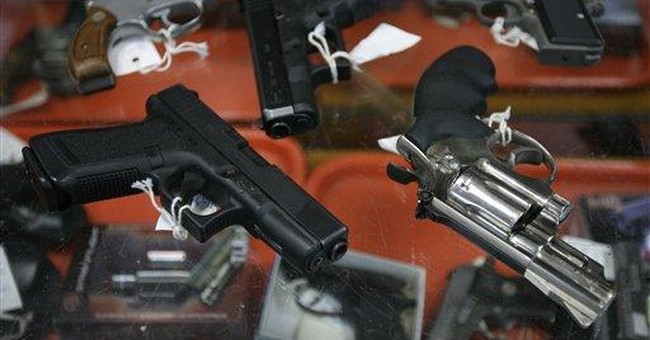 The Supreme Court, in a 5-4 decision, struck down the ban, holding that a) the Second Amendment gives individuals the right to keep and bear arms, and b) while the government may regulate the boundaries of the Second Amendment, the DC ban goes too far.

The New York Times, in an editorial condemning the Supreme Court case, says: "Thirty-thousand Americans are killed by guns every year -- on the job, walking to school, at the shopping mall. The Supreme Court on Thursday all but ensured that even more Americans will die senselessly."

The 30,000 number includes 17,000 suicides. But a person intent on suicide finds a way -- gun or no gun. In Japan, for example, more than twice as many people, per capita, kill themselves, yet that country bans handguns.

The hand-wringing New York Times editorial fails to ask the following questions: How many Americans use guns to defend themselves? Of that number, how many believe that but for their ability to use their guns in self-defense, they would be dead?

"When a robbery victim does not defend himself," former assistant district attorney and firearms expert David Kopel writes, "the robber succeeds 88 percent of the time, and the victim is injured 25 percent of the time. When a victim resists with a gun, the robbery success rate falls to 30 percent, and the victim injury rate falls to 17 percent. No other response to a robbery -- from drawing a knife to shouting for help to fleeing -- produces such low rates of victim injury and robbery success."

Criminologist and researcher Gary Kleck, using his own commissioned phone surveys and number extrapolation, estimates that 2.5 million Americans use guns for defensive purposes each year. One in six of that number, or 400,000, believe someone would have been dead but for their ability to resort to their defensive use of firearms. Kleck points out that if only one-tenth of the people are right about saving a life, the number of people saved annually by guns would still be 40,000.

The Department of Justice's own National Institute of Justice study entitled "Guns in America: National Survey on Private Ownership and Use of Firearms" estimates that 1.5 million Americans use guns for defensive purposes every year. Although the government's figure estimates a million fewer people defensively using guns, the NIJ calls their figure "directly comparable" to Kleck's, noting, "It is statistically plausible that the difference is due to sampling error." Furthermore, the NIJ reports that half of their respondents who said they used guns defensively also admitted having done so multiple times a year -- making the number of estimated (SET ITAL) uses (END ITAL) of self-defense with a gun 4.7 million times annually.

UCLA Professor Emeritus James Q. Wilson, a respected expert on crime, police practices and guns, says: "We know from Census Bureau surveys that something beyond 100,000 uses of guns for self-defense occur every year. We know from smaller surveys of a commercial nature that the number may be as high as 2 1/2 or 3 million. We don't know what the right number is, but whatever the right number is, it's not a trivial number."

But what of the Washington, DC, gun ban?

Why not ask the real experts -- criminals?

The U.S. Department of Justice's National Institute of Justice surveyed 2,000 felons in state prisons. It asked whether "one reason burglars avoid houses when people are at home is that they fear being shot during the crime." Seventy-four percent of the felons said yes. The survey also asked these felons whether they had abandoned at least one crime because they feared the intended suspect might be armed. Thirty-nine percent said they abandoned at least one crime; 8 percent had abandoned such a crime "many" times; 34 percent admitted being "scared off, shot at, wounded, or captured by an armed victim"; and nearly 70 percent knew a "colleague" who had abandoned a crime, been scared off, been shot at, wounded or captured by a victim packing heat.

As the city's former Mayor Marion Barry once put it, "Outside of the killings, Washington has one of the lowest crime rates in the country."