Solution to Government Overreach Is in the Constitution 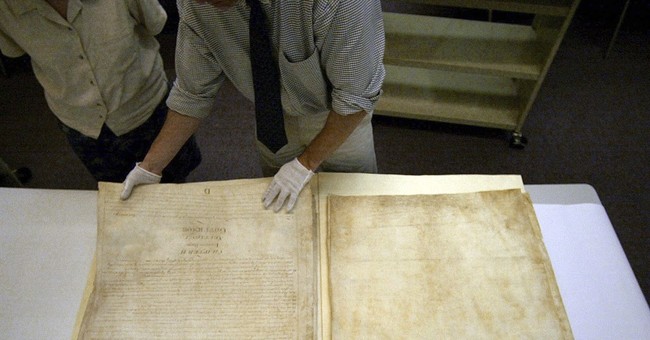 Editors note: this column was coauthored by S.T Karnick

As is clear from the rise of Donald Trump, Ben Carson, and Carly Fiorina in the Republican presidential primaries and the groundswell of support for socialist Bernie Sanders among Democrats, a large portion of the American public has become fed up with the national government’s apparent takeover by powerful special-interest groups. Each new day brings another story of bad legislation and worse court decisions giving certain classes of people advantages denied to the rest of the people.

Partisan gridlock and the battles between various interest groups have made it impossible to roll back ill-conceived government policies. Gridlock, however, is partly a product of elements of the Constitution the nation’s founders considered essential. James Madison, the fourth president of the United States and widely considered to be the “Father of the Constitution,” was well aware of the potential for gridlock, and he saw it as a positive thing.

Writing in Federalist No. 62 about equality of representation in the Senate, Madison noted, “As the facility and excess of law-making seem to be the diseases to which our governments are most liable, it is not impossible that this part of the Constitution may be more convenient in practice than it appears to many in contemplation.” The policy is good, he observed, because it makes it more difficult for the national government to act.

Elaborating on that thought, Madison wrote, “It is a misfortune incident to republican government, though in a less degree than to other governments, that those who administer it may forget their obligations to their constituents, and prove unfaithful to their important trust. In this point of view, a senate, as a second branch of the legislative assembly, distinct from, and dividing the power with, a first, must be in all cases a salutary check on the government. It doubles the security to the people, by requiring the concurrence of two distinct bodies in schemes of usurpation or perfidy, where the ambition or corruption of one would otherwise be sufficient.”

The fundamental beauty of the U.S. Constitution is that it essentially gave everybody veto power over the actions of the national government. Nothing could become the law of the land unless both houses of Congress, the president, the Supreme Court, and the states all agreed that it should be. Any action of the national government had to run a long gantlet in order to become law.

That was an ingenious plan and extraordinarily conducive to personal freedom, but of course it was a thorn in the side of those who had greater “ambition,” in Madison’s word, for government action. The Progressive movement of the early 20th century shredded constitutional limitations in favor of an activist federal government, and subsequent decades have brought only further encrustations of Progressive overreach, resulting in a gargantuan federal leviathan that we have been unable to tame. This is partly due to the very constitutional limitations that were intended to prevent such government growth in the first place.

Fortunately, another element of the Constitution can provide a rescue. Article V was written to provide states an opportunity to rein in the national government when needed. Madison said the purpose of Article V was to enable the people of the United States to “alter the constitution or correct breaches to it.” Some 236 years later, state governments are now taking steps to curtail the multitude of breaches inflicted by the national government over the past several decades.

That approach has never yet resulted in an amendment, but the current toxic political situation in Washington, DC appears to be changing that dynamic. Twenty-seven states have already passed legislation calling for an Article V Convention to enact a federal balanced budget amendment. This year, North Dakota became the latest state to call for such an amendment. State legislatures in Idaho, Oklahoma, South Carolina, Virginia, and Wisconsin are considering similar legislation, and Republican members of Congress are scrambling to find Democrat cosponsors to reach the two-thirds majority to pass one through Congress.

As we celebrate Constitution Day, on September 17, it’s useful to remember the Preamble to the Constitution states the signers’ intention to “form a more perfect Union.” We should follow their lead. The means to do so are already in the Constitution.