Kurt Schlichter
|
Posted: Mar 21, 2022 12:01 AM
Share   Tweet
The opinions expressed by columnists are their own and do not necessarily represent the views of Townhall.com. 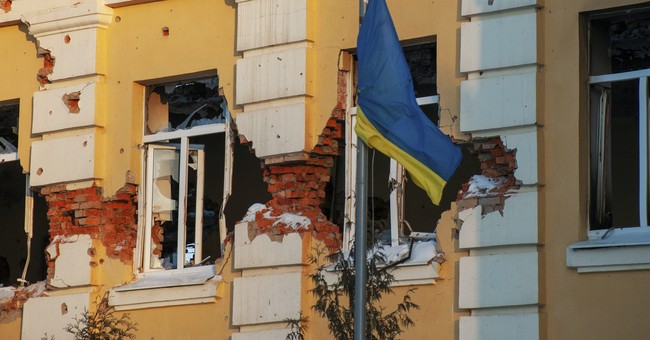 There’s this thing called multitasking and we GOP voters expect the Republicans to try it out. Democrats? Nah, because we expect nothing from Democrats. But the Dems are good at multi-tasking. Even as they pretend to be butch about Ukraine – such fakery is rivaled only by the bride’s performance on a Bulwark staffer’s wedding night – they simultaneously embrace such initiatives as schoolhouse kiddie grooming and women’s sports champions who are dudes. They can focus on more than just Ukraine. Of course, we actually expect nothing from Republicans either, but at least with them we normals have a chance to influence their behavior, even if only by threatening them with a primary by someone based who will drag them back to America from their DC estates and make them campaign amongst the unwashed.

There are a lot of miserable things going on here at home in addition to the Disney-approved kindergarten perversion propaganda and girl athletes who are boys crises. We have an elite treating the idea of free speech like Bill Clinton treated his wedding vows, gas prices higher than Cheech & Chong hanging at Seth Rogan’s place, and a border that is open wider than Ana Navarro’s pie-hole at Golden Corral’s Endless Fountain of Ham. We have a potential Supreme Court justice who thinks kiddie porn pervs should get a slap on the wrist and an election system that is a slap in the face to democracy. Burger is $7 a pound and Jussie Smollett is free – and don’t be surprised if his double jeopardy argument works on appeal!

Yeah, there are a lot of bad things going on here in the US of A thanks to that desiccated old pervert in the White House, but we’re not hearing enough about them from Republican poobahs. We are hearing a lot about Ukraine though. It’s an important issue, but we’re approaching a month of war and the tough Ukes have not given in yet. The nimrods pulling Biden’s puppet strings are still slow-walking the delivery of anti-tank missiles, which is bad. Reports say that they are refusing to give over real-time intel to the Ukrainians, lest the plucky defenders use it to target Russian units, which would seem to be the point. The MiG thing is still a thing, though it’s kind of useless in the sense that a couple of dozen Bad News Bears jets from the 80s are essentially irrelevant. So yeah, there’s stuff to be upset about regarding Ukraine. Biden’s as good a commander-in-chief as he is a father, and we need to be all over him so our military doesn’t continue to figuratively impregnate strippers even as our State Department, more or less figuratively, does blow off a foreign hooker’s fourth point of contact.

But Ukraine’s not the only thing going on. Republicans, you need to talk about other things, like the things I listed above. Not all the time, but a lot of the time. Because, here’s the thing. Our voters generally like the Ukrainians and admire such things as their toughness, patriotism, and their innovative program of handing assault rifles out to citizens. But we are getting beaten to a pulp here at home. Every Third Worlder with a bindle and a dream is hiking to the border. Hobos litter our streets with used hobo dinners. Criminals run rampant, and it just cost me 100 bucks to fill up my sedan. Look, we care about Ukraine in the sense that we wish bad things were not happening on the other side of the globe, and many of us are willing to kick in the bucks to buy some rockets to pop the top on a battalion of uninvited T-80s. But Republican congress-creatures, we’re hurting, and we keep seeing many of the biggest names in DC on TV talking about sending our kids to fight the Ukrainian’s war by prattling on about “no-fly” zones as if that is somehow merely putting Putin in time-out and not the first shot in a hot war with a crazy/stupid/evil guy with more hot rocks than Kamala has shady ex-boyfriends.

We get that a lot of Republicans are more comfortable talking about confronting the Soviets – er, I mean Russians – than talking about the issues the regime media forbids. Stepping to the Bear kind of brings back that Reagan nostalgia. We finally have a real bad guy again that we can focus on instead of all those shadowy terrorist guys in the ridiculously named “War on Terror.” Hey, I was in the Cold War. I remember all those exercises where we learned to cream an on-coming motor rifle regiment. Good times. But there are some other things going on, and your voters think those are pretty damn important too.

Of course, those other things are often icky gross culture war things, the kind of things that create awkward moments at the country club or cause your non-binary teen daughter who now calls herself “Abraham” to get really angry at you. When you can hate on Putin, you’re free of conflict with society’s elite because it has decreed Putin bad and you are just thrilled that, for one shining, fleeting moment, it is not decreeing that you are bad for being part of the GOP.

Well, get over it. The Ukraine-Russia War is not a “Get Out of Controversy-Free” card for gutless pols. You need to deal with Ukraine and the Jeffrey Toobin Zoom call-like mess that Grandpa Badfinger has made of it. But you also need to multitask and deal with the economic and cultural warfare that these leftist creeps are waging upon us here at home.

Conservatives Must Stand Together and Fight. Join Townhall VIP. And Check Out Last Week's Stream of Kurtiousness, The Latest Woke Absurdity. And my podcast, Unredacted.

Pre-order my upcoming non-fiction book We'll Be Back: The Fall and Rise of America. It talks national divorce, civil war, and all sorts of other stuff. And also get my Kelly Turnbull conservative action thriller series about America splitting into red and blue countries. The sixth, The Split, is now out, but get all these action-packed bestsellers, including People's Republic, Indian Country, Wildfire, Collapse, and Crisis!