You Libs Made Your Cesspool, Now Float In It

Kurt Schlichter
|
Posted: Nov 01, 2021 12:01 AM
Share   Tweet
The opinions expressed by columnists are their own and do not necessarily represent the views of Townhall.com. 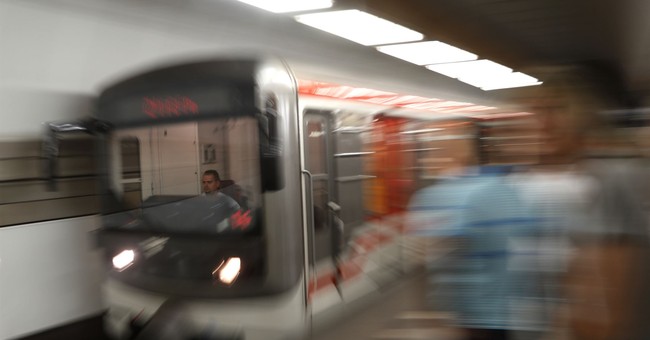 The cities are devolving into chaos, and perhaps that’s good – people too dumb to learn from experience or from those who know better have to learn from something, and if that’s pain, well, pain’s a great teacher.

In Philadelphia, some troubled youth who was illegally in this country, but had been let go on previous occasions post-interaction with the local gendarmes, decided to woo a local woman he met on a train the old-fashioned way, by threats and violence. The other passengers reacted as one might expect in a Democrat-run metropolis, and whipped out their iPhones to record the attack. Not coincidentally, the City of Brotherly Love – apparently of the kind endemic to the Omar clan – recently elected a Soros-bought leftist DA who thinks the real crime problem is people complaining about crime.

In Scat Francisco, the city that comedian Bobby Slatyon (I believe) once memorably said “makes its own gravy,” the local Walgreens drug stores are closing. The local zombies – drug-induced ones, not to be confused with the one occupying the Oval Office – like to stagger in and load up on the goods from the shelves, then carry their loot outside and sell it. Again, not surprisingly, the City (I grew up just outside of it and it has always referred to itself as “the City” though now, thanks to its bountiful harvest of bum droppings, a vulgar, rhyming adjective is more apt) recently elected a – wait for it – Soros-purchased DA who doesn’t believe in prosecuting criminals, which makes it challenging to do his job of prosecuting criminals.

Then in New York, an angry gentleman punched out a woman on a subway train. The assault was caught on video, but the assailant wasn’t caught – the other passengers went full Kitty Genovese by way of Sergeant Schultz and saw nothing. The local DA is really focused on gang-busting the kind of criminal activity that affects every day New Yorkers – like whether reimbursements to employees of the Trump organization were properly characterized for tax purposes.

I would rail and wail about how the cities are turning into chaos, but then, I don’t live in one. I live in an affluent suburb by the beach where we don’t put up with that crap. You whisper “Cops” and five back-and-whites show up looking to drag away what ever scumbag is getting out of line.

But the city dwellers choose to live like they do. It’s democracy in action. They voted for chaos, and they should suffer for it appropriately.

It is kind of sad that the rest of us will now avoid the cities, but I can live without them. ‘Frisco was always arrogant and boring. I used to go there back before I got married to see friends and it was, even then, full of dumb, commie people who think they are smart and girls so ugly that they would get passed over in DC, which is saying something. Now it’s worse, with hordes of savages chasing you as you dodge mounds of hobo excrement – hard pass. Philadelphia has the Liberty Bell and cheesesteak sandwiches and little else, while today’s New York is like Vegas – fun for about 72 hours then you have to leave. That assumes you are willing to produce your papers to go in anywhere, and I am not.

This is why I do not get all up in arms when the locals don’t jump in when they see strangers get attacked. After all, they are simply obeying the rules they themselves made. I’d like a society where people intervene, where some disease-ridden pervert puts a paw on a woman and a thicket of handguns emerge from the belts and purses of the surrounding citizens and the miscreant is then marched off to a dungeon. But the locals don’t want that, so they don’t get it.

It’s very clear that these voters have voted for the rule requiring they be passive observers to crime, so when the witnesses shrug as thuggo goes to town, we need to understand that the city dwellers’ situation is their own doing. You can’t get a gun permit in SF or NY, yet someone expects you to take on a criminal who is not going to observe those legal niceties? How could you expect that? If you want to build a house, you don’t ban tools. If you ban tools, it’s reasonable to assume you don’t want any construction.

And imagine, if you will, the video of you attacking the attacker playing on CNN and MSNBC 24/7 – gee, do you think that somehow you will be the good guy, particularly if you are of a disfavored race while the criminal is of a favored one? Yeah, right. “Evil KKK supporter probably attacks local honor student after being inspired by DeSantis’s insurrectionist climate denial!”

Remember the parade of degenerates threatening the St. Louis couple who gunned up to defend themselves? Remember who the Soros-owned DA made the bad guys – not the hairbags invading the neighborhood but the innocent citizens defending their home. You are quite literally putting your freedom and fortune – not to mention your life – on the line by defending yourself or others in one of these hellholes. Do you think they won’t prosecute you? You, the normal citizen, are these communists’ dream defendant. Will you get convicted? Maybe, then maybe you’ll eventually get out on appeal, after you lose everything. Or not. Just look at all the people who made the mistake of getting involved and are put through hell and ask yourself – is it reasonable to ask you to take that risk to protect people so stupid they voted for the chaos they would now expect you to extricate them from?

If they want a society where fellow citizens save others from criminals, they will vote accordingly. Until then, they will get what they voted for – and what they deserve.

Conservatives Must Stand Together and Fight. Join Townhall VIP. And Check Out Last Week's Stream of Kurtiousness, Is Glenn Youngkin Going to Win? And my podcast, Unredacted.