People Are Getting Tired of Woke Nonsense

Kurt Schlichter
|
Posted: May 20, 2021 12:01 AM
Share   Tweet
The opinions expressed by columnists are their own and do not necessarily represent the views of Townhall.com. 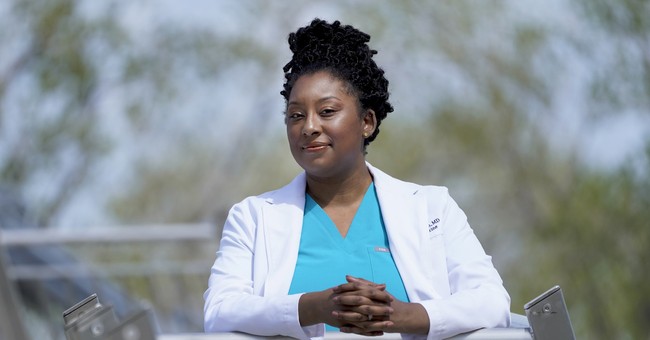 We may have reached peak woke recently when some doctor got in a Twitter huff because a peasant of pallor did not detect the MD lurking within her, and this is a very good thing. This kind of foolishness will help us sooner consign wokeness to the fiery dumpster of history. The moral bankruptcy of wokeness should lead to its demise, but the abject stupidity of it might just kill it off first.

Now, the tale is as tiresome as you can imagine – apparently a “middle aged white woman” heir to Bull Connor – who was a Democrat – dared to ask the finicky physician if Her Medical Majesty worked at the store they were both shopping in and thereby assumed that Dr. Brittani James was a mere retail worker. I know, right?

No, it could not have been an innocent mistake – Occam’s Razor is racist too, apparently. Instead, this was clearly a hate crime that harkened back to the olden days, when bands of hooded Democrats with torches would ride the countryside, terrorizing black folks by asking them if they could supersize the Klansmen’s happy meals. Move over, Harriet Tubman, Fussy James has a real tale of racial oppression to tell. I bet a movie chronicling her trauma would win Best Picture; acting legend Nick Searcy could appear as the therapist who helps her move past the pain.

It’s so obnoxious. On May 15 – incredibly, on purpose – Doc tweeted: “Minding my own business shopping and a middle-aged white woman asked me if I work there. When I looked at her blankly and answered back in a deadpan voice ‘no’, she giggled it off and said ‘I was just wondering where to put this shirt back’. But I’m a bad person if I go off.”

Well, yeah. You are a bad person for going off. You’re terrible – snotty, snobby, and so full of yourself you should write yourself a scrip for extra-strength Dulcolax® to empty yourself out.

But she wasn’t done. The sour sawbones doubled down with: “Kicking myself for not saying “I’m a physician” and letting her die of embarrassment. But something tells me she wouldn’t even have the decency to be embarrassed. Most of these types don’t.”

First, who are you calling “these types?” Seems kinda racist. And second, somehow I doubt the poor mistaken woman would die of embarrassment, especially considering that she did nothing morally wrong.

Next, the medical malcontent tweeted, “Stop asking Black people why they are angry. I can’t even shop in peace.” But no one’s asking why she was angry because she shouldn’t be angry that some nice lady mistook her for a retail worker – as if that is some sort of slur. Should one be ashamed to work at a store? Better keep those uppity waiters and waitresses in their place! Heaven forbid someone expect respect if he wrangles feces as a mere plumber! Behold – a doctor! On your knees, proles. We’re not worthy!

On a victim scale of 1-10, Dr. James is about a .0006. But this privileged practitioner has got to take what she can get when it comes to systemic racism, I guess. It’s just that she is going to be so bummed and feel so silly when she hears about (Democrat enacted and enforced) Jim Crow.

This petty grievance-mongering is of a kind with the ever-popular “I have an unusual name and you’re racist if you don’t instantly know how to pronounce it” whine. You get some twit, almost inevitably a young, affluent woman whose greatest life challenge to date was getting that gender studies degree at Gumbo State, and here comes her very own atrocity: “It’s so exhausting when people ask me how to pronounce my name, Ranxthalion Hilkobrunitoxhitol. It’s just more of the burden I endure every day being descended from the people from wherever the people I am descended from came from!”

Now, as the proud possessor of a weird name that almost no one knows how to pronounce, by now I should have accumulated a huge pile of grievance chits. You got Slick-ter, Sleesh-ter, Psylche-ter, plus others that incorporate the obvious vulgarity. Even the damn Germans couldn’t pronounce it consistently when I was stationed in Stuttgart. And you know what I do when someone slaughters “Schlichter?” I smile and ignore it, because I’m a grown man and not a tiresome child who yearns to be a victim of something, anything, that will make up some emotional deficit inside of me. I have these Townhall columns for that.

Now, as insufferably stupid and entitled as it all is, we should still be intensely grateful for this kind of performative outrage over the most micro of microaggressions for two reasons.

First, all of us should be on our knees thanking God that we live in a country where intramural hate manifests as not detecting one’s medical license or failing to be a linguist fluent in each of the world’s myriad tongues. I served in Kosovo, where people burned their neighbor’ homes and buried the murdered in mass graves, and I think those folks would be thrilled beyond measure to dwell in a place where the greatest challenge to ethnic harmony would be issuing occasional corrections about one’s employment status and name pronunciation. We are blessed to live in a nation that is so generally peaceful that the best these drama queens can do to peg the oppression-o-meter and redline the oppression they so desperately want with this kind of frivolous nonsense.

And there’s another reason to be glad dumb people are howling about puny slights. Wokeness has survived as long as it has via seizing the moral high ground by falsely asserting that the wokies are fighting bigotry. Of course, what wokeness is really about is enshrining bigotry in our society and leveraging it for power. But, while we are conserva-woke to this scam, many normal folks are not. It takes time and repetition to explain that the cynical hucksters calling themselves “anti-racists” are actually the only significant group of active racists left in society. But everyone understands immediately that harumphing all over social media because some nice lady mistook you for a clerk is stupid.

Wokeness is jumping the shark, and it looks ridiculous. And looking ridiculous is the first step to it being rejected.

Conservatives Must Stand Together and Fight. Join Townhall VIP. And Check Out Last Week's Stream of Kurtiousness, Jimmy Carter II: The Revenge.

My sixth Kelly Turnbull action thriller, The Split, drops in June. Get the most recent bestseller, Crisis as well as my other four novels about what happens when America splits into red and blue countries, People's Republic, Indian Country,Wildfire, andCollapse!