Women Always Have To Pick Up The Check For Democrats

Kurt Schlichter
|
Posted: Aug 31, 2020 12:01 AM
Share   Tweet
The opinions expressed by columnists are their own and do not necessarily represent the views of Townhall.com. 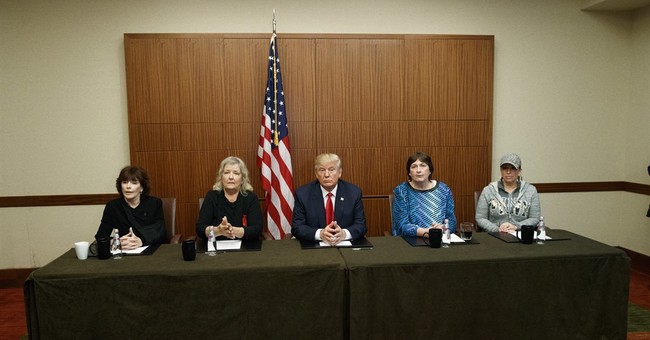 For a party that toots its own horn about how it’s all-in for the ladies, the Democrat Party sure has a weird way of showing it. The fact is that when the check comes for its dangerous and degenerate policies, every single time the Dem dudes dine and dash and stick the chicks with the bill.

Let’s look at some of the Dem dudes who do it, starting with the aptly named Bill Clinton. Mr. Felonia Milhous von Pantsuit was all too happy to use women as his personal playthings with varying degrees of consent, ranging from none to “I always wanted to do it in the Oval Office!” And the feminists, the media and the rest of the Democrat Party adjuncts gave him a pass. Some were willing to give him even more. The message was simple: if you are called upon to be a Clinton sex toy, kneel down then shut up for the cause.

This is a Democrat tradition. JFK, when he wasn’t tapping the help he was pimping them out to his buddies in the White House pool. His dalliance with Marilyn Monroe was one thing – she was a consenting adult who could have told him to pound sand (or something else). It’s his serial preying upon the interns and secretaries and other assorted Dem doxies in his orbit that really demonstrates the essential contempt for women that drove his satyriasis – and that (which along with its traditional racism) still drives the Democrat Party.

Oh, and speaking of driving, no discussion of the chronic Democrat abuse of women would be complete without observing that the Lion of the Senate left his booty call du jour to drown in an Oldsmobile at the bottom of a pond. And the same message we hear over and over again to protect Democrat exploiters protected Teddy Kennedy – hey Mary Jo, take one for the team.

She didn’t have much choice about taking one for the team since, in those last agonizing minutes, she couldn’t take a breath.

But hey, Teddy saved abortion, and his ceaseless campaign for a perpetual open season on troublesome fetuses makes it all worthwhile. Abortion is another of those Democrat policies that women get to pay for. The idea that it is somehow empowering or liberating for women is so much garbage. It’s empowering and liberating for men who don’t want to reap the result of their sowing.

Right on, guuuurl, get on up in those stirrups and show The Man you’re the one in control. Hey, I’ll even chip in and maybe even pay for your Uber. Remember, it’s about you and your future and come on, let’s go, hurry up, sure, I’ll totally call you after. Totally.

Which is why the Dems’ defund the cops/disarm the law-abiding initiative is so anti-woman. We had an illustration of this last week in the context of the shooting of Jacob Blake. Blake had a warrant out for sexual assault related to a domestic abuse. He was apparently at the home of the woman he had allegedly assaulted – “allegedly,” because the “Believe all women” rule never applies when, as here, it hurts the liberal narrative – in violation of the protective order she took out to keep him away. So, the cops weren’t there to hassle an innocent man pausing while traveling between the soup kitchen he volunteered at and the school where he was an honor student. The cops were there to protect her from a man who allegedly sexually assaulted her once before and who ignored an order to keep away.

They confronted him, he resisted, he did not comply with their orders, he had a knife and he reached into a car where he could have easily grabbed a pistol and killed those officers. Of course they shot him, and yes, in the back – this isn’t a duel and they are not somehow morally obligated to give him a fair chance to murder them.

The Democrats always side with the criminals, and against the cops, and also against women. Because what happens the next time the cops come to a domestic call and the wanted alleged rapist is being noncompliant? Do the cops just stand there as the fugitive rummages around his vehicle, waiting until the crook decides if it’s going to be a shootout? Do they put their lives at risk?

And if Kamala Geppetto Harris gets her way – Grandpa Badfinger will be wandering around the Rose Garden with his bathrobe flopping open chasing butterflies – that woman can’t even have a gun to protect herself.

Notice how the Democrats never say “Women’s lives matter?” It’s because the evidence is clear that to Democrats, women’s lives don’t matter. At least not as much as Democrat power and pleasure does.

A world without cops and without guns is a world where women are beaten, broken and abused. But that’s the world the Democrats seek. Once again, women get to pay the price for the Democrats getting what they want.

Maybe women should consider getting out of their abusive relationship with the party of misogyny. But hey ladies, if you’re dumb enough to keep picking up the tab, the Dems will happily keep sticking you with the check.

Join Townhall VIP and get my new book The 21 Biggest Lies about Donald Trump (and You!) it’s your field manual for fighting the Dems’ and media’s (okay, that was redundant) lies about Donald Trump. It’s also now in audiobook format as read by the great Tony Katz! Get it or die alone and unloved!