Kurt Schlichter
|
Posted: Nov 15, 2018 12:01 AM
Share   Tweet
The opinions expressed by columnists are their own and do not necessarily represent the views of Townhall.com. 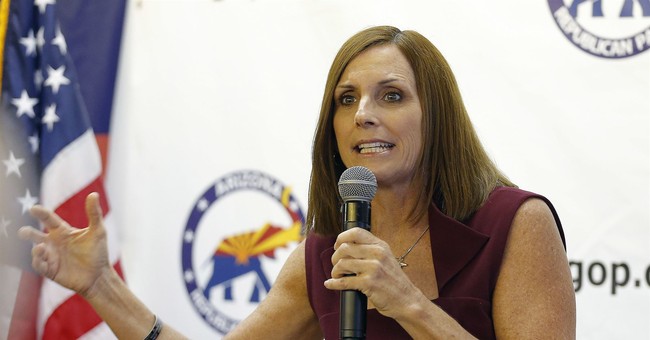 The good thing about screwing up is that you can learn from your mistakes and do better next time. That, of course, assumes you are not a Republican Party official, because the GOP Establishment seems largely incapable of learning from its mistakes.

We should try again anyway.

We won some races, but we lost a lot more. Losing has one advantage over winning – pain is a better teacher than joy. After all, winning generally teaches you the wrong lessons. It makes you complacent. Look at Texas. The governor did worse than expected; Ted Cruz had a close call, and down ballot the Texas GOP got thrashed. In Texas. With a great economy. Because the Texas GOP got soft from too much winning.

Look, there are sometimes reasons for poor performance that are beyond our control. Tex Kennedy poured $70 million into the race, and the Democrat transcriptionist media nearly flooded Houston all over again slobbering all over that skateboarding goof. It’s no surprise that these factors had an effect – I don’t blame Ted Cruz, but I do blame the guys who were supposed to be keeping the Lone Star State red. The Dems went out and mobilized people who had not been mobilized before. The GOP should have done the same with its own people long ago – it should have had its grassroots wired. But it didn’t, because for a couple decades it didn’t need to. Well, it needs to.

Lesson One: Never get into the mindset that you can’t lose. Always play like you’re 10 points back, which is what saved Ted Cruz.

Let’s look at Arizona. If resumes were competing, Martha McSally, A-10 pilot, would have crushed Pinko Barbie. But resumes don’t run for office; people do. My AZ pal Jon Gabriel has a deep dive post-mortem, but there are some key lessons we have to draw from this ~1 point debacle. McSally is an admirable person who decided to run on “I’m impressive and not one of those conservative kooks” instead of on “Here are the things I stand for that I will get done.” Now, Sinema also ran a campaign based on personality – “I’m nice and oh so moderate.” So why would the average person pick McSally over Sinema if the only difference was “Impressive” versus “Nice?” What was McSally for?

Not being either Sinema or a conservative?

Hardly inspiring. Here’s an alternative idea. How about you embody the conservative values the GOP base wants? How about you not channel Jeff “18% Approval” Flake by launching Operation Desert Sasse and imitating the gutless weenie vibe of the same dork who you were seeking to replace because the GOP base fired him for not being conservative enough?

Trump endorsed her, but like he had a choice. It kind of shows the mindset that led to this fiasco – Well, these conservative dummies will be dazzled by Trump’s thumbs-up of necessity, so we don’t need to pay attention to them. Wrong! McSally had a bloody primary against Kelli Ward and Joe Arpaio – say what you want, but they stood for something, and it was something the GOP voters liked. But did McSally go on stage with the defeated primary candidates to show unity? Not that I know of. I do know she skipped out on conservative events and cancelled appearing on the Mark Levin Show. That is certifiably insane.

She ran away from being conservative, and – surprise! – when she looked back the conservatives were not behind her when she needed them. As my new book Militant Normals: How Regular Americans Are Rebelling Against the Elite to Reclaim Our Democracy explains, we’re tired of being disrespected by GOP candidates who seem to find their own voters slightly icky. That 2% edge McSally needed to win was right there for the taking among the Ward and Arpaio fans, but she shunned them. She didn’t want to scare the neurotic suburban mommy demo that these squishes always seem to chase and never quite catch. Falling into that trap was the insight of the out-of-state consultants McSally hired and listened to – diss the people who would vote for you in order to suck up to people who would never vote for you. But those conservatives voted for Governor Ducey, and in droves.

Lesson Two: Be for something – specifically, conservatism. Nail down the base by not buying into the Fredocon notion that true conservatives should be ashamed of being conservative.

Florida is always close and crazy, being full of Floridians, but we need to understand that the “Why looky here, a whole bunch of new votes” thing is the wave of the future. Today, every blue enclave is Chicago, and if it’s close they will cheat. It’s going to happen. They are already planning on it. Remember, election theft is a part of the Democrat campaign plan just as much as ads about Republicans murdering grandmas; it’s neither an aberration nor a rarity, but a deliberate strategy that has worked in the past. The people who will steal our elections are not Russians; they are the nitwits who are babbling about Russians stealing our elections.

Lesson Three: We need to be ready. We need lawyers prepositioned and poised to fight wherever we expect the corruption to happen. And we need to win races outside the margin of fraud.

We got slammed below the fold. We lost 300+ stage legislature seats on November 6th. Remember how smug we were about winning 1000+ seats during the Obama years? Change is inevitable, and in a split nation we have to lose some seats sometime, but 300+? Do we have a coherent plan for recovering them? The state government seats are our farm team of future talent and they will have a huge effect on redistricting after the next census. A seat in the Idaho House of People Who Live In Idaho is not as glamorous a US Senate race, but it’s important.

Lesson Four: We need to get back in the fight down ballot. Who is the GOP leader in charge of that nationwide? If the answer is “Shrug,” that’s the wrong answer.

Finally, we need good candidates. They are out there. The search for our stars in 2020 started November 7, or at least it better have. We need a solid candidate on every ballot. Again, who is the GOP official in charge of recruiting? What is his/her/xir name?

And we need to be picky in our primaries. You know the guy who lost to Flattop Jerk in Montana? Turns out he had some baggage those of us out here in the rest of America did not know about. Montanans voted for Trump by pretty big margins; they didn’t turn into SJWs in the last two years. But they felt that liberal creep Jon Tester represented them better than the GOP candidate – why? What were their concerns that our party ignored, that our GOP voters ignored in the primary? Let’s vet our candidates better – not just the party functionaries but those of us who vote in the primaries need to be much more careful.

Losing sucks. But you know what sucks worse? Losing twice in a row. So we Normals need to get militant and demand that our GOP Establishment try something new – like learning from its mistakes.