Kurt Schlichter
|
Posted: May 25, 2017 12:01 AM
Share   Tweet
The opinions expressed by columnists are their own and do not necessarily represent the views of Townhall.com. 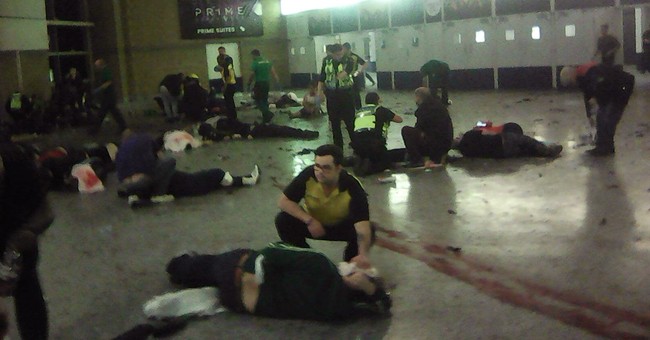 Enough of changing your Facebook photo to the flag of the abattoir du jour, enough of the candlelight vigils, and enough of the #_____Strong hashtags. No more pleas for unity and pretending not to understand. We’re not unified, and we all understand, even if we refuse to admit it because of some bizarre suicide pact Western culture decided to join when no one was looking.

Say it, damn you.

Then I’ll say it, for those of you too weak and dishonest to.

That’s our enemy. Our enemy, not just a bunch of misguided potential pals who would love us if they only understood how sorry we are for whatever sin we committed, or that some Crusader committed 800 years ago back when the men of the West were actually men and not the whimpering Ken dolls we watch pretending to be the best and brightest of our elites.

There is only one appropriate reaction to the kind of people who strap on bomb vests packed with nails and wait for smiling, laughing tweens to come along before hitting the detonator and ripping their limbs off and tearing their guts out.

The only appropriate reaction is righteous fury that turns into a grim determination to exact a retribution upon the bomber’s bros so thorough and so comprehensive that in a thousand years the few descendants of the survivors will still terrify their children with the story of the vengeance exacted by the avengers of the West.

And then our enemies would fear us. Which they don’t today. Today, they laugh at us. And they should, because we are ridiculous.

They laugh at us for being fools who think that with just a little more submission, just a wee bit more self-abasement, our enemies will accept us as friends.

They laugh at us for being fools whose response to spilled blood is flowers and cards and tweets.

They laugh at us for not having a fraction of the faith in ourselves that the terrorists have in themselves.

They’re willing to blow themselves into chunks for what they believe in.

We’re not even willing to take our own side in this fight.

Yeah, the West is theoretically at war with them somewhere far away, or rather, we’re playing at war with a few soldiers and some bombs. It’s war on the cheap, and this campaign may eventually wear down the ISIS caliphate so that that one pustule of Islamic radicalism is lanced, but it won’t be victory. They’ll just pop up again, in Yemen or Somalia or Afghanistan, where we have futzed around for 15-plus years and those pedophilia-loving creeps still hold most of the ground. We sort of fight a sort of war to sort of hold them at bay for a little while.

But it gets worse. We invite them into our countries, willy-nilly, sacrificing what we are so they can remain what they always have been, and on our dime. Do we screen immigrants to make sure they adhere to our values and our beliefs, or do we somehow feel we have no right to decide who comes into our nation and just shrug?

We shrug. We see it again and again as our people are slaughtered and we simply act like it was all somehow inevitable. That mass murder on our soil is something we just have to get used to.

We know who they are and we know what they want. But the suicide squad that is our elite would rather prove its virtue to its emasculated self by placing its weird multicultural fetish above our kids’ lives. We elect a president who wants to slow down the influx of refugees so we have a chance to figure out who the hell they are and our elite rushes to credulous courts that manufacture sanctimonious legal reasoning out of whole cloth to ensure that our people are kept defenseless.

So elite multi-cultis can feel good about themselves. Our lives are a small price to pay for their smug.

When something is truly unacceptable, you can tell because we do not accept it. But we accept terror. We won’t do what it takes to win. The solution is obvious. It’s right there, and we all know it, but our elite is largely willing to let scores of us die rather than admit the truth that none of them dare speak.

The answer is not fake solidarity and social media memes and sacrificing a few little girls here and there so we can avoid calling out the lies we have allowed to castrate us.

The answer is destroying the enemy in war zones thoroughly and completely. It is to take up arms and crush our enemies, not just tread water in this sea of blood.

The answer is not tolerating jihadism at home, meaning not tolerating it. It means excluding people from radical hotbeds who do not convince us – notice where the burden of proof lies? – that they wholeheartedly embrace our values and traditions.

It means imprisoning or expelling those who slip inside our borders and cavort with these bastards and their scummy ideology. For those who are not citizens and are here in our land by our grace, any manifestation of the cancer of jihadism must be immediately met with a pack of beefy ICE agents who hustle the dirtbag onto the next 767 back to his hellhole of origin.

And it means we must stop pretending to accept the evil manifestations of radical Islam they shove in our faces. Women being forced to wear body coverings is not some beautiful expression of feminism, as affluent liberal white womyn insist when they aren’t blaming Trump because no man loves them. They are emblems of hate. Sharia is a sick and primitive totalitarian system that has no place in America – and we must say so. Female genital mutilation is simply an abomination, and we should no longer ignore it in order to attack softer, stupider targets like “misgendering” and “phallocentrism.”

Because we have a right to be angry.

Because anger is the first crucial step to fighting back.

Because if we can see two dozen little kids blasted to shreds and not get angry, then maybe we deserve to live as the slaves of these 7th century savages.