Kurt Schlichter
|
Posted: Nov 07, 2016 12:01 AM
Share   Tweet
The opinions expressed by columnists are their own and do not necessarily represent the views of Townhall.com. 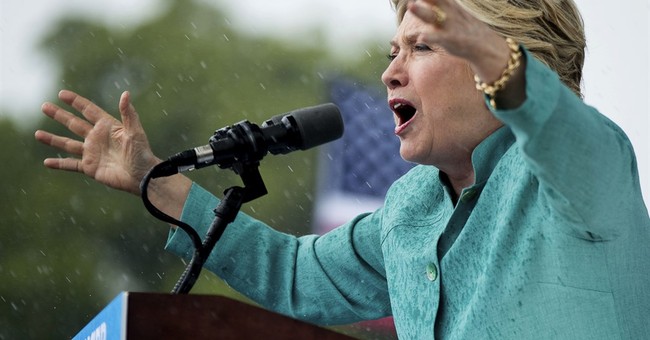 I was not happy to vote for Donald Trump, but Hillary Clinton must be stopped. She and her coterie of soft-handed, Chardonnay-sipping fascists are, in equal parts, malignant and stupid, and many of us believe her hate-fueled pogrom against normal Americans will stand a significant chance of leading to real civil conflict. I’ve seen with my own eyes what horror awaits at the bottom of the slippery slope of corruption and oppression, and I’ve warned of it again and again. This dumb woman’s personal psychodramas are poised to fuel a rocket sled ride downward to disaster.

We have to stop her. We have to elect Donald Trump.

How screwed are we when that’s the best case scenario?

I could have chosen not to sully my hands by voting for Trump. I live in California, and my vote is going to be swamped by the ballots of millions of idiots determined to turn the Golden State into a Venezuela with more kale and silicone implants. But I’ve been outspoken that I want Trump to win because of the existential threat of Hillary Clinton, and an Army officer (even a happily retired ones) does not ask others to do what he is unwilling to do. So, since I have asked others to dive into the cesspool by voting for someone with Trump’s myriad character and ideological shortcomings, it’s my obligation to lead the way and vote for a guy who is only marginally more qualified for the presidency than Mayor McCheese.

Why is it so important? Why can’t we just sit this one out by voting for Lil’ Kojack?

Look, I get the #NeverTrump crew, as the cancelled checks from my contributions to Ted Cruz’s primary campaign testify. I agree with everything they say right up to the moment they say they can’t suck it up and pull the lever for Trump. My argument is simple. Hillary is worse – exponentially, terminally worse – and this necessitates supporting her marginally less awful opponent even though he was maybe my 14th choice out of 17 candidates (I still think Jeb! is worse, and no, he would have had zero chance of winning where Trump at least might pull it off).

Many of my #NeverTrump friends have been persuaded by this argument – not by me, but by the ever-mounting evidence of Felonia Milhous von Pantsuit’s utter moral rot that somehow slips through the nets laid out by her media lackies. The looming prospect of this cankled monster infesting the Oval Office focuses one’s mind wonderfully.

Others have not been persuaded, and they can do what they feel they must – I respect most of them and expect to join them for a big group hug starting Wednesday because we have many battles to fight regardless of the outcome. But I don’t need to hear from the ones who feel compelled to lecture those of us reluctantly voting for Trump, the posers who spit out words like “honor” and “courage” at people who are willing to do the hard and unpleasant thing necessary to save this country while they sit back, comfortable and smug. You can choose not to help defeat Hillary Clinton – or even actively assist her – but don’t ever confuse holding to your principles with holding some sort of moral high ground over those of us who tried to stop her.

And she must be stopped. Everything Clinton comes in contact with is fouled and corrupted, and we cannot allow our country to fall into her wretched harpy claws. She turned a charity into a criminal racket. If her corrupt pal Obama was not going to pardon them – and he’s totally going to pardon them – she would have turned a dozen of her aides into convicted felons. She’s even poisoned the already mortally ill press, compelling it to shed the objectivity it at least used to try to pretend it possessed and become her docile cheerleader. In doing so, we normals have been mobilized to detest the corrupt media as never before. Her legacy is a slime that smears everything she touches.

Win or lose, Clinton – who will likewise be pardoned by Faily McWorsethancarter – is going to go on to live a comfortable life, enjoying her tens of millions of graft proceeds, screaming incoherently at her staff, and numbing the pain of her rejection by her father and husband (and, hopefully, America) with tumbler after tumbler of chilled, soothing Crown Royal – oh, how it takes the pain away! But in her wake, as the Clintons always have, she’ll leave a trail of smoldering debris and ruined lives not seen since the last time Godzilla wandered through Tokyo.

Between Wikileaks, her email scandal, the utter corruption of her foundation/slush fund and her promises to appoint judges who will ignore the Constitution to impose via judicial fiat laws she cannot convince Congress to pass, Hillary is a waddling, half-sloshed constitutional crisis just waiting to happen. She is evil, and she hates people like you and me. She wants to enrich herself and her cronies while hurting us – those are the key drivers of her policy schemes. She will push and push, never imagining the consequence of her campaigns to impoverish us and steal our freedoms is that it will inevitably provoke her victims to push back.

She seeks to change the First Amendment to make it possible to pass laws to criminalize criticizing her. Good-bye, Citizens United.

She will seek to limit and stifle the free expression of conservative media. Here come the Fairness Doctrine and other regulatory attacks. She wants us silenced so we can never rise against her and her cronies again.

She will make permanent the dual justice system created under Obama, where people like us suffer under one set of rules, but the connected live under another. Bid farewell to the rule of law; welcome to the rule of power.

She will seek to satisfy the climate liars by ending the exploitation of our energy resources and thereby impoverish the (not coincidentally) conservative regions whose economies depend on it. Want a preview? Look at California outside of the wealthy blue coasts.

She will import countless foreigners in order to replace an uncooperative electorate with one more to her liking. We will pay the price in blood and economic disruption.

She will turn the IRS, FBI, DOJ, NSA, and every other acronym in the federal inventory against her political opponents.

She will attack our religions, conditioning tax policy on obedience to her progressive catechism, and compelling religious hospitals to collaborate in the dismemberment of babies. She correctly sees religion as a potential obstacle to her rule, and she will seek to crush it.

She will attempt to disarm us, to make us powerless and permanently subservient. Don’t believe her lies – she is coming for our guns. She cannot tolerate the citizenry’s ability to defend the Constitution and to resist liberal fascism.

I believe Hillary Clinton’s malice and stupidity is likely to cause violence when she pushes people too far by attacking their livelihoods and freedoms. People do not want me to say this out loud – apparently, it’s now “dangerous” to tell the truth and “irresponsible” to warn of dangers if doing so is disadvantageous to liberals. Who knew? Well, I missed that memo. It’s vital to say such things, and besides, I will say whatever I damn well please. Better I say that today than “I told you so” tomorrow.

Some claim that this concern, based largely on my experience overseas in the wake of a civil war, is wishful thinking. They say I and the many others who worry about Clinton’s potential for creating civil conflict means we want civil conflict. At one point, that analysis could be merely a good faith misunderstanding of what we are saying, but at this point, such claims are disgraceful lies. You will not slander us into silence about the threat your candidate poses to our freedom and our safety.

Hillary Clinton, with her seething contempt not only for the Constitution but for that “irredeemable” and “deplorable” half of all Americans, is a manifest danger to our country. I don’t want the world my book depicts to come true. That’s why we must stop her. And the only way to do that is to vote for Donald Trump.