Kurt Schlichter
|
Posted: Sep 01, 2016 12:01 AM
Share   Tweet
The opinions expressed by columnists are their own and do not necessarily represent the views of Townhall.com. 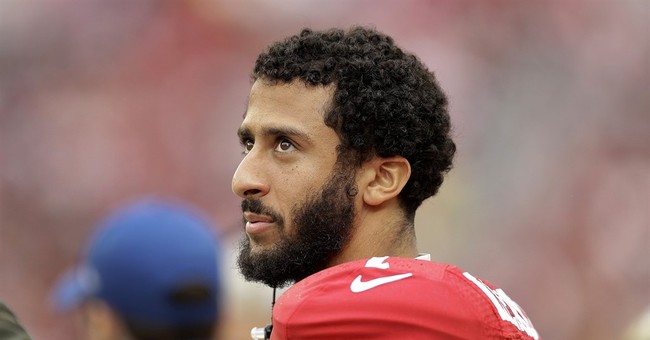 I want to thank Colin Kaepernick for teaching me what true bravery is. Before his powerful act of resistance to America, I thought heroes were the kind of guys and gals I served with in the Army. But I’ve learned that being a hero really means being willing trash your own country and thereby risk drowning in the tsunami of slobber spilling from the pie hole of every leftist dork from here to ESPN’s studios.

Get ready, surviving Tuskegee Airmen! The zillionaire manchild with a room full of colorful sneakers is going to help you get woke. Prepare to receive a knowledge download on oppression from a pampered prince who is unworthy to kiss your combat boots.

I get a lot of grief for having absolutely no interest in following, watching or even acknowledging the existence of football and all the other sports people care about. And this just proves I’m right. Colin Kaepernick is a buffoon, but he is a buffoon empowered by a lifetime of people who have indulged, excused and sucked up to him ever since he demonstrated what is apparently merely a mildly above-average ability to throw a leather orb at some other guy in tights.

The only thing more sickening than Kaepernick’s utterly ridiculous posturing is the outpouring of excuses and justifications being made for it. Some of them come from people who flat out hate the United States of America – there’s always a slimy segment of the population that quivers in orgasmic delight when offered the opportunity to disrespect the great nation upon which they feed like parasites, free to be damn fools through the exertions of better men and women. They would love nothing more than to normalize contempt for their country, and it must kill them whenever they see a soldier walk by unspat upon. Not that they would do any spitting themselves; they aren’t going to risk getting a punch to the neckbeard for hocking a loogie at some 11 Bravo.

Then you have the folks who love everything about America except America’s past and present and its inhabitants. These are the kind of people who argue that, because America waited ~70 years to engage in a war in which hundreds of thousands died in order to free the slaves instead of doing it right away, its history is one of unblemished evil and it has forfeited any legitimacy 150+ years later. Of course, these graduates of the John Oliver School of Lib Cliché History neglect to mention those hundreds of thousands who died in order to free the slaves. In court, the response to offering such evidence would be “Objection! That fact hurts my case!”

President Obama and Hillary Clinton fall into this category. Whenever they have to stand up and pretend to love this country, it’s pretty clear that they think America would be much better off without any actual Americans.

Then there are the folks who don’t get how the whole free speech thing works. Let’s take it from the top: Just because you exercise a right does not necessarily mean you are not a blithering idiot. If that were the case, then the many quarter-wits sounding off about how Kaepernick is some sort of hero for merely using the rights his sorry rear end neither earned nor defended should be rallying around Donald Trump. I mean, Trump is speaking freely, so by their logic they hate everything America stands for by disagreeing with him.

Wait, what? This is where they explain that it’s different because they don’t agree with Trump.

And it’s baffling that actual adult men and women will argue, with a straight face, that Kaepernick’s exercise of his First Amendment right to sit on the bench – which he apparently has little choice about – forecloses our First Amendment right to point out that he’s a damn fool. It’s hard to provide a cogent legal critique of that viewpoint because that notion is so utterly alien to American jurisprudence. Suffice it to say, in the words of (perhaps) Justice Oliver Wendell Holmes, “That’s so not a thing.”

And then there are the people who call Kaepernick “brave.” Some people really think that this tattooed goof is taking a risk. Of what? Of being celebrated by the liberal media? Of getting attention his abilities on the field sure won’t earn him? Hell, the NFL won’t even clearly repudiate his idiotic views; of course, it also won’t let the Cowboys honor the cops some other Black Lives Matter fan murdered. That’s another reason to eschew pro sports. It’s been assimilated into the liberal fascist Borg. The NBA is now boycotting states that won’t let men lurk in womens’ restrooms - who knew guys who throw balls through hoops had a stake on where people pee? What next – is NASCAR going to mandate “COEXIST” bumperstickers?

The real heroes are those Tuskegee Airmen, who battled oppression at home in the Democrat-dominated South and yet who became legends fighting for our country against genocidal enemies abroad. And today, young Americans walk in their bootprints as they battle a new generation of genocidal freaks overseas.

They are the real heroes. Their legacy is written forever on the pages of history in the blood shed defending what this jerk and his pathetic ilk take for granted. And Colin Kaepernick? He won’t even merit a footnote.