You Owe Them Nothing - Not Respect, Not Loyalty, Not Obedience

Kurt Schlichter
|
Posted: Jul 04, 2016 12:01 AM
Share   Tweet
The opinions expressed by columnists are their own and do not necessarily represent the views of Townhall.com. 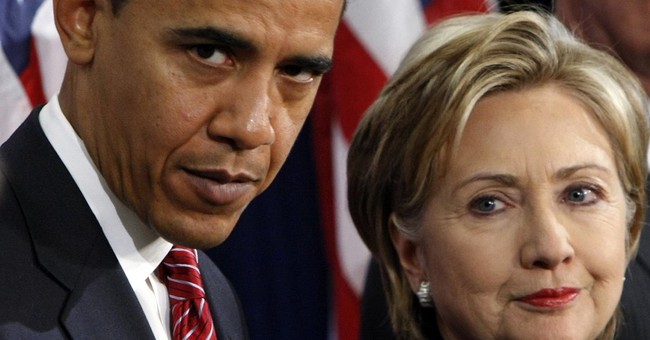 Sometimes in the course of human events, it becomes necessary for one people to dissolve the political bands which have connected them with another. It is high time to declare our personal independence from any remnant of obligation to those who have spit upon the rule of law. We owe them nothing - not respect, not loyalty, not obedience.

Think about it. If you are out driving at 3 a.m., do you stop at a stop sign when there’s no one coming? Of course you do. You don’t need a cop to be there to make you stop. You do it voluntarily because this is America and America is a country where obeying the law is the right thing to do because the law was justly made and is justly applied. Or it used to be.

The law mattered. It applied equally to everyone. We demanded that it did, all of us – politicians, the media, and regular citizens. Oh, there were mistakes and miscarriages of justice but they weren’t common and they weren’t celebrated – they were universally reviled. And, more importantly, they weren’t part and parcel of the ideology of one particular party. There was once a time where you could imagine a Democrat scandal where the media actually called for the head of the Democrat instead of deploying to cover it up.

People assumed that the law mattered, that the same rules applied to everyone. That duly enacted laws would be enforced equally until repealed. That the Constitution set the foundation and that its guarantees would be honored even if we disliked the result in a particular case. But that’s not our country today.

Hillary Clinton is manifestly guilty of multiple felonies. Her fans deny it half-heartedly, but mostly out of habit – in the end, it’s fine with them if she’s a felon. They don’t care. It’s just some law. What’s the big deal? It doesn’t matter that anyone else would be in jail right now for doing a fraction of what she did. But the law is not important. Justice is not important.

The attorney general secretly canoodles with the husband of the subject of criminal investigation by her own department and the president, the enforcer of our laws, shrugs. The media, the challenger of the powerful, smirks. They rub our noses in their contempt for the law. And by doing so, demonstrate their contempt for us.

Only power matters, and Hillary stands ready to accumulate more power on their behalf so their oaths, their alleged principles, their duty to the country – all of it goes out the window. But it’s much worse than just one scandal that seems not to scandalize anyone in the elite. Just read the Declaration of Independence – it’s almost like those dead white Christian male proto-NRA members foresaw and cataloged the myriad oppressions of liberalism’s current junior varsity tyranny.

There is one law for them, and another for us. Sanctuary cities? Obama’s immigration orders? If you conservatives can play by the rules and pass your laws, then we liberals will just not enforce them. You don’t get the benefit of the laws you like. We get the benefit of the ones we do, though. Not you. Too bad, rubes.

So if you are still obeying the law when you don’t absolutely have to, when there isn’t some government enforcer with a gun lurking right there to make you, aren’t you kind of a sucker?

Don’t you feel foolish, like you’re the only one who didn’t get the memo that it’s every man/woman/non-binary entity for his/her/its self?

Who is standing against this? Not the judges. The Constitution? Meh. Why should their personal agendas be constrained by some sort of foundational document? Judges find rights that don’t appear in the text and gut ones that do. Just ask a married gay guy in Los Angeles who can’t carry a concealed weapons to protect himself from [OMITTED] radicals.

The politicians won’t stand against this. The Democrats support allowing the government to jail people for criticizing politicians and clamor to take away citizens’ rights merely because some government flunky has put their name on a list. Their “minority report” on Benghazi is an attack on Trump, and to them the idea of congressional oversight of a Democrat official whose incompetence put four Americans in the ground is not merely illegitimate; it’s a joke.

Is the media standing against this, those sainted watchdogs protecting us from the powerful? Don’t make me laugh.

What do these moral abortions have in common? Short term political gain over principle. These people are so used to the good life that a society’s reflexive reliance on the principle of the rule of law brings that they think they can undermine it with impunity. Oh it’s no big deal if we do this, they reason. Everyone else will keep playing by the rules, right? Everything will be fine even as we score in the short term.

The Romans had principles for a while. Then they got tempted to abandon principle for – wait for it – short term political gain. Then they got Caesar. Then the emperors. Then the barbarians. And then the Dark Ages. But hey, we’re much smarter and more sophisticated than the Romans, who were so dumb they didn’t even know that gender is a matter of choice. Our civilization is permanent and indestructible – it’s not like we are threatened by barbarians who want to come massacre us.

Oh, wait. The last words of some of these people to their radical Muslim killers before they are beheaded will be, “Please remember me as not being Islamaphobic! And sorry about the Crusades!”

There used to be a social contract requiring that our government treat us all equally within the scope of the Constitution and defend us, and in return we would recognize the legitimacy of its laws and defend it when in need. But that contract has been breached. We are not all equal before the law. Our constitutional rights are not being upheld. We are not being defended – hell, we normals get blamed every time some Seventh Century savage goes on a kill spree. Yet we’re still supposed to keep going along as if everything is cool, obeying the law, subsidizing the elite with our taxes, taking their abuse. We’ve been evicted by the landlord but he still wants us to pay him rent.

Now it seems we actually have a new social contract – do what we say and don’t resist, and in return we’ll abuse you, lie about you, take your money, and look down upon you in contempt. What a bargain!

It’s not a social contract anymore – American society today is a suicide pact we never agreed to and yet we’re expected to go first.

We owe them nothing - not respect, not loyalty, not obedience. Nothing.

We make it easy for them by going along. We make it simple by defaulting to the old rules. But there are no rules anymore, certainly none that morally bind us once we are outside the presence of some government worker with a gun to force our compliance. There is only will and power and we must rediscover our own. If there is no cop sitting right there, then there is nothing to make you stop at that stop sign tonight.

They don’t realize that by rejecting the rule of law, they have set us free. We are independent. We owe them nothing - not respect, not loyalty, not obedience. But with a firm reliance on the protection of divine Providence, we will still mutually pledge those who have earned our loyalty with their adherence to the rule of law, our lives, our fortunes and our sacred honor.